Poker is war. Though we might not always recognize it as such. Poker disguises itself under the veneer of a civilized game, where chips stand in for bullets and victory is a matter of pride and money, not life and death. But what poker lacks in bloodshed it more than makes up for in the singularity of its combat; every single person is in the arena purely for him or herself. There is no team spirit, no espirit de corps. Just a bunch of people trying to take each other’s money.

In such an atmosphere, it shouldn’t be surprising that tempers occasionally flare and opponents can develop a genuine personal hatred for each other. In a game where conflict is the rule not the exception and where bad luck can triumph over skill for extended periods of time, it can be very difficult not to take losses personally and start hating on your opponents – particularly when your losses start to pile up.

Some would argue that it’s not only natural but beneficial to feel enmity towards your opponents. Not long ago, I saw an interview with Bob Gibson, the legendary Hall-of-Fame pitcher for the St. Louis Cardinals, where Gibson said that before each game he would go out of his way to find something to hate about the players on the other team. It gave him that extra bit of motivation to annihilate the opposition. Which he usually did.

But poker players generally don’t have to work at finding reasons to hate their opponents. It just comes naturally. We’re hell-bent on taking each other’s money. Trash-talk is an inescapable part of the game; in the eyes of many players, it’s just another perfectly-acceptable weapon in their poker arsenal. All it takes is a little bad luck and one abrasive opponent to create a full-blown case of poker loathing. If you do find yourself in the position of feeling hatred towards an opponent, can you possibly make that work to your advantage? Can that personal acrimony spur you on to greater competitive heights?

Probably not. Gibson’s fiercely competitive spirit may have given him an extra edge, but it also helped that he was spectacularly gifted. And he was able to shut it off when the game was over and his job was done. Only a very tiny fraction of people on this planet will ever be as good at anything as Gibson was at throwing a baseball – though heaven knows how many poker players come to the table believing that they possess that kind of talent. And poker, unlike baseball or any other sport, is purely a game of the mind. The mental sharpness and stability needed to make one good decision after another after another – all the while observing opponents, calculating odds, balancing risk versus reward, and devising strategies – is too easily lost when emotions get heated. Sometimes all it takes is one bad beat to create a personal animus that will send the most perfectly-balanced mind teetering on the edge. And from there, it’s only a short step from teeter to tilt.

The solution is to never forget that poker is business, not personal. The players sitting around your table are your adversaries. It’s their job to bust you, any and every way they can within the legal rules of the game, just as it’s your job to bust them. If you should snatch away every last chip from your opponent’s stack, every last dime out of his poker bankroll – or if he does the same to you – there should be no hard feelings whatsoever. It’s all part of the game.

Easier said than done, of course. The heat of battle can create some very powerful emotions. But we still have the choice of what to do about it once those emotions surface. In The Power of Myth, Joseph Campbell relates the story of a Japanese samurai warrior pursuing a man who had murdered his overlord. The samurai finally cornered this man and was about to strike him down when, “the man in the corner, in the passion of terror, spat in the warrior’s face. And the warrior sheathed his sword and walked away.” According to Campbell, the samurai did this “because he was made angry, and if he had killed that man in anger, then it would have been a personal act. And he had come to do another kind of act, an impersonal act of vengeance.”

Of course, no poker player would do what the samurai did. In the heat of poker “battle”, a poker player who had been angered by his opponent would not only go ahead and strike the blow, he’d probably follow up by pumping his fists and yelling “Ship it!” at the top of his lungs. But aside from the breach of etiquette, this kind of open emotionalism is not good for your game. For one thing, attitude is contagious. When you hate your opponent, it’s usually just a matter of time before he starts to hate you back. As you get more passionate about wanting to beat him, so he gets more passionate about wanting to beat you. And an emotional opponent is an unpredictable opponent. This is quite different from the tactic of deliberately using trash talk to tilt your opponents because in this scenario, you’re both really on tilt. It’s a situation that usually spirals downward and gets worse before it ever gets better.

Poker and conflict go together like fresh air and sunshine. The two are inextricably intertwined. But you can choose to view these conflicts as either substantive, or personal. In substantive conflict, it’s all about the issues at the heart of the combat. In the context of a poker game, you focus on the substance of the situation – an honest, cold analysis of your own and your opponent’s play. Like the samurai warrior, you approach the battle as a purely impersonal engagement. Substantive conflict can lead to a positive outcome. It’s a learning experience that brings you forward to a better understanding of yourself and the person you’re in conflict with.

By contrast, personalized conflict almost never rises above the level of I just don’t like you. Every time you react to a loss by thinking your opponent is a lucky SOB who isn’t worthy of taking your chips, you’re personalizing the conflict. You are scripting a story in your mind where you are the put-upon victim and your opponent is the evil moron in need of a smackdown. You cannot learn from personalized conflict, and ultimately it never leads anywhere but down and out. 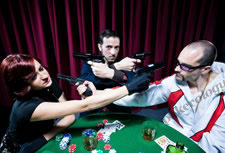 Poker and conflict go together like fresh air and sunshine. The two are inextricably intertwined.