Conflict is what poker’s all about. This is a central truth of the game that we all deal with every time we sit down to play. We’re trying to beat the other guy, take his money, and knock him out of the tournament. If you don’t want to do these things, you’ll never make it as a successful poker player. But in a broader human context, there is another central truth – that conflict is often dangerous and unpleasant. Conflict carries the potential to hurt, perhaps severely, the person you’re in conflict with. This in itself can be distasteful to a lot of people. But even more distressing, conflict puts you in danger of getting hurt yourself.

And so many of us take refuge in conflict avoidance. This term is generally used to describe behavior in personal and workplace relationships, where people resort to tricks like changing the subject or postponing a difficult conversation rather than risk any kind of an unpleasant dispute. These conflict-allergic people would rather conceal their feelings than take any chance of being disliked or getting hurt. Conflict avoidance is the antithesis of poker, but poker players are not immune to its effects.

Poker is a formalized, ritualized type of conflict, with its own special set of rules. And trash talk aside, it’s a civilized battle for the most part. But poker is also undeniably personal. Few things in life cut more deeply than somebody else taking away your money. Poker may be just a game, but it’s a game that bites. No matter who you are or what you’ve accomplished in life, losing hurts and losing money hurts more. All players know this going into the game, but only a few are truly ready for it.

A hard-core poker player should be ready and willing to bust his own grandmother, to paraphrase the late great Jack Straus. But easier said than done. Even when the folks we’re busting are complete strangers, the experience can be a bit unsettling. It’s only human nature to crave approval, to want to be liked. And as much as we may tell ourselves to be cold and ruthless at the poker table, believing that and putting it into practice are two completely different things.

When we talk about poker conflict, it generally comes down to one of two things: betting and raising. If we have any kind of hand – and sometimes even when we don’t – the usual  response is to fire out chips. Raising an opponent’s blind instead of letting him walk. Raising a limper who just wants to see a cheap flop with a marginal hand. Making a large bet on the flop so that a drawing hand won’t be getting the odds to call. Raising enough to put an opponent all in, forcing him to risk his tournament life. Bluffing - every time a player shoves his chips into the middle of the table, he is telling his opponents: If you want to continue in this hand, you must pay. It’s not a particularly friendly message.

All these plays and more are the bread and butter of a winning poker player. But even in the intense competitive environment of a poker game, we are not free from the desire to be liked, or at least, the desire not to be hated. Aversion to conflict is a natural human instinct – and under the right circumstances, a very effective survival mechanism — and we’re not going to abandon that instinct just because we happen to be sitting at a poker table. Aside from the reluctance to inflict harm upon others (and not everybody shares this “handicap”) and the desire to be liked (ditto), conflict inevitably puts you in a situation where you could get hurt. And that’s one aversion we all share. We can’t fire out chips without putting ourselves into the line of fire.

Because of this, the impulse to bet or raise – to initiate a conflict, as it were – can get co-opted by the impulse to stay out of danger and evade confrontation. So we engage in conflict avoidance, poker-style. We can “change the subject” in a number of ways. Instead of raising preflop with a pair of aces, we can convince ourselves that it’s better to be deceptive and camouflage our aces by not raising. In the same vein, we can convinced ourselves that it’s better to check the flop with a strong hand, or merely call an opponent’s bet, again using deception as the rationalization – when the real reason our chips remain snug in their stacks instead of getting pushed out to the middle of the table is our fear of getting raised or checkraised. Or perhaps we convince ourselves that a bluff wouldn’t work when in fact the conditions are perfect for a bluff.

This is not to say there aren’t times when discretion is the better part of valor. Sometimes it’s good to be deceptive and just call with aces preflop or check-call a strong hand after the flop. Of course. But be clear with yourself about why you’re making the play. Is it truly for strategic reasons, or has conflict avoidance temporarily paralyzed your trigger finger?

We can also “put off the difficult conversation” by postponing the bet or raise to a later time. It’s one thing to do this for strategic reasons, say, if you’re floating, or if you want to wait until the betting limits double on the turn. But if you’re putting it off just for the sake of putting it off – I know I should raise preflop with A-K but I don’t want to, so I’ll just call now and I’ll raise with it next time – that’s another story.

This is how bad plays happen to good poker players. The mind says push, but the heart shies away from confrontation. Poker is a game of aggression. This is especially true of hold’em. If you don’t want to be aggressive, you shouldn’t play – or at least you shouldn’t expect to win. Conflict is dangerous and evading danger has its place, in poker and in everything else. But unfortunately it’s not always easy to determine when it’s time to fight or when it’s time for flight.

Conflict avoidance encourages you to err on the side of flight. Every time you fail to bet or raise with the best hand, you are costing yourself money in the form of smaller pots won, not to mention giving the other players in the hand a free or cheap chance to outdraw you. The real problem with conflict avoidance is that no conflict can ever be deflected or postponed indefinitely; sooner or later there is a price to be paid. In poker, that price is literal and steep.

One Response to “Poker and the Flight Club – Conflict Avoidance” 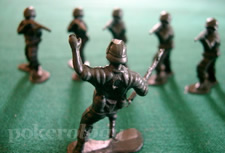