Poker and the Mendacity of Hope

He that lives upon hope will die fasting – Ben Franklin

I can take the despair. It’s the hope I can’t stand – John Cleese, in the film ‘Clockwise’

We’ve always been taught that hope is a good thing. It gives us something to cling to, something to believe in, during those times when life dumps all over us. It helps us to persevere when the future looks bleak. Without hope, our ancient ancestors would never have ventured out of their caves, the American Revolution would have died in its infancy, and nobody would recover from a fatal diagnosis. History is overflowing with great achievements that never could have taken place without hope. But that’s in the real world. In the poker world, hope is an entirely different kind of animal. For the poker player, hope is the enemy. Persevering in the face of long odds may be a great approach when it comes to starting up a new business or recovering from cancer – but it usually spells disaster in a poker game.

What’s remarkable is just how often poker players – even smart, skilled poker players – will make important decisions based upon hope rather than reality. When they play in stakes that are too high or against opposition that is too tough, when they make unrealistic bluffs or chase ridiculously long draws, hopeful players are acting on emotion, not on cold hard facts. Players who do this have convinced themselves that what they want to be true will be true, and hope is their all-purpose excuse.

We all know that reality can bite. It’s no fun to think, “I’m not that good of a player yet” or “My draw is a longshot so I need to fold” – even when we know deep down that these statements are true. It’s human nature to want to feel good, to feel hopeful about the future. And we live in a society that encourages us to do whatever, buy whatever, eat and drink whatever it takes to feel good all the time. At its best, hope can spur us on to achieve great things that once seemed impossible. But at its worst, hope is just another anesthetic we use to dull the pain. Like eating a pint of Ben & Jerry’s whenever we’re feeling depressed, fantasizing about unrealistic hopes can provide a temporary respite from the bleak reality. But it’s empty calories.

There’s no question that in day-to-day life, the ray of light that hope provides can be invaluable – even life-saving. Just not at the poker table. Hope is not substance, and the hard world of poker demands a substantial approach. Put another way, when you play serious poker for money that you care about, you are entering a realm of random luck and real danger. To navigate through this treacherous territory, you must be able to see the landscape clearly every step of the way. Hope clouds your vision. It entices you to see things that just aren’t there – such as the card you need spiking on the river when the odds are really 45-to-1 against, or when hitting your card is likely to give you an expensive second-best hand. And that’s why hope is so noxious in poker. It’s much more difficult to spot the landmines scattered around your feet when your attention is distracted by the image of a castle in the sky.

Of all the many ways that hope can harm you at the poker table, calling too much is the worst and most costly, just because it happens so frequently. Everybody does it, from the lowliest fish to the loftiest pros – the fish just do it a lot more often. As poker players, we are conditioned to think in terms of the cards that will help us, whether it’s an ace to make top pair, running spades to make a flush, a ten to fill a straight, or whatever. We don’t give a lot of thought to all those cards that won’t help us – the rags and the bricks and the cards that will improve our opponents. Of course not. But focusing all that mental energy on the cards we want to see conditions us to hope.

Once we start hoping, it’s just a small step from hope to over-estimating the chances of hitting a draw. And from there, it’s just a gentle nudge to making a loose call. Even one bad call can flip a winning session over to a losing one. But loose calls tend to travel in bunches, and when one loose call shows up it’s almost a guarantee that more will follow. When a player uses hope to rationalize a series of loose calls, he abandons any real chance of walking away from the table a winner.

This is not to say you should never chase a longshot draw. Of course there are times when chasing is warranted, mainly when the pot is large enough or the implied odds are great enough. But there’s a massive difference between putting your money in as an underdog based on logical reasoning, and doing it based on a hopeful feeling. It’s the difference between taking a calculated risk and being rash.

Hope can conjure up a whole host of expensive poker mirages. Hope can lead you to see a weak, bluffable opponent when in fact the player sitting across the table from you is a killer who sees right through you. Hope can entice you to believe that your skill is greater than it really is, that your emotional control is stronger than it really is, that your bankroll is safer than it really is. Hope can persuade you to play in high-stakes games that are way over your head. And every time you stay in a game that you really should quit, convinced you’re still playing your A-game when in fact you’re tilting like a drunk in a hurricane, hope is the culprit.

In poker, every time we act on hope – the hope of spiking a longshot card, the hope that an opponent is weaker than he seems – we put ourselves in the position is needing to get lucky. And that’s a terrible place to be. We have names for those players who need to get lucky to win: fish, suckers, live ones, turkeys – and this is not a club you want to join. So remember, where poker is concerned, hope is just another four-letter word.

3 Responses to “Poker and the Mendacity of Hope” 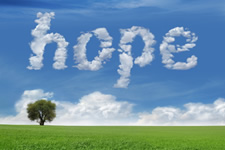 There's a massive difference between putting your money in as an underdog based on logical reasoning, and doing it based on a hopeful feeling.