I was playing in a $1,000 maximum buy-in, $2-$5 no-limit game recently, when a new player sat down two seats to my right and bought in for $1,000. On the third hand he played, he checked when the turn card was dealt and his lone opponent, a guy seated to my immediate right and the new player’s immediate left, made a smallish wager. The new player thought for just the briefest of moments before saying, “all-in.” To his surprise and dismay, he was beaten to the pot by his opponent who said, “I call,” and then added, “I’m pretty sure I’ve got you covered; I have about $1,300 here.”

The new guy looked like he’d been shot. He bolted upright in his seat and then said, “I never saw his stack of hundreds. I thought he only had about two-and-a-half stacks of reds ($5 chips).” His opponent said that his black, hundred-dollar chips were in plain view, unobstructed and unhidden, and that his opponent now had to call for the rest of his thousand-dollar buy-in or fold. After hemming and hawing, he called, showed down two pair that failed to improve when the river card was dealt, and lost to the nut flush his opponent made on the turn.

The new player was unhappy and couldn’t let it go. “Why didn’t you tell me how much he had in front of him?” he said to the dealer, who responded by saying, “You never asked me. It’s not my job to count each player’s stack every time there’s a bet. But any time a player asks me to tell him how much a player has in front of him, I will gladly do that.” A floor supervisor was finally called to the now-escalating fray, and he supported the dealer’s explanation. Only then did the losing player seem to exhale (all the argument taken out of him) – and then he bought in again for another thousand dollars.

I didn’t say a word during the discussion. I didn’t need to. The dealer and floor supervisor had all the facts at hand, had the situation it under control, and made the right decision too. My take on the situation was that the new poker player didn’t take the time to scope out the table and was really unaware of how approximately how many chips each player had in front of him, and in his haste to bet his two pair – thinking that when he said “all-in” the most he could lose was somewhere in the neighborhood of $250 – he acted before gathering all the necessary facts and thinking things out clearly.

Had he said to his opponent, “How much do you have in front of you?” before making his wager, he would have had an opportunity to size his bet based not only on the inherent strength of his own hand, but he could have factored stack size into the betting equation too. He probably would have lost less in the process. If he bet about $250 and his opponent – who was sitting there with his newly-minted nut flush – then pushed all in, he could have folded and saved himself $700 if he thought his only chance of winning was that slim 8.7 percent chance of improving from two pair to a full house on the river.

The outcome of the hand is not important here. What matters is that the guy who misread – or more likely, really never even took a good look – at his opponent’s stack size, committed a very basic error. He didn’t look before he leaped. So eager was he to play his own hand for its intrinsic merit, he never considered what his opponent might be holding, nor did he account for the number of chips in his stack.

I’m just guessing, but I suspect that if this same opponent had been at the table for 15 minutes or longer when this confrontation happened, the results would have been quite different. The new player probably would have acclimated himself to the table, not jumped in with both barrels blazing, and taken the time so size up his opposition and have some rough idea of each opponent’s chip count.

Poker is unique among sports in that it has no warm-up period. Every other athletic endeavor has its own pre-game rituals of getting ready to play. But poker players don’t get dealt a few practice hands when they first sit down; they have to pony up real money and play it for all it’s worth.

Poker pro Barry Tanenbaum has said on more than one occasion that he likes to win the very first hand he plays. There are lots of reasons for this, but one of the more subtle ones is that it forces you to take a look around, scope out your opponents, and have a pretty clear idea of how your hand stacks up to your opponent before you commit an entire buy-in to it, even if that commitment is less than enthusiastic and made almost inadvertently. 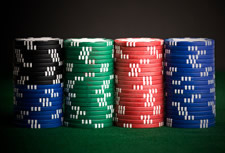 The guy who misread - or more likely, really never even took a good look - at his opponent’s stack size, committed a very basic error.