Opportunity Costs at the Poker Table

In the study of behavioral finance there’s a concept known as opportunity cost. The official definition goes something like this: It’s the value of the option that you must give up when choosing between two mutually-exclusive alternatives. It’s the price of the road not taken. If you buy a stock, the opportunity cost is the profit that could have been made if you had invested that money in something else. If you sell a stock, your opportunity cost is the chance to sell that stock at a higher price later on. Virtually every decision you make in every walk of life carries some kind of opportunity cost, and nowhere is this more true than in a poker game.

From the moment you sit down to play poker you are faced with an series of decisions to make; some of these decisions are difficult and some are so easy you could practically make them in your sleep, but every one of them has an opportunity cost. Starting with your decision to play at all. The time you devote to playing poker could be spent doing something else, such as putting in more hours at your job where you might have earned more money than you make at poker. Or the time could be spent acquiring new knowledge and skills that could pay off in a big way later, career-wise and finance-wise.

But opportunity costs are not merely gauged in terms of dollars and cents. The time you spend in a card room or staring at virtual poker tables on a computer screen is time that you could have spent with your family and friends. That also represent a kind of opportunity cost. Alternatively, if you should decide to quit playing poker in favor of focusing more on your job or spending more time with your family, the opportunity cost then becomes the enjoyment and mental stimulation you would have gotten from poker, and – if you’re really skilled at poker – the money you would have earned.

Opportunity costs are typically related to future outcomes, which of course can never be fully known – if they weren’t, the choice would always be easy. Because of this, and because opportunity costs take into account such things as personal enjoyment and fulfillment, they are virtually impossible to calculate with any real precision. Nevertheless, opportunity costs are a very real and important factor to consider whenever you’re faced with a difficult choice. And few things in this world will present you with a greater quantity and quality of challenging decisions as playing in a game of poker.

When you fold, opportunity cost becomes a factor if it turns out that you would have won had you called. Which is not to say you should play results-oriented poker. Far from it. But if you’re one of those poker players who kicks himself for not being psychic and knowing when the flop/turn/river would have hit your hand, that becomes an opportunity cost of folding. Or in any important poker decision for that matter – if making what turns out to be the “wrong” choice is going to tilt you, that’s a kind of opportunity cost as well.

The tougher the decision you face, the more important it becomes to consider the opportunity cost. For example, you’re playing in a NL tournament, let’s say a sit-n-go. Four players left, on the bubble, and you’re third in chips. Your remaining opponents are all reasonably solid players. Preflop, you’re in the big blind with A-K offsuit; UTG folds, then the next player, the short stack, raises (not enough that he’s pot-committed), and the button responds by shoving all in. You’re convinced the short stack will fold if you make the call, but he might call for all his chips if you get out of the way. The button is an aggressive player and you really don’t think he has aces or kings, which means you’re probably either racing or have him dominated if you call.

Say you fold, hoping that the button will take out the short stack, thus putting you into the money. Here, your opportunity cost is the chance to double up (plus the dead chips from the short stack) at a critical point in the tourney, which would allow you to virtually coast into the money and have a much better shot at winning the whole thing. On the other hand, if you call and the short stack does indeed fold, your opportunity cost is the chance to have one of your opponents get eliminated right now, ensuring that you’ll make a profit on this tournament.

Obviously there are other variables here that will influence your decision. Is your main priority to squeak into the money or win the whole tournament? Do you believe the short stack holds an ace or a king, thus taking away one of your outs? And then there are the fine points of the situation, precise playing styles, stack sizes, etc.

The concept of opportunity costs can be enormously beneficial for poker players because it encourages us to really think through the value of each option as we ponder all those thorny decisions that await us at the poker table. Whether to play a strong hand fast or go for the slowplay. Whether to bluff-raise now or float until the next round. Whether to call all in for your tournament life or fold and wait for a better spot. Because the true cost of any choice lies in what you had to give up to make it.

One Response to “Opportunity Costs at the Poker Table” 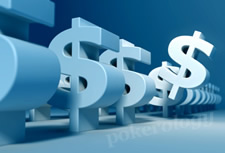 The tougher the decision you face, the more important it becomes to consider the opportunity cost.