You walk into a live poker room for the first time, carrying your racks of red chips to your assigned seat at the $2/$5 no-limit hold’em table. You sit down and look around at some of your opponents:

From such visual descriptions, you may believe that you can determine each player’s habits, tendencies and betting patterns simply by their appearances. What you don’t see are the invisible placards that hang around their necks, telling you exactly how well they can play the game.

How can you see these warning signs in a live poker game? In reality, you can’t. However, you can find out so much more about a player’s history and tactics when they play poker online. The techniques, tools and tricks used to compile, sort and organize such massive amounts of data are collectively known as “data mining”.

According to Wikipedia, data mining is “the process of extracting hidden patterns from data”. For example, when you visit Amazon.com to buy a new poker book, the site recommends other books based on selections made by customers who have previously purchased that book. In other words, they have “mined” the data compiled from previous purchases to make recommendations. With millions of customers worldwide and billions of hands dealt every year, the reservoir of available online poker data is obviously immense.

If a player could harness the tools to “extract (the) hidden patterns” of their own playing habits, they could learn how to plug the leaks in their own game and make themselves a strong force at the table. If they could do the same to their opponents’ tendencies, it could bring them the ability to predict their adversaries’ moves before they made them. For instance, if you knew your opponent would fold to a check-raise on the flop, almost regardless of cards they held, you could check-raise them on the flop all day long and never have to showdown a bad hand. The targeted application of such patterns can lead to what could appear to be an anticipation of an opponents’ moves bordering or clairvoyance.

Several software packages exist that can distill and refine the loads of data and categorize each player at a table. Some sites enable players to look up “scouting reports” on individual opponents and rate their playing style from “fish” to “maniac” or “bomb” to “calling station”. Others track an adversary’s tournament history (either sit-n-go or multi-table) and chart whether they’ve been on a hot winning streak or a downhill slide. Many packages feature a HUD (Heads-Up Display) that the software superimposes over the virtual table. In addition to the player’s name and stack size, the HUD also shows several major statistics and an icon representing the player “type”. Still others break down tendencies (such as the percentage of times an opponent will three-bet on any street, how often they fold after an attempt to steal the blinds, and how frequently they made a “donk bet” on the turn or river) to such a granular level that only a statistician could appreciate.

Such astute statistical analysis was one of the keys in cracking the “superuser” cheating scandals at both Absolute Poker and Ultimate Bet (part of the Cereus poker network). When data miners found a single outlying point on a cluster graph of player wins and losses over time, they found that certain players won far more often than the laws of probability could reasonably take into account. Later investigations uncovered that players on those sites had “superuser” access, which enabled them to view all of their opponents’ hole cards during play. These users were subsequently banned from their respective sites and the site owners are said to have closed the programming loopholes and refunded losses to the victims of the scheme (editor note: these two rooms won’t be promoted by Pokerology.com – we cannot recommend them!).

Although most data mining software packages compile their data from hands where you’ve participated, certain programs simply observe hands at other tables and gather hand history data. These programs are known as “handgrabbers”. The live analog would be an observer from the rail who could not only watch the action on each hand, but also knew the hole cards for each player. Such data would be useful for players “spying” on a table they wanted to join to ascertain the level of skill of his prospective opponents. Many of the major online poker sites are taking steps to prevent players from using any kind of handgrabbing software, since they consider such operations unethical. In November, Poker Stars banned the use of SharkScope and other data mining software for use at their games. Full Tilt does have its own policies with regard to handgrabbing and the use of outside data sources, as they regard them as a form of cheating and theft:

Many sites have taken these measures due to player complaints. Some poker players argue that such exhaustive data analysis tools give their users and unfair advantage – with some suggesting that online data mining is cheating. Other observers have noted that, if all the “sharks” converge on tables and tournaments full of “fish”, then they’ll chase away the very “fish” they need to sustain their bankrolls. Another idea is that the game itself could degrade from a battle of wits, courage and luck to a contest between software tools; the human element would become irrelevant and each player would make their decisions based on reciting statistics rather than reading opponents.

The best player to use these tools on is the one you see in the mirror. If you learn that you’ve been playing too tight and folding too much, get more aggressive and play back at them. If you’ve been too loose and raised too much, tighten up your pre-flop selections and bet for value. Whatever your style of poker, the best way to combat players using data mining tactics against you is to make their data obsolete. The pros call it “changing gears” or “mixing it up”; not only does it apply in different stages of cash games or tournaments, it should also apply as you progress in your poker career. 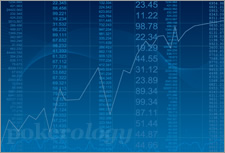 The game itself could degrade from a battle of wits, courage and luck to a contest between software tools.