Many online poker players, both pro and amateur, enjoy playing at multiple tables at the same time. Some pros have reportedly played on as many as twenty tables simultaneously during some online sessions. However, multi-tabling may not be for everyone. A special set of advantages and setbacks come with playing several tables at once.

The Advantages of Multi-tabling

Let’s start with the positive of multi-tabling.

If you like action, then you’ll enjoy playing multiple tables. If an average online no-limit hold’em table deals sixty hands an hour and a player plays six tables simultaneously, then that player would see three hundred and sixty hands per hour, or one hand every ten seconds. If ten seconds is just too long for you to wait for a hand, you can take on more tables to see more hands.

Mike Caro is famous for saying that the object of poker is not to make money or win pots, but to make good decisions. Often, the most crucial decision in comes in whether or not to see a flop. When a player makes smart decisions in those situations, the benefits in both experience and winnings can increase exponentially.

If a poker player keeps accurate records on their results, then they will often notice big swings between winning and losing sessions when they play no-limit hold’em cash games. One day, a player can hit his draws, his opponents fold to his raises and he takes down huge pots. The next day, he has a million outs on the river and misses them all, two of his tablemates get into a raising war and squeeze him out of pots, or no one folds to his brilliant bluffs. At multiple tables, a player can encounter both of these situations at the same time, as well as other possibilities along the spectrum. Online multi-tabling can take much of the variance out of poker. While he may not win as much during a multi-table session as he would at a single soft table, he also won’t lose as much when times are tough.

The Setbacks of Multi-tabling

Unfortunately, online multi-tabling is not an easy road to riches. Many snares, traps and pitfalls await you at the tables. These issues are magnified when a player tries to play so many games at the same time.

If a player is used to playing $2/$4 no-limit on a single table and has recorded strong, consistent results, logic would dictate that he could play the same game at multiple tables. If he’s crushing the game when he plays one table, he should be that much better when playing multiple tables, right?

Not necessarily. When playing multiple tables, the best way to take advantage of the lower variance is to play at lower limits. Also, if the player has such a remarkable skill advantage at the $2/$4 level, he should dominate the supposedly weaker players at the $.25/$.50 level when playing up to eight tables at once. The player can accomplish the same results in less time without placing undue strain on his bankroll.

If a player is ambitious enough to try to multi-table bigger games, then he has to be sure that his bankroll can handle the swings. While the long term variance is lower when multi-tabling, poker players can still see huge swings within a session. Players should always be sure that their bankroll is sufficient to cover multiple buy-ins per table.

Another consequence of seeing more poker hands is seeing more bad beats. While the probability of seeing a bad beat stays the same, the sheer number of hands makes seeing a strong hand go up in smoke when a “donkey” hits a lucky card practically inevitable. For instance, if a player sees a thousand hands where his opponent has only one out at the river, the “donkey” will hit his one out an average of twenty times out of that thousand. Players should remember that the only time a hand ‘deserves’ to win is when it wins the showdown. Until then, he’s just playing the odds.

When a player takes that bad beat, can he recover his composure in ten seconds? How about five seconds? Faster than that? If he can’t, then he’ll carry over that “tilt factor” to another hand at another table. If he was dominating that table before and allows his emotions to color his decisions, then he may lose the stack he spent so much time and effort building.

If good poker play and smart decisions can multiply a player’s winnings, then emotional play and tilt-based decisions will multiply his losses even faster. Bad beats turn into bad decisions, which turn into bad play and bad results. The effect can lead to a catastrophic chain reaction where the player will chase losses, bet on draws on suffer a huge hit to his bankroll.

Before you decide to fill your monitor with as many tables as it will fit, remember that online multi-tabling requires smart bankroll management, good decisions, and emotional control. In other words, it takes all of the skills required of great poker players – multiplied! 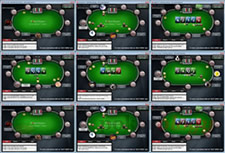 Online multi-tabling is not an easy road to riches. Many snares, traps and pitfalls await you at the tables.