On the Short Stack

Regardless of whether you’re playing in a poker tournament or a cash game, it’s seldom fun to play on a short stack, although it’s easier out in a cash game because you can always reach into your wallet and buy more chips. Most players prefer a big stack rather than a short one and play better when they have a boatload of ammunition, although some no-limit players deliberately buy into cash games for the table minimum. They do this to avoid having to decide whether to play for of their chips, because playing for a large amount of chips represents a sizeable risk every time they play a hand.

One of the reasons some casinos spread no-limit cash games with a capped buy-in is to mitigate the downside of a player being drawn out for his entire bankroll.

Playing with a short stack also makes some otherwise tough decisions no-brainers. When you’re short-stacked in a cash game it’s no longer a tough decision if you’ve flopped top pair with top kicker and are facing a raise. With a big stack and a pocket pair of aces, or even two pair, deciding whether to call a big raise is a much tougher decision simply because you can lose a lot more. But with a short stack, you can call and reload if you lose.

Playing in a cash game with a cap on the buy-in falls somewhere between playing real no-limit – where everyone is deep stacked and a confrontation for all or most of your chips is always a possibility – and a spread-limit game. Although a wide betting range can hurt you even when you are playing a short stack, it’s not likely to be a mortal wound.

But it’s a different story entirely in a poker tournament. That short little stack represents your entire tournament equity, and it means you’re in jeopardy. Now you have two tasks at hand: You have to protect your chips while simultaneously rebuilding your arsenal.

Protecting chips usually means caution and conservative play, while stack-building suggests an aggressive posture that leans heavily on taking every possible edge to maximize your ability to acquire chips.

Nevertheless, you still need to aggress to grow your stacks. When you raise with a short stack, it’s tantamount to risking all your chips in a defensive raising posture, not an offensive thrust. When you’re near the back end of the betting order with A9 and no one else has entered the pot, that’s the time to raise – and hope you’re not called. Your defensive raise is aimed at winning the blinds and antes so you can fight another day.

An accurate assessment of your opponents is your best friend here. Will they fold or call? If opponents on your immediate left are short stacked too, they figure to fold more often than not. But the chip leader might make a $20,000 call with any playable hand, especially if it’s small potatoes to him.

Do your opponents include anyone about to make a last stand with any two cards? A desperate, down-to-the-felt opponent will probably call with any two cards. But if your opponents are not on tilt and playing well and view you as a patient poker player who is likely to have a good hand when he finally raises, they might be willing to let you escape with the blinds and antes.

Regardless of how opponents see you, you just can’t wait around for premium pocket pairs before making your move. With AK or AQ and a short stack, it’s time to put your tournament life on the line by raising all-in. It’s not such a bad deal even if you’re called. If you win, you’ll have $40,000 in front of you, and one more double-up after will put you right back in the hunt, along with the maneuvering room you wish you had right now.

The key to short-stacked play is to be the aggressor. You can’t call your way back into contention. When you call, you can only win by showing the best hand at the end. Not only that, you lack fold equity – the possibility that your raise will cause other opponent to fold, thereby winning you the pot.

With a really low stack you just have to pick a hand and make a stand. When it’s very short, you can count on being called by the big blind and perhaps one other player. In that situation, you’re better off going all-in with suited connectors like 98 than a hand like K8 or Q7 because the most likely hands to call will be two high-card hands, and you run the risk of being dominated to only three outs.

The numbers prove the point. A single overcard is a 52 percent favorite against two suited connectors, and two overcards are a 58 percent favorite. But if your hand is dominated, you have less than a 30 percent chance of winning.

Here’s the key point: Two suited connectors are usually both live cards, and that’s a lot better than being dominated to three outs.

When you’re short stacked you don’t have the opportunity to wait for big hands. You must make a stand sooner or later, and once you’re holding the right kind of hand and the situation is right, just push your remaining chips across the betting line and hope for the best.

Desperate times demand desperate measures. But if you’re lucky enough to propel yourself back into the poker tournament, you’ll have another opportunity to let your skill do the talking instead of your luck. 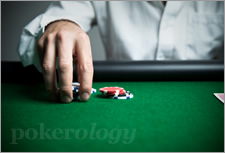 Now you have two tasks at hand; you have to protect your chips while simultaneously rebuilding your arsenal.