No Limits on Limit Hold’em

Way back in poker’s dark ages (the years prior to 2003, before Chris Moneymaker won the World Series of Poker’s main event after gaining entry via a $40 online satellite) no-limit hold’em was a game played during tournaments in brick-and-mortar casinos by experienced cardsmiths who honed their game over years of play. But once TV caught up with the democratization of poker courtesy of very inexpensive satellite tournaments available everywhere online, everyone who fancied him or herself a poker player – new and old alike – wanted to compete like the pros they saw on the small screen, and no-limit hold’em replaced fixed-limit hold’em as the game of choice.

This led to a veritable feast of knowledge and information about the game in all its varied iterations – tournaments, cash games, sit ‘n’ go tourneys, six-handed games, and even micro-limit games. You name it; someone wrote a book about it. Books led to online poker teaching sites, and a plethora of poker “boot camps” held in casinos – usually in conjunction with a major tournament series – all across the world.

The result was that everyone was playing no-limit hold’em, and with all of the learning opportunities that were available for the taking and the ability to play thousands of hands and hundreds of tournaments in a shorter time period online that one could ever imagine playing in a brick-and-mortar casino, skill levels increased rapidly and dramatically.

But while everyone was becoming pretty adept at no-limit hold’em, most folks weren’t paying much attention to other forms of poker. While the average skill level in no-limit hold’em was rising every year, most of us still played all of the other games just about the way we did years ago, which really points to an opportunity to make a score in those games. Trouble is, when you walk into a brick-and-mortar casino, not many other games are spread. A rotation of mixed games can be found occasionally, albeit at stakes higher than many people can afford or are comfortable playing.

And while you can find Omaha and 7-stud/8 games online, many of the players who populate them are strong players, since the overwhelming majority of new players venturing online come there for one thing and one thing only—to play no-limit hold’em.

But in brick-and-mortar casinos, at least in the United States, you can still find a cornucopia of fixed-limit hold’em games, and along with it, a lot of opportunity for savvy players. Moreover, the very nature of the game provides some advantages that you won’t find in no-limit games.

For one, there seems to be a real skill difference between the habitués of traditional casino poker games and those who have played and prospered online. Online poker players tend to be more aggressive, more experienced, more knowledgeable, and more skillful. Online is where many of the new and improved poker strategies were developed, honed, promulgated, and learned – and someone who has no experience playing online is likely to have missed out on much of poker’s information explosion. And while fixed-limit hold’em is a very different game than no-limit hold’em, a good no-limit player should be able to adapt to a fixed-limit game in short order.

Another advantage offered by fixed-limit games can be found in its diminished variance. When all of your money is potentially at risk on every hand, one misstep, one lucky draw by an opponent, or one unforeseen and unexpected hand, can really spoil your day and your bankroll too.

But in a fixed-limit game, where the amount of exposure on any one wagering round is limited to a bet and some predefined number of raises, one bad play can still hurt, but it can also be overcome without facing the sort of oblivion that happens when your entire stash is snatched right out from under you.

Every player goes through protracted streaks of good luck and bad, but in no-limit it hurts a lot worse. You needn’t look any further than Isildur1, the enigmatic Swede who, during the period from November through December 2009, won and lost some of the biggest pots ever seen in poker. At one point he was up over $5 million, only to lose $4 million in one disastrous night and go broke a few days later.

He rose and fell like a rocket, and while some of it was undoubtedly attributable to his hyper aggressive playing style, a lot of it was caused by nothing more than the variance anyone can expect to encounter in a no-limit game. And while it’s true that he wouldn’t have won as much if he was playing fixed-limit poker, it’s equally true that he wouldn’t be broke now either.

Mitigating against the extreme variance in no-limit games is the very reason many casinos offer a hybrid game of sorts: no-limit with a cap on the amount of a player’s buy-in. Because there’s a limit on how much a player can buy-in for, it’s less likely that anyone will bust his bankroll on any single hand. The game is different too. It plays somewhat more like a spread-limit game than deep-stacked no-limit poker.

Of course you have to adjust when coming from no-limit to fixed-limit games, but those adjustments aren’t extensive. Starting hands change dramatically, and hands that can build top pair with top kicker are much more playable in fixed-limit hold’em than they are in no-limit. You’ll see hands like KJ played regularly in a fixed-limit game, and a player holding KJ who sees a flop of K-T-4 or J-8-3 is likely to play it through to the river, unless the wagering goes through the roof, or a flush card pops up on the turn and it’s bet and raised before it’s time for top pair, top kicker to act.

While the concept of implied odds are important in fixed-limit hold’em, they are not as important as they are in a no-limit game, which is a game that’s all about implied odds. The lack of a cap on the amount that can be wagered really makes it profitable in the long run to take some thin draws if you believe you can capture an opponent’s entire stack if it pans out.

There are myriad other differences between the two games, but that’s the subject of a different article. The point of this one is to tell you that opportunities abound in fixed-limit cash games in brick-and-mortar casinos and online casinos too. If you feel you’ve run up against no-limit hold’em’s brick wall and the opposition is improving just as rapidly as you are, and it’s all you can do to hold your head above water while hoping to take down a couple of really big pots but fearing a major hit to your bankroll when the variance is running the other way, take solace in the fact that the pickings look pretty good in the fixed-limit patch.

And it’s enjoyable too. After all, you get to play a few more hands, your entire stack is seldom in jeopardy, and your opponents have not been as dedicated, by and large, to upgrading their skills over the past few years as the no-limit crowd has. Give it a try. You might be glad you did. 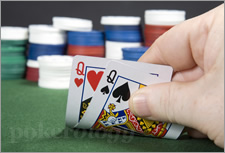 The very nature of the game provides some advantages that you won’t find in no-limit games.