To limp or not to limp, that is the question. I don’t think the Bard was ever faced with this query but if he had it would be interesting to hear his response. There are basically two schools of thought on this subject and we regularly see poker players take both approaches. So which is correct? To limp or not to limp – let’s take a look at both sides of this strategic course of action and maybe reach a conclusion.

Those who like to limp believe they may see some cheap flops when playing marginal hands and hopefully can be lucky enough to connect to a powerhouse hand and take down a big pot by felting another player. If the flop hits them they feel they are in the position to take an opponent’s whole stack. If the flop misses them completely, they can get away from their marginal holding for the price of the big blind. Of course, they may only get a small piece of the flop and if they don’t possess the discipline to get away from their hand it is their stack that becomes vulnerable. A myth associated with early limping is the assumption that you can get to see the flop cheaply – but this potentially savvy poker strategy doesn’t sound like such a bargain when another player puts in a large raise after you limp. You will not have seen the flop and it cost you the size of the big blind. This is why your position and knowledge of the other players’ tendencies is of paramount importance.

Let’s take a look at the flip side of the limping question and those who believe strongly that, when first entering a pot, one must bring it in for a raise. These players believe that their raise will discourage others who may be looking to get in cheaply and then possibly hit the flop. Their mantra is basically “bump it or dump it.” They believe that if your holding is not worthy of a raise it should be deposited in the muck and that limping with marginal hands is just asking for trouble. Both of these approaches seem to have their own merits but many poker players seem to embrace one or the other and never deviate.

So again, which approach is correct? Personally, I believe that there should be room in your poker arsenal for both approaches. Which one is employed at any given time is the real key. As an example, limping in early in tournament play when everyone may be playing ultra cautiously can get you a look at some extra flops that just may connect well with marginal holdings. The main aspect to consider is how the table is playing. It cannot be stressed too many times that you need to focus to your opponents’ tendencies to help guide your actions. If you’re in early position at a tournament table that you’ve assessed to be passive then limping might just hook you up with a monster on the flop. However, if one or more of your table mates is not allowing anyone to see cheap flops then that fact must alter your play because now you have a reasonable expectation that the flop will not be seen for just the price of the big blind. If that is the case, raising first is usually the optimum play. Another aspect of limping early comes into play when you feel certain that one or more of your aggressive opponents behind you will raise. Then limping with quality hands can garner you the opportunity to re-raise.

When I find myself at a table full of what I like to call “Fishermen”, who love limp fests, I enjoy punishing them. If I’m normally planning to enter a pot with a raise three or four times the big blind and the action is on me, after four limpers I will raise seven or eight times the big blind. How I arrive at that is to add one additional bet for each limper, in this case four, to my original
plan to bring it in for three or four times the big blind. You will normally take down a nice pot as the limpers are probably fishing to see a cheap flop with marginal hands and don’t wish to invest another six or seven bets. They will wait for a better spot. In fact, if the table is passive enough you can downright steal with any hand if you make it expensive enough. This tactic needs to be used with some prudence as someone may be limping as a trap and you will step right into it.

Whether or not to limp in no-limit is much like most aspects of poker where you are best advised not to play formula poker and just follow one line of reasoning. A good rule to follow when sorting through poker advice is to be very careful when the advice is preceded by the words never or always. Being a game of incomplete information makes the words never or always incorrect – always! This is why the use of the term “It Depends” is so ubiquitous in the poker literature. Assess your opponents’ tendencies and the texture of the game and you will soon develop a natural feel for whether you should be limping or bringing it in for a raise. Mixing up your play should serve you well as it will help to keep your opponents guessing. Never being predictable is one of the best reasons to limp some of the time and raise other times when entering a pot.

One Response to “No-Limit Limping” 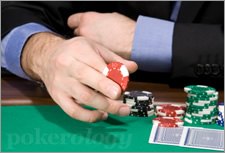 Being a game of incomplete information makes the words never or always incorrect - always!