Women in Poker: A “Honey-Maker” Effect?

When the “Moneymaker effect” took hold of the poker world in 2003, it brought many new players into the game. Youngsters who were playing “Magic: The Gathering” switched to poker and saw their opponents’ chip stacks disappear. Older players who were raised on Seven-Card Stud and Five-Card Draw took up Texas Hold’em and quickly learned how this version of the game became so popular.

While players from all walks of life starting learning, watching and playing no-limit hold’em, one substantial section of the population didn’t join in the stampede: women. Although players like Barbara Enright, Cyndy Violette and Annie Duke had been on the poker tournament circuit for years, very few women chose to spend their free time in cardrooms filled with cigar smoke, cheap booze and testosterone.

However, with the recent success of players like Duke, Annette Obrestad and Vanessa Selbst, the poker media has picked up on the higher profile of women in the game today. Can this increased media coverage lead to a “Moneymaker” (or, as one poker forum poster put it, a “Honey-maker”) effect for female players?

Here are some reasons why more women will get involved in poker:

LIPS and Other Women Only Events

The LIPS (Ladies International Poker Series) is designed to get more women participating in poker tournaments. Instead of the cutthroat environment found at most open events, most participants at tournaments that feature a predominately female field find that they are often much less stressful and more of a communal experience. Such a welcoming atmosphere can help women build their skills, confidence and experience to a level where they can enter open events and compete for the biggest prizes.

Television and Other Media Exposure

One of the factors that may attract more women to the game is also one that has brought in many new male players: TV exposure. With Annie Duke on “Celebrity Apprentice”, Tiffany Michelle and Mario Ho on “The Amazing Race” and Vanessa Rousso in Sports Illustrated, female poker players are getting more mainstream media attention and becoming celebrities in their own right.

Many women who are new to the game may find the “old boys club” atmosphere of live poker to be uncomfortable, distracting, or even intimidating. Online poker offers women the chance to learn the game in a safe, comfortable setting without worrying about enduring unwelcome advances or unsavory leers. A female player may even choose to have a male avatar represent them at the tables as a way to throw the boys off their game.

In competitive sports that require strength, speed and power, even world-class female athletes are at a distinct disadvantage to their male counterparts. Poker is a game that removes all of the physical inequities and replaces them with focus, skill and timing. Women with these traits can easily overpower men at the tables, especially those who hate losing to a “girl”.

The success of Annette Obrestad, Vanessa Selbst and other young female players could help to bring about the same youth movement that has been growing among male players since 2003. If more young women can see that they can succeed at poker just as much as their brothers, boyfriends or husbands, they may add some championship bracelets to their jewelry boxes.

However, some factors can also contribute to a lack of new female players getting into the game. Here are some reasons why more women will not get involved in poker:

The economic decline has forced tournament fields to shrink across the globe. Since salaries for females in the work force are typically 50-60% of those of their male counterparts, women often have less discretionary income to invest in a poker bankroll. New female players may prefer to save their money rather than risk what they have at the tables.

It’s the Law, Even More Stupid

The impending enactment of the US Unlawful Internet Gambling Enforcement Act (UIGEA) has closed off many online poker sites from the lucrative American market. The shrinking pool of online poker sites available to Americans will limit the number of new American women players coming into the game. Women who are serious about learning poker will be limited to the options of traveling to a cardroom, playing in a local home game, or hosting their own game.

In 1989, the US Federal Reserve conducted a survey that found that women are much more risk-averse in their investment choices than men. No one can argue that poker, especially no-limit Texas hold’em, is a risky investment. Players in cash games experience big swings in their bankrolls, while tournament specialists can go for months (or even years) before they see a big cash payday. Women who are traditionally risk-averse will not take a huge “gamble” on a career in poker.

Although events such as LIPS and other “women-only” events are bringing female players into the game, the fields at open events are still dominated by men. At last year’s WSOP Main Event, female players made up only ten percent of the field, an average of one woman per table. With so much money and fame on the line at major events, the pressure of being the only woman at the table may be more than a new player can stand.

Women who earn the titles of “First Female Astronaut”, “First Female Billionaire” and “First Female President” earn a spot in the history books. A woman who earns the title “First Female WSOP Main Event Champion” will only receive that level of attention in the insular poker world. While Barbara Enright, Annie Duke and Jennifer Harman will all merit places in the history of poker, they may not get the respect they deserve outside the game – just ask Joan Rivers:.

Is the increased success and attention for female players a welcome trend or an unexpected fluke? The growing trend suggests that the top players will continue to bring home major tournament titles and large cash prizes. Does their success bode well for more women at the poker tables? No one can say for sure, but inevitably a woman will come along and tell the “old boys” at the table, “Any hand you can play, I can play better. I can play any hand better than you.”

One Response to “Women in Poker: A “Honey-Maker” Effect?” 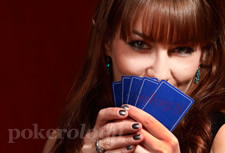