How to Liven Things Up at the Poker Table

You’ve been looking forward to playing poker for at least a week now. You finally made the trip to the nearest poker room. There’s a seat in one of the games. You eagerly take it. You buy in for a couple of hundred dollars as you get ready for your big casino poker experience.

You post your $2 blind. Everyone folds to the small blind who looks at you and says, “Chop?” You agree and pull back your $2.

There’s not a smile among them, your opponents at the table. Seven guys and two women and they all look like they’ve been playing for hours – and aren’t too pleased about it. Glum city. You post your small blind. Two players call the big blind. You look down and see JJ. You raise to $10. Everyone folds. One guy looks over at you stone faced as he folds. Not a blink, not a nod, nary a twitch. Having fun?

Read what you want about all of the great, loose, fun-filled, action-packed poker games in casinos these days. But often, I find, the scene resembles the one above. Is there anything you can do? Fortunately, there is. Let me give you three things that you can do at the table that can turn stone mountain into a fun poker game.

First of all, just because people seem glum or somber doesn’t mean that they are naturally rocks, serious poker players, or even particularly serious people. Sometimes, games devolve into boring, serious affairs – even if the people playing them prefer them to be fun. Folks get tired. For many, somber-glum is their mental default. If nothing is making them laugh or getting them engaged then this is their set position that they return to.

Say something to wake them up. You don’t need to follow a specific script. Even so, if you’re not generally good at this sort of thing, here are some possible expressions you can use.

“Damn, you’re all so serious” works for me – provided I smile or laugh to let them know I’m saying it light heartedly. Similarly, I might ask, with a smile “did someone die”? or “Where’s the dead body?” If you want to be a little less intrusive you can simply say, with a smile, “Hello! Nice to see so many smiling faces!”

If no one punches you out, chances are they’ll smart and maybe even laugh. And that’s what you want.

Once you’ve broken the ice, there are a million things you can say to keep things light. The most important is for you to stay light, happy, and generally positive about the experience. Be sure not to whine about losing or gloat about winning. And of course, under no circumstances do anything that might seem to be commenting negatively on their play. Don’t, for example, say “nice catch” if they hit the river and draw out on you. Don’t say, “how could you play that?” Don’t say, “damn, that’s the 50th hand I’ve had to fold in a row” — unless you’re being sarcastic or ironic.

You don’t have to be a comedian, but if you make jokes, make them about yourself. Maybe you can point out your own foibles – when you make them – or just exaggerate your own weakness by drawing attention to them with humor. The key is to say things meant to make light of the game and your own play – never to mock or ridicule others.

Livening up the poker game isn’t just about talk. You can also do things that often help to liven things up. Some of these are poker related. You may know them already. You can straddle (putting double the big blind when you are to his immediate left). Sure, it’s a negative move in the long run. But your purposes aren’t strictly strategic. You want to help foster a loose and somewhat frivolous image if you can. A straddle may do that. Similarly, you can blind raise from any position. This too is a move with negative expectations as far as the hand is concerned. It’s surely better to look at ones cards before raising. But the move often gets others to behave more aggressively and wildly. Similarly, calling on the button in the dark pre-flop if the pot hasn’t been raised – announcing you will do this when the cards are dealt – is also a bad move that may stimulate betting action.

In general, you can raise and reraise with hands that have only drawing potential – instead of just calling with them. This raising will tend to agitate some and excite others. In both case you’ll be likely to stir the pot and instigate more aggressive play from your opponents in general. You can also show players your hands when they fold – or show them just one card. Let them see that you play sub-optimum cards. Let them see especially when you have made a successful bluff. Don’t show them to rub it in but to show them how lightly you take the game. Remember though, as you are doing it, that you want to appear easy and carefree about it – frivolous and capricious. If you do so in a somber or overly aggressive way you may have the exact opposite effect on the game from the one you want.

Finally, there are non-poker actions you can take to juice things up a bit. Of course, if this were a home game you’d make sure to have plenty of alcohol available. Nothing works better than alcohol to get folks to become carefree and easygoing. But this being a casino you really can’t bring your own bottle. You can, however, drink yourself – at least so you’re noticed. You don’t have to have a lot of alcohol. You surely don’t want to diminish your own level of play in the interest of lightening up others. But you can order a drink so others notice – and then get another each time you see the waitress. You don’t have to drink much to get a fresh drink. But just the process of ordering alcohol can serve to loosen up the rockiest of poker players.

It’s not just ordering alcohol that can help. You can initiate games at the table – or engage in side bets about other things going on around you. I found that poker players loosened up in a recent rock-fest when I made prop bets about the basketball game. I bet on the game not being tied, on which time would score next, and then on who would commit the next foul. I didn’t care at all about the result or about the game. But by introducing some clearly frivolous betting into my action I was engaging their gambling interests. That translated into more gambling and less serious play at the table.

With all of this, you need to stay loose and friendly at the table. Make sure to smile and make jokes about yourself. You have to be careful not to overdue it. Very talkative players can be very annoying and get others to grow grim and angry as a result. You don’t want to do that. So make your jokes and comments sparingly.

The key to all of this is for you to smile, be friendly, and seem at least somewhat frivolous with your approach to betting. Sure, this may not help you extract every last bit of profit from every hand. But the looseness you create at the poker table will generally make all of these distractions worthwhile. 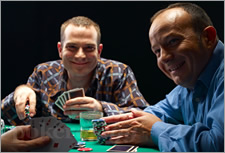 Remember though, as you are doing it, that you want to appear easy and carefree about it – frivolous and capricious.