The poker game of choice these days is surely no limit hold’em. Many people playing today know no other form of the game. For them, poker is hold’em.

That being said, there are other poker games out there. If you only know poker from television, your friends, and bar leagues, this may be news to you. But if you play poker online or visit public poker rooms, or are over the age of 25, you have probably heard of other games like: 7-card stud, 7-stud/8, Draw, Omaha, Omaha/8, Razz, and Lowball.

The question to ask yourself is, with all of the no limit hold’em action out there, is it worth your while to learn another variation of poker? I contend that it is. Let me spend a few minutes explaining why I think this is so.

First, let’s look at the argument of not learning a new poker game: It’s a distraction and diversion from the game that has been and will probably be the most profitable for you – the game you already play. Learning a new game of poker takes time and energy. Surely you’re better off if you put that time and energy into the game that is almost universally spread and played. If you’re already a winning hold’em player, then any time not spent playing hold’em is time you could be earning money playing it – instead of losing it by playing a game you have not yet mastered. Any time devoted to learning stud, for example, is just time away from either getting better at hold’em or, if you’re already a profitable hold’em player, then time away from winning money by playing hold’em.

This is all true. Even so, there are two strong reasons for learning a new poker game. It will provide you with more opportunities to win money; and it will help your main game so you can win more money at it.

Let’s look at them each in turn.

Sure, no limit hold’em is all the rage now. In some small poker rooms, it’s the only game that is spread. But lest you think that this is universally true, let me tell you from experience that many poker rooms – hundreds in fact – spread other games. In addition, the largest poker rooms in the universe – the online poker rooms – also spread many other poker games. In some of these other games, the quality of play is so poor that even if you became even moderately skilled at these games, they would sometimes be more profitable than your regular game. So not being at least moderately skillful at them deprives you of an opportunity to win more money than you are currently winning.

There are two reasons why I am sure that this is so. First of all, even though your game may be very profitable for you right now, I know from experience and observation that the quality of good poker games generally trends downhill. This is because, by definition, good games are not fully sustainable – containing as they do bad poker players. Bad poker players lose their money. Over time, even relatively deep pocketed bad players drop out – either losing their money or giving up on the game. They are often replaced by players who have at least learned not to lose. This in turn makes the games tougher – defeating players who used to at least break even, who leave the game – making them tougher still.

Do you have your doubts? Ask just about any pro about the quality of no limit hold’em games over the past five years. They all agree that they are getting tougher than they were, a lot tougher in some circles. This is because the worst players have given up and the average and good players have gotten better as they have taken advantage of all of their experience or the many ways to learn like online instructional sites, mentors, books, and the like. These games promise to continue to get tougher as time goes by.

If you only know one game, then you have no where to go when your game is tough. Just ask any stud player who failed to learn hold’em.

Here’s a case in point. I grew up as a stud player. I learned to beat the $5/10 game for two to three large bets an hour. I moved up to $10/20 and $20/40, and beat those games for about one big bet an hour. I played limit hold’em rarely, convinced as I was that stud was where I could make my money. But then two things happened. First, the stud games started to dry up as the bad players left the game and the remaining players learned a few things that made them better. At the same time, no limit hold’em started to catch on. Players new to poker, who once started out in stud, started out at the no limit hold’em tables – because that was what they knew from television.

I was faced with a choice. I could continue to try and take advantage of my fellow stud players – who were getting tougher to beat – or I could switch over to hold’em. Fortunately for me, I had learned at least enough no limit hold’em in home games to be able to make the transition. So I moved over, took advantage of all of the juicy new games, cleaned up, and became a very profitable no limit player.

Now when I go to a poker room, my game of choice tends to be no limit hold’em. That’s where the easy money is, more often than not. But I don’t always stay there. If I see a stud game that has all the earmarks of a great game, I sometimes move over and apply my skill there. Similarly, knowing Omaha/8, I can also move into one of those games and earn a profit. It’s not that I’m nearly as skilled in Omaha/8 as I am in stud and no limit hold’em. But at least I know enough to beat the worst players who sometimes fill a table.

It Will Help You With Your Current Game

Yes, learning another poker game may help you get better at your main game. This is because regular play tends to become habitual. Even great poker players, having learned to win by playing in a particular style, occasionally fail to play in an optimal thoughtful way. They can make money with automatic play, so they get mentally lazy, continuing to earn a decent rate an hour – even if with some thought and creativity they could earn more. It’s understandable. As long as these habits remain profitable, the need to examine them, tweak them, or discard them may not seem important.

Even so, habitual play is no substitute for a style that is constantly adaptive based on the situation you’re in. Your best play will sometimes be to deviate from your habit. Habitual play will, over time, surely cost you money that you would have earned had you been playing at your most thoughtful best.

Learning a new poker game requires you to go back to the basics of figuring out the optimal play in new and varied situations. Faced as you will be with situations you haven’t faced before – since you’re new to the game – you’ll be forced to use parts of your poker brain that might have atrophied from lack of use. You’ll be strengthening the muscle of thought – a critical ingredient to becoming better at your regular game.

I think back to high school. I remember taking algebra. I whined that I would never need to know algebra in the “real world”. My father told me that learning algebra would help me learn to think in a logical way – something that would help me with whatever I decided to do with my life. And he was right. Though I have never needed to know how to factor a polynomial equation in my job, learning how to do so helped me learn how to think.

In conclusion, to you no limit hotshots out there, who turn your nose up at learning other poker games, thinking no limit hold’em will rule supreme forever, let me point out that as recently as the early 1990s, the first poker game that parents taught their children was usually 5-card draw. I for one am now working on my Badugi. 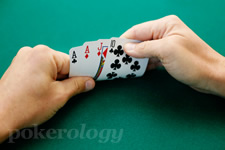 You’ll be strengthening the muscle of thought – a critical ingredient to becoming better at your regular game.