Once upon a time, poker players ruled Las Vegas. “Bugsy” Siegel had a high-stakes game in his suite at the Flamingo. Benny Binion put a heads-up match between poker pro Johnny Moss and legendary gambler Nick “The Greek” Dandalos on display in the front window of his famous Horseshoe casino. Texas road gamblers like Doyle Brunson, “Puggy” Pearson and “Amarillo Slim” Preston took down thousands of dollars a night from hometown heroes who came from all over the country to test themselves against the best in the game.

Just a few short years ago, another boost in poker’s popularity hit Las Vegas, as well as the rest of the world, like one of the A-bomb test blasts that had lit up the desert skies. The “Moneymaker effect” has been well documented, as have its repercussions in the worlds of both live and online poker. Many casinos that had never carried so much as single table began clearing space for this new, popular game. Those establishments that had previously set aside a few tables in dark corners for the few curmudgeons and characters who populated the game now created inviting poker palaces for all the brash young hotshots who dreamed of becoming the “next Moneymaker”. From luxurious rooms appointed in hardwood and leather to small areas roped off from the banks of clanging slot machines, Strip casinos raced each other to provide poker tables, dealers and games for the invasion of aspiring rounders.

This summer’s World Series of Poker will mark the sixth anniversary of the “Moneymaker miracle” and the trigger point of the poker boom. While the game as a whole has maintained its popularity in America and grown into a truly global phenomenon, the impact of the initial wave of poker mania appears to have crashed against the megalithic edifices of the Vegas Strip and settled to a steady trickle. Even prior to last year’s economic plunge, poker rooms on or near the Strip had begun to experience a period of closings, cutbacks and consolidations. In October of 2007, the Las Vegas Hilton closed their poker room and filled the space with high-stakes slot machines. Harrah’s-owned Paris Las Vegas bid “adieu” to their poker tables late last year, as did the south-Strip stalwart Tropicana. Just across the Las Vegas Boulevard, the Excalibur decided to replace their dealers and cards with electronic systems in a strange live/online hybrid. The mid-Strip mega-resort Treasure Island now closes its poker room when all live games break up and keeps the room closed until 10:30 a.m. As a consequence, Treasure Island laid off fifteen of their poker dealers and may soon close the room entirely.

Even for those poker rooms on the Strip still extant, the experience of playing in the gambling capital of the world has lost much of its luster. With the exception of a handful of opulent rooms such as Bellagio, Venetian and Caesars Palace, Strip casinos often place their poker areas in noisy, high-traffic areas that create distractions and hinder effective play. Smaller mid-Strip properties such as Imperial Palace, O’Shea’s and Bill’s Gamblin’ Hall (formerly Barbary Coast) have a handful of tables near the entrance. Planet Hollywood recently moved their poker area to a space near the entrance to their nightclubs and restaurants. Hooters Casino has isolated their three poker tables (barely enough to qualify as a “poker room”) in the far rear of the casino near the player’s club booth. From the lack of tables and games to poor service to inadequate comps, Las Vegas Strip casinos have increasingly ghettoized the game that once brought in players by the thousands.

Obviously, some of the blame for the decline of poker on the Strip must fall on the current general economic malaise. Layoffs and cutbacks have not solely affected Las Vegas poker operations: according to reports, the unemployment rate in Nevada is over nine percent. Players who would typically travel to the city several times a year have either curtailed or dropped plans to visit. Major conventions slated for the city have also seen a decrease in attendance, resulting in a severe drop-off in hotel and casino revenues.

Another reason that poker on the Strip is suffering is that, previous to the recent mortgage-backed securities collapse, many Strip properties were taking their focus away from gaming in general while they endeavored to build new hotel and condominium properties. With the failure of these mortgage-driven instruments and the restrictions on credit needed to complete these ambitious projects, construction ground to a halt and properties suffered massive losses. One way these casinos found to save money was to cut out loss-leading facets of the business. Since many poker rooms did not see substantial traffic apart from major tournaments, they became an easy target for cost-conscious casino executives.

Yet another reason for the decrease in players at major Strip casinos is the prevalence of online poker. Many players are saving the money they would spend on airfare, carfare and hotels by staying at home or playing on their laptops. With the explosion of online poker, many young pros do not need to travel to Las Vegas to fulfill their dreams of playing in huge cash games or high-stakes tournaments. Most of them play multiple tables simultaneously, lowering their variance and seeing more hands in more situations in far less time than would be humanly possible in a live environment.

The question remains: is poker on the Las Vegas Strip in danger of dying? For many Strip locations operating on the line between the haves and the have-nots, the elimination or reduction of poker rooms makes good business sense. For those Strip casinos that have made much of their reputation through poker, they recognize the value in maintaining a certain level of service and ambiance in their presentation of the game. However, economic slowdowns and competition from both online and land-based casinos in other parts of the world may force the closings of even these venerable arenas of the game and force it back into the dark, dank corners from where it had once emerged. 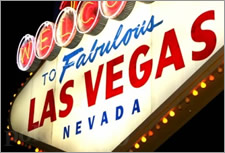 Even for those poker rooms on the Strip still extant, the experience of playing in the gambling capital of the world has lost much of its luster.