Is it Bad to Feel Good at the Poker Table?

Everything in moderation – Socrates

It’s no secret how negative emotions can impact the way we play the game of poker. Fear can transform even the strongest of poker players into a weak-tight milquetoast, while anger can make him spew chips faster than a wood chipper on overdrive. The correlation between the negative feeling and the undesirable result is usually immediate and easy to recognize. But what about the other end of the emotional spectrum, the so-called “good” emotions? How can feelings like love, happiness, and compassion affect the way we play? We’ve become conditioned to associate these pleasant, admirable emotions with all that is good in life, so it’s only natural to think these great feelings will help us to be better poker players. But not necessarily, and not always.

Truth of the matter is, any emotion can become a destructive force when it’s taken to the extreme. Think of love. It may make the world go ’round, but any time that love – whether it’s love for another person, a hobby, or even for an object such as a car – becomes so overwhelming it begins to take too much focus away from other important areas of your life, that’s a problem. Once the passion has reached the point where you begin to neglect other relationships, your job, or even your health, then love is no longer a benign, benevolent force.

In the cutthroat world of poker, love is simply out of place. Arguably, love for the game itself can be a problem for some players, sucking up too much of their time and energy – and for losing players, far too much of their money. When players are either too lazy, too stupid, or too impatient to learn how to play poker properly, a love affair with poker is an infatuation they literally cannot afford.

On a more personal level, love for another poker player can pose a predicament if said player is sitting across the table from you as an opponent. Legendary poker player and 1982 WSOP Main Event champ Jack Straus once famously stated that he would bust his own grandmother if she played poker with him. To succeed at the highest levels of this game, where it’s eat or be eaten, that kind of attitude is almost compulsory. But for most of us regular folk who play in regular games, it’s difficult to be a poker shark when your prospective victim also happens to be a loved one. The trade-off is fewer chips and less glory in exchange for a more harmonious personal relationship. Naturally it’s up to each individual player to decide when and if that trade-off is worthwhile.

Perhaps the most insidious form of poker amour is the affection we develop for the cards themselves when they take on the appearance of a surefire winner. Big pocket pairs, flopped miracle straights, promising draws to the nuts – all these hands and more can wield an hypnotic, seductive power when they stare back up at us from the felt. They draw us in with silky promises of chips to be won and opponents to be conquered. And for a dedicated poker player, this is the kind of lust that knows no bounds. No matter that one wrong card from the dealer can transform the alluring winner into a grotesque and expensive loser. Love is blind. As anyone who has ever been in love can attest, it can be excruciatingly difficult to say goodbye. In life, the cost of refusing to let go can be catastrophic. In poker, the cost is a loose call or two…or twenty. Or more. Which soon adds up to catastrophe.

If love is bad business at the poker table, compassion is even worse. Taking advantage of weaker opponents is what poker players do. Whether it’s stealing a tight opponent’s blind, steamrolling over a desperate small-stack, or playing circles around a dim-witted schlub, predation is the name of the game. But when you’re up against an opponent who is not only a poor player but who is clearly incapacitated in some way – drunk or high or under some kind of extreme emotional duress – is that opponent still fair game? Do you still feel good about taking his money? Perhaps you feel a twinge of guilt but still go ahead and take his money anyway. Or does the temptation to soft-play begin to creep its way into your consciousness?

What if you know this unfortunate soul is playing with money he cannot afford to lose? This is where the line between your livelihood as a poker player and your ethics as a human being can really get fuzzy, unless you know ahead of time exactly where you want to draw it. Compassion, one of the most admirable and noble emotions we can experience in life, is just another Achilles’ heel when it comes to poker.

Even a feeling as sublime as joy can be counterproductive in the context of a poker game. Exhibit A: celebration. When elation over a win gets so excessive that the player on the losing end begins to see it as gloating, that’s the kind of problem that can come back and bite you later on. Even without Tournament Directors everywhere standing at the ready to punish players who break the excessive celebration rule, losing-end opponents will be eagerly waiting for the chance to mete out their own punishments.

Celebration is also cause for alarm when it’s premature. This can take many forms, from the small-stakes poker player who’s so busy mentally counting the pot he’s about to win that he doesn’t even realize the river card counterfeited his hand, to the tournament chip-leader who somehow manages to snatch defeat from the jaws of victory by blowing a massive lead at the final table. What it all really boils down to is just another form of overconfidence, which itself is a prime example of a good emotion becoming destructive once it’s taken to excess. The common denominator here is loss of focus. It’s impossible to fully concentrate on achieving your goal when part of your brain is already celebrating the win – conveniently glossing over the fact that the contest still ain’t over.

There’s a strange paradox in all of this. All of us began playing poker in the first place because on some level, the game made us feel good. It was fun. And that’s why most of us continue to play. So we play poker to feel good but if we want to play the game well, we can’t let ourselves feel too good – at least not until we’ve walked away from the table. Feelings like love, joy, and confidence, which enhance our lives immeasurably, can all become liabilities at the poker table if we let those feelings get out of hand. 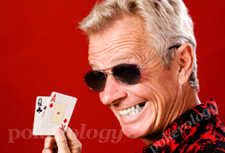 If love is bad business at the poker table, compassion is even worse. Taking advantage of weaker opponents is what poker players do.