How ya’ running? Well, unless you’re just in neutral and idling, you are either running good or running bad at poker. Let’s take a look at both sides of this equation and see what we might be able to do to cut short running bad and to extend our good fortune when running good.

We’ll take a look at the bad news first as that may well be the more critical of the two. When you’re running bad and your pocket Aces are regularly cracked and your draws never seem to get there what should you do? Many poker players do the exact opposite of what will serve them well and begin to tilt making things worse. They not only perpetuate the losing streak but through their actions actually make it more severe. When you realize that you’re running bad, think of it as the true test of your character and mettle as a poker player. How one deals with adversity tells a lot about that person in life as well as poker. It has been said, “Adversity introduces a man to himself”. Endeavor to admire the man you are meeting!

Of all the many things you can do when you’re running bad, the one single thing you should be focused to is “Don’t make it worse”. I know that may be easier said than done but making that your credo will help get you through a down spell making it much easier to turn things around, if for no other reason than limiting the size of the hole that you dig. You see players all the time who are getting beat and then make it worse with all kinds of bizarre behavior. Above all, do not succumb to the lesser player’s inclination to go on tilt.

That having been said, what actions should you take to get this ship turned around and headed back in a profitable direction? The first thing one should do when finding himself in a slump is examine his poker game in an effort to determine why it is occurring. Is Lady Luck really treating you that poorly or have you developed some sloppy habits which are contributing to this downward spiral? Have you loosened up and developed a habit of playing too many marginal poker hands? Have you started to regularly push thin edges? Are you betting on the come too frequently? Have you examined the lineups in the games you’re frequenting? Have you lulled yourself into a feeling of invincibility after a string of victories? If so, you’ve let arrogance sneak into your game and that’s a definite prescription for disaster. Old Mr. Ego strikes again! Hubris is the cause of many a downfall.

One needs to examine the questions presented in the previous paragraph and determine if they have veered off their A game and are possibly playing a C or D game. Maybe it’s time to take some time off and temporarily get away from the game. You might consider shortening your sessions. Many times over the course of a session one’s chip stack can fluctuate dramatically, so make sure to quit on the upside. If you “manufacture” a win in this manner it can help psychologically by breaking the string of defeats. One key adjustment you should make when it seems the Poker Gods are spiting you is to tighten up. Many players do the exact opposite in the hopes of building a big pot. There is no question that it’s a great feeling to aggressively press a strong draw and then hit it and scoop a nice pot. However, when Lady Luck is being fickle that same play can be a real chip burner. You should become a little more conservative when the cards are not falling your way and wait until the storm blows through.

If upon careful examination of your game you can honestly say that all the basics are in tact and you are playing strong, solid, disciplined poker and the cause of your misfortune is truly a bad run of cards, don’t despair. Stay tilt free, continue to make good decisions and before you know it you’ll turn the corner to better times. Remember, don’t make things worse by digging a hole climbing out of which may prove difficult. Tend to get a little more conservative and focus on making good poker decisions. Analyzing a session after the fact and being able to feel you played well and that a lesser player would have lost much more can also be a source of accomplishment.

Well, what about the flip side of the coin? Running good in poker is a wonderful feeling. You’re playing well and getting hit with the deck. Man, Oh, man – stacking and racking and starting to feel like you must be a world class poker player. Nobody can touch you. They fold to your bluffs and you always have the goods when they call. As wonderful as this is, many poker players begin to take their run for granted, attributing it to 100% skill (there’s no such thing as luck!) and thereby help end it prematurely.

Several dynamics of the game change when a player starts to really run well and gets on a rush. Some of these dynamics are positive and helpful in keeping the run alive while others can work counterproductively to curtail the run. Let’s look at a few of these factors. On the positive side, your opponents may begin to fear you which can facilitate your ability to steal pots. Your confidence may grow as opponents seem to try and stay out of your way and as the stacks of chips in front of you grow so does your image. On the negative side of the ledger, you may begin to loosen up and begin playing thinner and thinner edges. As your confidence grows and you believe you have become invincible you may begin to play a little foolishly, actually drifting into what can only be described as “positive tilt”. This form of tilt can be every bit as chip depleting as its bad beat induced cousin.

Since running good is such a wonderful feeling we should do everything within our grasp to extend the length of the run. Allowing your good fortune to seduce you into popping the clutch and peeling rubber on every hand can quickly curtail your good run and result in donating back a good portion of what you’ve accumulated during the run. How many times have you seen a player you would describe as having a horseshoe up his derriere based upon a wild rush and an hour or two later is almost down to the felt? I’m not suggesting you retreat into a timid shell to protect your winnings but loosening up beyond sensible standards is just foolhardy.

What we really need to do when we find ourselves running good is to get our heads around why it is occurring, to help make adjustments to maximize and extend the run. Enjoy your good fortune but determine the genesis of it. If you determine that you’ve just been a little lucky with quality hands then pushing those thin edges can backfire and cost you a lot of chips. However, if you determine that it is more than just some well placed good poker hands and you are playing with much weaker opponents, then by all means kick it up a notch or two and take control of the table. Just recognize that few really good things last forever, with the possible exception of the love of your soul mate. Recognize also that in both love and rushes, it takes a lot of work for the good fortune to last.

Well there you have it. Running good and running bad. No rocket science here. You want the good run to last and nip the bad run in the bud. Always ask yourself, “Why is this happening?” If you do that whether things are going well or are in the dumpster you should spend more time running good than bad. 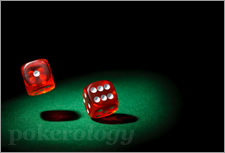 No rocket science here. You want the good run to last and nip the bad run in the bud.