Learn How to Shuffle Cards

Many people have difficulty shuffling playing cards, and this can be problematic when playing at a table without a professional dealer – such as in home games or self dealt games (where each player takes it in turn to shuffle and deal). The solution to this problem is to get a pack of playing cards and learn how to shuffle – which is the objective of these card shuffling tutorials.

Over the years I’ve sat next to lots of players who say “I can’t shuffle” or “excuse my poor shuffling”. If they’re really bad then someone usually offers to shuffle for them, for which they’re usually grateful. If you fall into this minority of poker players then now is the time to learn. You probably can’t shuffle because you’ve never been taught the correct techniques. While you may think shuffling cards looks hard or complicated, it’s actually fairly easy. It’s similar to when you learn how to play poker, i.e. understanding the correct techniques, and then practicing. Repetition is the key to success!

There are many different ways to shuffle a deck of cards. For these card shuffling tutorials I’ll be covering the following methods:

The overhand shuffle is the shuffling technique most employed by beginners so this is where we’ll start. The standard overhand shuffle is a simple way to shuffle cards. It is a very open, casual, somewhat sloppy shuffle, in contrast to the more elegant riffle shuffle and table shuffle which will be explained later.

I don’t know why this is called the Hindu shuffle, but my guess is that it originates from India. I have seen lots of Asian people shuffle cards using this technique. There is a similar shuffle called the Arab Shuffle, but I prefer this handling. The shuffle is very simple and quite easy to perform. Once you have the hang of this shuffle I’m sure you’ll use it all the time.

The Riffle Shuffle (in the hands)

This is a great way to shuffle cards. While this shuffle looks impressive, it’s actually far easier than you might think. Yes, I’ll admit it does take some getting used to, but once you have a feel for the cards it’ll be second nature.

This is a simple shuffle which you will see performed at the casinos or poker rooms. The reason this shuffle is used is because it is very effective and it is impossible (depending on the dealer) for the players to see exposed cards. The previous shuffles often give other players a chance to glimpse at the bottom card.

The Strip Shuffle (or Running Cuts)

This is a very nice casino type action and an ideal shuffle to combine with the riffle table shuffle. It can be quite tricky to get used to the handling, but definetly worth the effort.

One Response to “Learn How to Shuffle Cards” 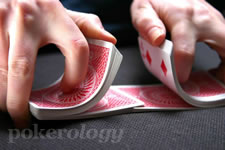 The cascade finish looks really nice and it's the easiest part of the shuffle.