How Fragile is Your Poker Ego?

It is a fact that the majority of people do care about how they are perceived by others. Certainly we all know or have observed some folks that do not seem to care one twit about what opinion others hold of them – true free spirits! The reason most people do care is due to their ego or self image. We have all seen behavior at the poker table that validates this premise. As an example, a player wins a big pot after showing down a truly worthless starting hand and feels compelled to explain to the table that he was in the big blind or had to post thereby justifying his play of rags. Why do some poker players feel the need to explain to others why they played a hand in a particular way? Quite simply, it’s because they do not want to look foolish in the eyes of others. The irony of this ego fueled behavior is that they would be better off being deemed clueless by their foes instead of explaining their actions to appear in command of their game.

Another example of out of control egos at work at the poker table is the self appointed “Strategy Professor” who loves to give strategy analysis after each hand (see poker personality types). This is many times witnessed after the “Professor” is victim to a bad beat and launches into a diatribe outlining what a complete idiot his opponent is for having chased a long shot and sucking out a winner. I used to sit there in bewilderment as to how anyone would indulge themselves in that kind of boorish behavior at the poker table, until the obvious hit me and I realized it was just a case of an out of control ego.

Of course information is power in poker and knowing which of your opponents may possess a fragile ego is important. These are the players that can be driven off marginal holdings as they have a concern about winning with junk and then being embarrassed at the showdown. So, how fragile is your ego? You probably quickly dismissed the question because you know you don’t fall into the examples outlined above – or do you? Well, we’re about to find out how much you care about the opinions of others and just how fragile an ego you may possess.

If you are emotionally well grounded to the point of not needing the adulation of strangers at the poker table, then I’ve got a cunning play you might enjoy adding to your poker repertoire. This play, while testing just how fragile your ego may be, will enhance your knowledge of your opponents’ level of understanding of the game and also their emotional makeup. With this one play you will be able to assess which of your foes knows the correct mathematical underpinnings of the game and also who among them cannot control their ego driven desire to be looked upon with favor by their tablemates. You will need to wait for an opportunity to present itself such as a player showing down a winning set at the showdown. You then make a conversational statement such as, “Wow, another set… I can never seem to hit a set on the flop even though the odds are only 3-to-1 against”. I know I heard a few gasps and/or snickers from you readers and yes, I know the correct odds of hitting a set on the flop while holding a pocket pair is 7.5-to-1 not the stated 3-to-1. That, my friends, is the whole point. You make an incorrect statement and sit back and watch the action.

If your ego can stand verbalizing this mistaken quoting of the odds, you will certainly learn about your opponents. Some poker players can hardly wait to correct you to demonstrate to the rest of the table what world class players they are because they know the correct odds. Sometimes two or three players jump in at the same time trying to be the first to show everyone just how knowledgeable they are. It can actually be quite humorous but don’t laugh or you might give yourself away. Of course, the more savvy of your opponents won’t respond but sit in silence taking in all the information that you have made available. Watch for everyone’s reaction because the smart, silent ones are also giving you information to use.

So, is your ego too fragile to attempt this little ploy? It always amazes me at how some knowledgeable players yearn to be highly regarded when, if they are truly that knowledgeable, they would be better off keeping it a secret. They should realize what they are illuminating should be kept in the dark. Knowledge is power and knowing who knows the math of the game and who cannot control their ego can help you relieve them of their chips.

Personally, I like to really lay it on and when I’m corrected about the mistaken 3-to-1 odds regarding hitting a set, I respond with, “Oh, yeah that’s right. The 3-to-1 odds are for a straight draw. I always get those two mixed up”. I like to watch the eyebrows jump around the table along with the half smirks indicating to each other what a fish just swam into their pond. They all hope to get their fair share of the easy mark’s money. I like to win their money but I also enjoy getting into their heads and messing around with their perceptions. It makes winning their money that much more enjoyable as they have trouble rationalizing how they lost to a complete fish.

I guess some of them never learned the wisdom of the adage, “You can’t tell a book by its cover”. Having revealed this ploy, I now need to be more suspect if I hear it being used at my table. Oh, well – that’s poker. 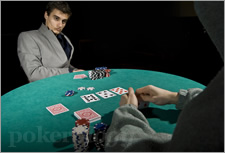 I like to win their money but I also enjoy getting into their heads and messing around with their perceptions.