Home Game Antics – What Are Friends For?

I was part, as many of us over the years have been, of a dedicated weekly home game. It was great camaraderie, great poker and an event that the whole group looked forward to each week. This is a tale of a particular hand of seven card stud which was played seven handed. It was the very first hand of the evening.

I was sitting to the right of the dealer. What does every stud player hope to see on third street but only does about once every 425 deals? You guessed it, being rolled up with Aces no less! As I looked around the board, the only other interesting card was a King across the table from me. The 3 of clubs was the forced bring-in. There were several players to my right and I decided to slow-play my rolled-up Aces, a true monster in the making. The three brought it in, I called, and so did everyone else! All seven players were in making it a family pot.

Fourth street didn’t bring anyone any real help. There were no pairs, but the lowly three of clubs caught the four of clubs – interesting. I checked my Ace, the King picked up the bet, and everyone called. Everyone, all seven players! This was really unusual.

Fifth street brought a King to the King, a third club to the 3 and 4 of clubs, but not a connector, and I caught the fourth Ace. I was showing Ace-blank-Ace and figured that the field now would be narrowed. I was thrilled to have trapped so much dead money thus far. I bet, received two calls, the Kings raised, the three of clubs re-raised, and it was two more bets to me after the players in between just called. I raised again and everyone called! I couldn’t believe it – we were still a family pot after a triple raise on fifth street! This was a home game and a little looser than your normal $15-$30 casino stud game, but these guys weren’t maniacs.

Sixth street didn’t appear to help anyone and I was still high with a pair of Aces (and two in the hole). I bet, and after a few calls, the Kings raised. This couldn’t be true, I said to myself, but it was. Everyone called to me; I re-raised the Kings and everyone called. I was thinking that this was going to be some night if this, the first hand of the night, was at all indicative of the way things were headed.

The river card was dealt and someone said, “It’s on the Aces,” and all eyes were on me. I said something like, “I guess I need some help,” and proceeded to take a peek at my river card. In fact, I took two or three peeks at my river card because it was an Ace! After the shock of realizing that it really was an Ace sank in, I thought about how I could have possibly misread my hand on third street. So, I proceeded to take a peek at my first two hole cards which hadn’t been touched since my very first adoring glance at them back on third street. Sure enough, this pro hadn’t misread his hand – I did start off with rolled up aces. The problem was that I now had five Aces – there were two Ace of spades!

I was sitting there in a bit of shock when I heard the voice again, “It’s on the Aces”. I finally blurted out, “I think we’ve got a problem fellas”, to which I heard, “Like what, five aces? Happy April Fools’ Day!”

My buddies, my pals, my fellow card smiths had spent the day plotting this prank just to jerk my chain for April Fools’ Day. Well, I didn’t know whether I should be angry or flattered. Everyone had a good laugh and then the monster pot was equally divided among all seven of us. I finally understood why everyone was in the hand all the way to the river. I guess the lesson here is; if you’re playing poker with your buddies on April Fools’ Day, then be aware – be very aware! 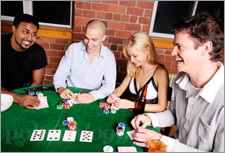 This was a home game and a little looser than your normal $15-$30 casino stud game, but these guys weren’t maniacs.