Many live poker cardrooms and casinos offer promotions to help encourage traffic at their venues. Most of these promotions can actually change the way the game of poker is optimally played. There are also game changers that individuals can make to change the dynamics such as posting straddles. Today I’d like to review the more common game changers to encourage you to focus on just how they may alter what normally would be considered solid play. Make sure you’re aware of how some poker players will adapt their game plan when participating in one of these hybrid poker games because as the title infers they are “Game Changers”.

Bad beat jackpots are normally funded by the poker players themselves through an additional rake or drop. Many times they can become quite large and attract all kinds of players who are only in the game in hopes of hitting or participating in a bad beat hand. Normally a bad beat requires, at a minimum, aces full of tens to be beaten. Also, both cards from one’s hand must be used. Obviously, the rules change from venue to venue but what I’ve outlined is typical. A typical payout would be fifty percent of the pool going to the loser of the hand, while forty percent would go to the winner. The balance of ten percent would be shared equally by all other active poker players and is called a table share. These percentages, just as the criteria for qualifying for the jackpot, are flexible depending on the venue.

A poker game that is subject to a bad beat jackpot can change when the jackpot grows large enough to entice players that would not normally play the game in question. Sets are now frequently slow played in hopes of turning them into quads, players from higher stake games, who are usually stronger, may begin playing in the jackpot game until the jackpot is hit and many players will usually play any hand that represents jackpot potential, such as any pocket pair. All of a sudden the focus is not on playing the game of hold’em well but playing in a manner which will increase the odds of hitting a jackpot. That’s all well and good as long as you realize that your competition may begin playing very differently when there is no jackpot involved.

These promotions award a player with a fixed prize ($50 as an example) for getting dealt four of a kind or a straight flush. Some poker venues award a significantly higher reward for a royal flush. These promotions come and go and are usually prevalent in the smaller stake poker games. The management feels it is a small price to pay in order to help keep players filling their chairs and contributing to the drop.

This is another normally low stake “Reel ’em in” promotion run in smaller cardrooms. A typical scenario would be a $2-$4 limit game which would be played with one dollar chips. If you are dealt pocket aces and wind up getting them cracked, you receive a rack of one dollar chips equaling one hundred dollars. Of course limit hold’em $2-$4 pots don’t come near a hundred dollars so you can see that players holding pocket aces will not raise to thin the field as they want as many opponents as possible to help beat them. The value of pocket aces goes way up as you will either win the pot or a rack of chips. Many times these games are populated by players who are participating mainly in the hope of getting their pocket aces cracked while passing time.

To the uninitiated, kill games are normally a limit venue game changer which stipulates that when a player wins two pots in a row he must post a double live blind. Some cardrooms mandate that the pots need to be of a certain size while others rule that any two pots in a row qualify. There are also half kill games which only increase the stakes by 50 percent. The main effect is increasing the stakes and this dynamic can cause several changes in the game. First, some players are moved out of their comfort zone which can be exploited by observant bullies. Other players love to see the stakes doubled and open up their game significantly and raise liberally in hopes of dragging a big pot.

Straddles come in several sizes, shapes and colors and all of them reveal that the player who posts one is somewhat of an action junkie. A straddle is just an additional blind that is double the big blind which is normally posted in what would be the under the gun position. This move has a greater impact in no-limit games as it essentially raises the stakes for the entire hand. In addition, a straddle is normally considered live which means when the betting gets back to the straddler, he may raise as an option just like the big blind would be given. I guess the most famous straddle these days for poker aficionados would be the $1200 straddle on the very popular High Stakes Poker television show. Most straddles I’ve personally witnessed live are quite a bit smaller. I guess that’s because I don’t play in games where the normal blinds are $300 and $600.

There is also a Mississippi Straddle which is posted on the button and the action then starts with the small blind. This straddle has been gaining popularity in several locations so if you haven’t seen it yet, it may well be headed to your cardroom in the near future. It has the advantage for the straddler to further empower the position of the button.

Whatever the form of straddling – it essentially is raising the stakes and can create the same dynamics as outlined in the kill game section. Some players can be moved out of their comfort zone while for others it signals a feeding frenzy which in turn moves the more conservative players even further outside their comfort zone.

The one common thread these “Game Changers” share is that they sometimes encourage certain players to play against the conventional wisdom of sound poker strategy. While that may well have a benefit to the more grounded and serious poker students, it can also create havoc. My advice is to play your best “A” game as if one of these dynamics was not in play and if, in the process, you stumble into a bad beat jackpot or a free rack of chips then good for you. The key is to recognize that some players will be modifying their game to a strategy they believe will increase their chances of exploiting the “Game Changer.” May the flop be with you! 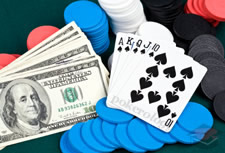 Some players can be moved out of their comfort zone while for others it signals a feeding frenzy.