The beginning years of the twenty-first century have brought some incredible highs and devastating lows. The poker world has not been insulated from these ebbs and flows. With the peaks in poker’s popularity brought by the hole-card camera, the explosion in online poker and the “Moneymaker effect”, the valleys that poker players have encountered due to the UIGEA and the online cheating scandals have left many observers of the game to ask, “What’s next?”

Thanks to a specially modified DeLorean fueled by the rage of the “online poker is rigged” conspiracy theorists, our experts at Pokerology have been able to view the future of poker through the rest of the century. Here are some highlights of poker’s future:

2016: “Grand Old Man” Joe Cada wins his second Main Event title and now has enough money to buy the entire state of Michigan, with a few million left over.

2018: At the Tournament of Champions, eighty-five-year-old Doyle Brunson finally gets tired of listening to Phil Hellmuth’s whining. Brunson beats the “Poker Brat” with his cane and runs over him with his fusion-powered scooter.

2025: Tax revenue from online poker surpasses US$700 billion, slightly less than Mike Matusow loses on sports betting in a year.

2028: Phil Hellmuth runs for President, vowing to invade Scandinavia and rid Americans of those “idiots from Northern Europe”. He loses in a close race to Jenna Bush and claims in his concession speech, “If it wasn’t for luck and family connections, I’d win every time.”

2033: Doyle Brunson celebrates his hundredth birthday by posting a pithy saying in on TweetBook, winning ten million dollars at the “Big Game” and fatally beating a Democrat.

2034: Seventy-year-old Phil Hellmuth arrives at the WSOP in the costume of an “old-time” poker player: a black baseball cap emblazoned with the logo of a defunct poker site, external earbuds, sunglasses, and a logoed hockey jersey.

2039: The grandchildren of seventy-five-year-old 2009 WSOP runner-up Darvin Moon buy him a Jitterbug cell phone. He throws it away, unable to understand how a phone can work without wires.

2041: The United States goes broke after the Treasury Secretary, only known as “isildur1”, loses the biggest pot in online poker history. He bets the entire US Treasury against Patrik Antonius III in a pot-limit Omaha heads-up match when Antonius’ river royal flush beats isildur’s quad aces.

2043: With the US completely broke, China now has to “stake” the country. Chinese Poker and Pai Gow replace Texas Hold’em as the most popular card games.

2047: Phil Hellmuth takes the Ultimate “bad beat” when he passes away at age 83. He leaves his entire fortune to an up-and-coming biogenetics research firm.

2052: The invention of telepathy technology has created a world of peace, understanding and freedom. It has also done what no misguided law could do: kill poker.

2054: A few diehards still participate in the WSOP Main Event, including 121-year-old Doyle Brunson. He beats a field of six to win his third world title and says, “This is just like the good old days.”

2057: At the age of eighty-one, Phil Ivey wins his fiftieth gold bracelet, surpassing the late Phil Hellmuth’s record. The final table included two players who got lost on their way to the sports book.

2062: CompletelySlanted.com, the last of the old-style poker “web sites”, closed up shop after an investigation revealed that, in fact, online poker really is rigged against good players and in favor of idiotic donkeys on longshot draws.

2067: Telepathy devices are banned after the divorce rate reaches 99.997%. Poker experiences a resurgence not seen in more than sixty years.

2073: Harrah’s/MGM Grand hosts the first poker tournament held in space. Doyle Brunson wins another title at the age of one hundred forty.

2076: Phil Ivey passes away at the age of one hundred. Sports books all over the planet go dark in mourning.

2078: Phil Hellmuth 7.2 becomes the first recognized clone to win a WSOP bracelet. Officials have yet to decide if this should count toward his clone-father’s record.

2081: President Saskia Obama-Winfrey creates the “one for you, nineteen for me” tax plan on poker players, the steepest rake seen outside of the legendary PokerStars web site.

2084: An attempted robbery at a Houston home poker game atomizes half the city in the resulting firefight. As one survivor said, “Never bring a plasma rifle to an ion cannon fight.”

2088: Humanity encounters the first intelligent alien species. Phil Hellmuth 8.6 nearly starts a galactic war when he complains about “idiots from other planets”.

2093: Doyle Brunson passes away at the age of one hundred sixty, just days before the publication of “Super System 3”.

2095: Texas secedes from United Earth and demands royalty payments for the name “Texas Hold’em”, although the game is still illegal there. WSOP officials change the name of the game to “Brunson Hold’em” in honor of the legendary Doyle Brunson.

2099: The 130th Annual World Series of Poker draws thousands of players from all over the galaxy in a gathering of peace, fun, and friendship.

In the spirit of the Christmas, we should remember how Ebenezer Scrooge’s nocturnal visitors told him that the visions he saw were not set into (tomb)stone, but only a possible series of outcomes. The true future history of poker will be funnier, sadder, more wonderful and more aggravating than anything a single writer can create, if only because we are all writing that history every year, every day, and every hand.

Welcome to the future!

One Response to “Future Poker Predictions” 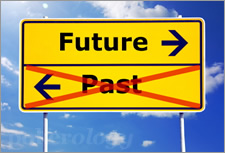 Telepathy devices are banned after the divorce rate reaches 99.997%. Poker experiences a resurgence not seen in more than sixty years.