Free Pub Poker: Is It Worth It?

As the popularity of no-limit Texas Hold’em tournaments has spread around the world, new avenues for the game have sprouted up like mushrooms after a rainstorm. Most major casinos have their own dedicated poker rooms for both hardcore players and newbies to the game.

Pub poker has allowed thousands of players to enjoy the poker experience, but how does it affect true students of the game? We’ll examine the benefits and dangers of playing in these pub poker games.

The biggest benefit to pub poker is that it costs nothing to play. Some establishments may offer extra chips at the start of the tournament for every drink or food order a player makes, but players can expect to receive a typical starting stack without the need for a buy-in.

For those players accustomed to playing online poker, the feel of a live tournament is much different. Real cards, real chips and (*gasp!*) real opponents can make for a much more interesting night at the table than even the most advanced mouse and highest-resolution monitor can provide. Online poker players who aspire to play in big-time TV events can start with these “training wheel” tournaments to get a better feel for how live play works.

Benefit #4: A Wide Range of Players

Since many of the establishments that run pub poker tournaments do so during their “Happy Hour” promotions, players from a wide variety of occupations and skill levels come to play, have a few drinks and wind down from the stresses of the workday. Doctors, lawyers, laborers and entrepreneurs join in on the game on and equal basis. In fact, the only profession you’re not likely to see represented at a pub poker tournament is a pro poker player!

Every player can benefit from practice games in a live poker setting. Players who do not live near live cardrooms can learn new skills and hone their arsenal. Online poker players, accustomed to onscreen chip counts, can learn how to count a pot as the bets go in. Players can also learn how to read an opponent’s betting patterns and physical poker tells, signs that are not typically obvious in an online setting.

While pub poker events can be fun and beneficial for rookies, experienced poker players should watch out for some of the pitfalls involved with these “free” tournaments that can lead to costly mistakes.

Don’t expect long levels and slow play in a pub poker tournament. These free poker events are meant to last three to four hours, as compared to multiple days for tournaments on the major poker tours. A typical pub poker event will call for new levels every fifteen to twenty minutes. If you don’t catch cards and double up early, you may be forced into “push and pray” mode much sooner than expected in order to survive.

Not only do many of the players at pub poker tournaments lack the experience and knowledge of the seasoned veterans, many of them may not know if a flush beats a straight! They often act out of turn, make incorrect bet sizes, and generally have a poor understanding of the rules of the game. They fall in love with drawing hands, catch a lucky card, and start to believe that poker is all about luck.

The old poker saying goes, “you can’t bluff a donkey”. Most pub poker tournaments are a donkey convention! Rookie players don’t understand that, on occasion, a fold is the best play they can make. Also, since none of the players invested any money into the pot, they’re not afraid to lose a hand because they have nothing to lose. If it doesn’t cost anything to stay in a hand, why not stay all the way and see if you can “get lucky”?

The bad players, the fast blind levels and the loose atmosphere of pub poker games can make players forget the skills that served them so well in cash games and real-money poker tournaments. Pub poker tournaments may sometimes make good players play “down” to the level of their competition and forget the lessons they’ve learned in more lucrative settings. Keep in mind that success at the different games require different skill sets, so good poker players can adjust according to the environment.

Some casino cardrooms are quieter than major public libraries: the only noises you may hear for hours on end are the clink and rattle of chips and the snap and shuffle of cards. In pub poker games, you can be hounded by waitstaff, assailed by jukebox music or pestered by intoxicated bystanders. Even if you can keep your focus amidst such chaos, some of your opponents may lose their concentration and slow down the game, so be prepared for occasional frustrations and delays.

The key to success in pub poker events is to go into the game with the proper expectations. If you expect to dazzle a table full of fish with your brilliant play and mastery of the game, forget it! If you treat the game as more of a social event and a practice session rather than a WPT final table, then you should have a good time, win or lose! 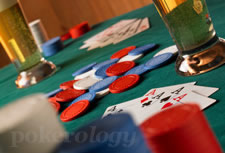 The key to success in pub poker events is to go into the game with the proper expectations.