Eric Drache may not be one of the most well known names in the poker world, but as you will learn, he’s helped make many poker players the most popular in the world. His contributions to poker are largely responsible for making the game the success it is today. Drache has been both on top of the mountain, and on the bottom looking up, but what he has done for the game cannot be denied.

Eric Drache first stepped into the poker scene in 1973 when he became the tournament director for the World Series of Poker (WSOP). In this day and age the job would be considered one of the best in poker, but during this time many of the professional poker players scoffed at the idea, wondering why the tournament even needed a director. After all, in the previous year the Main Event only had eight entrants and the entire series itself only had one other event, five-card stud. Drache immediately made his presence felt. In his first year he added four events to the series, and the number of entrants jumped to 13! However, Drache was just getting started.

By 1978 the Main Event entrants had jumped to 42, and it now had 11 total events, yet Drache still felt like something was missing. A day or two before the start of the 1978 WSOP main event, Drache was walking around the poker room when he noticed a full-ring cash game going on. He noticed that each player had at least $1,000 dollars on them. Drache has an idea that would change the game of poker forever. He went over to the table and told them that they should all leave just $1,000 on the table and play winner takes all. The winner, then, would have the $10,000 entry buy-in to the main event. This of course was the birth of the satellite tournament. The tournament that has given the likes of Chris Moneymaker the opportunity to turn $40 dollars into 2.5 million dollars, and countless others the chance to play in tournaments they otherwise couldn’t afford.

The birth of the satellite changed tournament poker forever. Since the introduction of satellites officially in 1979, the WSOP main event grew every year, with the exception of 1991 and 2006, where it peaked at a whopping 8,773 participants.

Drache’s other contributions to tournament poker made the game a more enjoyable experience for everyone. In the early 70’s, many tournaments seemed to “wing-it,” not having any idea when they were raising their blinds or if they should do antes, things that aren’t second guessed today because they are mostly run smoothly. Drache introduced ante structures and pressed for unified rules in all poker tournaments in Vegas, which took longer to accomplish, but has since become the norm for casinos everywhere. Drache also was the first to actually train dealers. In those days poker dealers usually came from other games in the casino, and often times were unable to keep up, or answer simple questions about the game because they didn’t know the answers. Drache saw to it that the dealers became properly trained and were able to deal with simple to moderate issues that arrived at the table during a tournament. Once again, a small change went a long way.

Drache would then take over as tournament director for the Golden Nugget, before being recruited by Steve Wynn, who was opening “The Mirage” – the biggest hotel on the strip at the time. Nowadays poker is popular in many hotels on the Las Vegas strip, but back then poker was hardly available there. Wynn entrusted Drache with nearly every single aspect of the poker room, including where to put it in the casino, and the recruitment of players to the game. The poker room was of course a smash hit, and in turn introduced poker to a brand new crowd of people, the people who only stayed on the strip when visiting Las Vegas.

Unfortunately Drache ran into some legal troubles in the early 80’s. Drache was prosecuted for the IRS for failure to pay taxes and as a result also lost his gaming license. Drache stepped away from the game he loved so much for over a decade, and moved to the Los Angeles area. There he got married and had two kids, and was content, but that’s when poker came calling back. Larry Flint, owner of the Hustler Casino not too far from where Drache lived at the time, had just opened a poker room and asked him to help. Like he did at The Mirage, he situated the poker room where he thought best, and also brought in many high stakes players to check out the new casino. Despite being out of the limelight for a decade, many of his old Vegas friends were happy to see him.

Since then, Drache has had his hand in a number of projects. Most notably have been NBC’s “National Heads-Up Challenge” and Game Show Network’s “High Stakes Poker.” This past November he made his return to the WSOP, this time as a producer for the Pay-Per-View coverage of the final table of the main event.

Drache is largely responsible for helping the game grow from a few men sitting around a table at the first few years of the WSOP, to millions of people playing poker daily both in casinos and online. He helped branch poker from downtown Las Vegas, where it was seen as a “seedy” game, to putting it right in the middle of the strip for everyone to see. Plus, his early rules he put in place as a tournament director continue to be used today. Not many people can say they changed an aspect of poker, and Drache changed many things, all in a positive manner – in particular as the inventor of the satellite tournament format. That’s why Drache was an easy pick to be inducted into the Pokerology.com Hall of Fame. 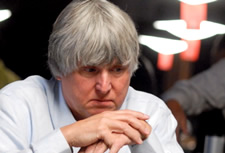 Not many people can say they changed an aspect of poker, and Drache changed many things, all in a positive manner.