Crossing the Line in Poker

Poker strategies continue to evolve but at a faster rate than they did back in the day. I believe that is simply the result of many more minds, based upon its ever increasing popularity, focused on its complexities than was previously the case. Online poker and its luxury of anonymity has helped fuel this transition. However, one of the earliest poker strategies or disciplines espoused by the pundits, which I learned decades ago, is as true now as it was back then. They advocated tight but aggressive play – selective aggression. I believe that is still the foundation of winning play.

We all know the tight part of the formula is focused to properly evaluating starting hand requirements by position. That one should have a decent starting hand to enter the fray – seems to make sense, don’t you think? The aggressive part of the formula seems to continue to grow in its ferocity and today we’ll discuss when it possibly crosses the line into recklessness. To be sure, each of us may define aggressiveness differently based upon our playing styles or even the mood de jour. Recklessness is easier to identify even though it is difficult to define. To paraphrase an American Supreme Court Justice’s line regarding a ruling on pornography, “I can’t really define it but I know it when I see it” seems to work for poker recklessness also.

Since playing aggressively is rooted in the age old adage of raisers are winners and callers are losers, let’s examine some caveats that should be embraced regarding aggressiveness to help us not become reckless. Position should probably head the list of caveats – utilize your position for best results. Respecting your opponent’s raises should certainly be on the list as well. Remember that your raises may well encourage others to raise or re-raise and they are not always responding to aggression with nothing! Have you ever, while holding second or even third pair, called a raise or two only to find out you were drawing to a two outer? That can occur when one believes his opponent is trying to bully him off his hand. Misinterpreting an opponent’s raise as a bullying tactic versus a value bet can be a slippery slope.

Crossing the line from aggressiveness into recklessness is many times caused by a lack of emotional control. How many times have you witnessed, or been a part of, a raising war that was based more on testosterone levels than on hand values? If you’ve been around the poker scene long enough, you will have seen an example or two of combative raising that seems to shout, “My #^*# is bigger than yours”! Don’t succumb to the visceral thrill of that activity because as sure as the sun is coming up tomorrow, one of those “maniacs” really has a hand.

As in all of poker, the value of learning your opponents’ tendencies is key to winning play. It will help you determine who should be raised and who shouldn’t and in what situations. Ratcheting up your aggressiveness and raising with marginal hand values against tight, timid rocks is spot on. However, loose raises against maniacs only increase your standard deviation as they will re-raise as opposed to the timid rocks. Of course, if you really have the goods they are most cooperative in helping you build a pot.

Another example of aggressive play, coupled with opponent knowledge, is attacking the blinds. Even if you believe both blinds are tighter than Ebenezer Scrooge, you should still throw your worst twenty five percent of starting hands away so that you may better disguise your larceny. If you try and hammer them every time around (crossing the line from aggressiveness to recklessness) even the tightest rocks and dimmest wits will understand and begin to play back at you.

I believe we should always be assessing our play for weaknesses in order to improve our game and therefore our results. Re-examine your aggressiveness and determine whether you’re spot on, playing like a wimp or have crossed the line into reckless territory. It should be an easy fix to make if required – if you determine you’ve grown a little too passive, then ratchet up the aggressiveness. If, on the other hand, you’ve grown accustomed to firing bullet after bullet and seem to be coming up short in the showdown department then maybe, just maybe, you need to think about crossing back over the line into saner territory.

It’s something to think about – remember this, if the shoe fits then buy another just like it!

4 Responses to “Crossing the Line in Poker” 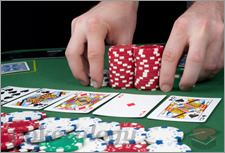 How many times have you witnessed, or been a part of, a raising war that was based more on testosterone levels than on hand values?