Chip Reese’s time on earth was unfortunately cut short, but while he was here he represented the game of poker with a passion and love for the game that will have a hard time ever being matched again. His physical contributions to the game may not amount to as much as some of the other players in the Pokerology Hall of Fame, however he left a positive impact on many of the best poker players of his time. In 1979 his best friend Doyle Brunson called him one of the two best poker players in the world, and this was not that long into Reese’s career. By the time he passed away he was considered by Brunson, among many, as the best cash game player in the history of poker. For most of his career Reese made the personal choice to stay out of the spotlight, but there is only so long you can be in hiding before poker fans realize how good of player you really are.

David Edward Reese was born March 28, 1951 in the small town of Centerville, Ohio. When he had just started school he came down with rheumatic fever, a type of inflammatory disease that sometimes arises after another illness such as strep throat. The illness kept Reese home from school for almost an entire year. His mom introduced Reese to a variety of games, including backgammon and bridge, but the game that stuck out most in young Reese’s mind was poker. When he returned to school the next year he was only six years old, but that did not keep him from playing poker against the fifth-graders. Instead of using money, Reese would use baseball cards, and by the time he was done with elementary school he’d built up a nice collection.

Education came first in the Reese household, so David worked hard and got a scholarship to Dartmouth University, one of the premier colleges in America. He even turned down an offer from Harvard. Reese majored in economics, which was a good thing because he knew what to do with all the money he was winning in poker games against his fellow students, and even professors. Reese left such an impression on Dartmouth they named a card room after him in later years. Despite excelling in poker, Reese decided he was going to go to law school and was accepted by Stanford Law, another premier school.

A funny thing happened on the way to Stanford. Literally, on his way to attend the school Reese stopped in Las Vegas. The $400 bankroll he brought with him was just to have a little fun, but by the end of the trip Reese had won a tournament for $60,000. Almost immediately after winning he decided that he would not be attending Stanford after all. Reese called his friends and family and told them he would be moving to Las Vegas, and he never moved again.

Reese excelled in seven card-stud, and in 1979 the biggest legend of the game, Doyle Brunson, asked if Reese would write the stud section of his book “Super System”. Being that Reese had only been in Las Vegas for a couple of years this was about the biggest honor as you could get. Reese of course accepted, and it was here that Brunson called him one of the best young poker players. Additionally, by this time Reese had earned his nickname “Chip,” because more often than not he ended up with all the chips on the table by the end of the night.

Reese always considered himself a cash game player first and never really fully enjoyed poker tournaments. Although that didn’t stop him from excelling in them too. Reese won three World Series of Poker bracelets, the first in 1978 for the $1,000 Seven-Card Stud-split event, garnering the attention of Brunson. The second came in the $5,000 Limit Seven Card Stud event in 1982, and his final bracelet came in 2006, in what is considered one of the greatest final tables of all time.

Reese took a long break from tournament action, but was compelled to return in 2004 when his kids started asking them why they did not see him on TV. In 2006 his kids would see him on TV at an epic final table that will be shown on television for as long as poker lives. It was the first year of the $50,000 buy-in H.O.R.S.E. Tournament. Some professionals had complained that “anyone” could win a bracelet now because of how many events the WSOP had grown to and they wanted an event that was just theirs. Reese made the tournament his when he outlasted eight of the biggest names in poker at the final table. Those with him at the final table in the order they finished were Andy Block, Phil Ivey, Jim Betchel, T.J. Cloutier, David Singer, Dewey Tomko, Brunson, and Patrick Antonious. The final table lasted over 12 hours, while the heads up battle alone lasted over seven hours.

More than 15 years before winning what most consider the toughest tournament ever, Reese was the youngest member ever elected to the Poker Hall of Fame. In 1991, at just 40 years old, Reese was entered into poker immortality.

Sadly on December 4, 2007 Reese passed away at his Las Vegas home after telling his family and friends he was suffering from pneumonia-like symptoms. Some of his friends, including Barry Greenstein, think the result of death may have been from a blood clot, due to gastric bypass surgery he’d had. Others think that it could even go way back to when he had rheumatic fever, as that illness has been known to cause heart valve defects. While we may never know the true cause of death we do know that Reese gave his all to poker while he was with us. As with anything, it is tough to speculate what could have been, but while he was here he showed what he was capable of in all forms of poker. It is our honor to enter Chip Reese into the inaugural class of the Pokerology Hall of Fame. 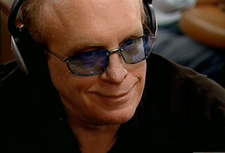 Reese had earned his nickname “Chip,” because more often than not he ended up with all the chips on the table by the end of the night.