Tournament Poker – To Cash or Not to Cash?

To cash or not to cash: that is the question:
Whether ‘tis nobler in the mind to suffer
The slings and arrows of outrageously bad beats
Or to take arms against a sea of donkey-fish
And by opposing bust them?
To die; to go broke;
No more; and by going broke to say we end
The heartache and thousand natural shocks
That comes with finishing on the bubble, ‘tis a consummation
Devoutly to be wish’d.

For those non-English-Literature majors among you, the famous passage I just mangled is Hamlet’s soliloquy from Act III, Scene I. In this scene, Hamlet is considering suicide, but can’t quite talk himself into doing the deed.

You may ask, “What in the holy Hell-muth does Hamlet have to do with poker?”

What, you didn’t know the Bard played in a regular game backstage with his actors at the Globe?

While neither I, nor anyone associated with Pokerology.com, would advocate suicide as a solution for anything, one facet of this famous speech can be of use at your next tournament. Hamlet believes that the fear of death “makes us rather bear those ills we have/Than fly to others we know not of”. In other words, “better the devil you know than the devil you don’t”. In order to be a successful tournament poker player, you can’t let that fear of the unknown enter into your decision-making process. When you have to make that all-in call, you can’t allow “the dread of something after death” to be a factor.

If the literary argument doesn’t persuade you, perhaps a mathematical one will. Let’s assume that you have a poker bankroll (or a very generous backer) so that you can enter a hundred poker tournaments, each with a $10,00 buy-in, for a total tournament bankroll of a million bucks. Let’s also assume, for the purposes of this discussion, that your best friend has the same bankroll and that you both enter the same poker tournaments. Just to make things interesting, you both decide to make a friendly wager on who wins the most money after you each play a hundred tournaments.

Your friend uses a very conservative tournament style; he only gets his money in with strong hands, rarely bluffs and generally plays not too lose early. He avoids getting involved in pots where his edge is marginal at best and he continuously makes what he considers smart laydowns to his opponent’s raises and re-raises. Over the course of the hundred tournaments, he makes the cash twenty times, twice as often as the average player. However, when he makes the cash, he almost always has a below-average stack and only makes one deep run, missing the final table by three spots. His final total is barely in the black, about twenty thousand dollars.

Your style, on the other hand, is much more aggressive. During the early blind levels, you put your opponents’ raises to the test. In one instance, after one of your reraises, your opponent shows his “excellent” laydown of pocket kings after you come over the top with (mucked) pocket jacks. When the ante levels start, you pounce on that dead money like a cat on a mouse. Once the tournament director announces that the money bubble is coming soon, you push the table around like a furniture mover.

With this level of aggression, though, will come more than your share of bad beats and dominated hands. You miss the money much more often than your friend. You may bust out in the first hour, the first day or right before the bubble. However, on those occasions when you do make the money, you’ll have enough chips to make deep runs and earn good shots to make the big money. Although you don’t make the money as often as your buddy Mr. Conservative, you make two final tables and take down one big win for nearly a million bucks. Your total earnings for the hundred-tournament span puts you at almost a half-million ahead.

How did you do so much better than your tight-as-a-drum friend? One word: variance. Many inexperienced players, and even some veteran pros, are so afraid to get their money in without a huge edge that they fail to take advantage of their smaller edges, thus passing up on some potentially profitable situations. In your case, you pushed your small edges and reaped the profits for it.

Another advantage to this style is that you force your more conservative opponents into situations that push them out of their comfort zone. Rather than “risk their tournament life” in a marginal situation, they choose to give up and wait for better cards, a table move, or a bolt of lightning to strike you down.

The downside to this style is also what makes it so useful. While such aggression can be very profitable in the long-term, the lengthy droughts and scattered bright spots can put even the best players on an emotional roller coaster. After you fail to cash in twenty, thirty or fifty tourneys in a row, you can lose faith in your game and question why you play poker; at that point, a measly twenty or thirty grand can look quite nice while the million-dollar first prize can seem as far away as the moon. Like a batter in a hitting slump or a golfer who can’t find the fairway, you’ll start tinkering with your style.

One thing to remember about poker tournaments is both the most obvious and most overlooked fact: he (or she) who ends up with all the chips, wins. Your objective in a poker tournament is not just to cash or even make the TV show, but to get every single chip on the table. As former NFL coach Herm Edwards once said, “You play to win the game!” To borrow once again from Shakespeare:

“Thus conscience does make cowards of us all;
And thus the native hue of resolution
Is sicklied o’er with the pale cast of thought,
And enterprises of great pith and moment
With this regard their currents turn awry,
And lose the name of action.”

And isn’t “the name of action” what poker is all about? 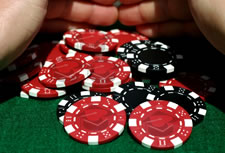 When the ante levels start, you pounce on that dead money like a cat on a mouse.