It is generally known that much deception is practiced at cards. Since a child I’ve had a keen interest in magic – sleight of hand in particular. You’ve no doubt heard the saying “the hand is quicker than the eye”, yet this is false. The hand is not quicker than the eye, it’s cleverer, and the key to any decent card trick is keeping complete control of the cards. Therefore the methods of cheating that I’ll be discussing in this article are mainly related to card manipulation, also known as ‘mechanics’.

I won’t be going into great detail about the card manipulation methods because this would be breaking the age old magician’s code. The reason for writing this article is that I believe it’s important to have an understanding of the potential card cheating methods employed in order to reduce the chances of being cheated. Anyone reading this who is thinking of using this information to cheat – don’t even think about it! It’s important to have morals and good ethics, and if this is beyond you then just consider that any rewards would be far outweighed by the huge risks of cheating.

Marked cards are also known as ‘readers’. Such cards can easily be identified by looking at the back of the card. Whilst it is possible to buy specially manufactured marked cards, the usual method would be for the card cheat to mark the cards themselves during a game. A whole deck of cards can easily be ‘doctored’ fairly quickly. Although most cheats would probably just mark the higher value cards. Since there is virtually no skill (except for avoiding attention) to marking cards it is an appealing cheating method for many cheats.

The cheat can mark cards in a variety of ways. The most common way of marking cards is by putting a nail mark into the card by squeezing the card between the thumb and forefinger. Other methods include crimping the corners, grease marks, dirt marks, etc. If you play a lot of live poker then you will probably have been involved in a game where cards have been marked. It doesn’t always mean that someone has attempted to cheat, as even the best playing cards can get marked naturally. But keep a close eye on the cards and if you spot a marked card then immediately request a new deck. If you’re not completely happy then leave the game.

To diminish the influence of marked cards you should always use ‘burn cards’ when you play poker. The great advantage is that the cheat would not know what the next card is from the deck. I would also suggest that the deck is kept square on the table and not spread out as some people prefer. If the deck is spread, even slightly, then the corners of the cards are exposed and it gives the card cheat an opportunity to see where the marked cards are. Some players also have a habit of discarding the burn card before the betting round has finished. If you see people doing this then politely tell them not to do it. It’s bad form!

This is a prearranged deck that the cheat would bring into the game at an opportune moment. The deck would have two or more hands already setup or ‘stacked’ and it would be ready for dealing. The cheat might also give the deck a false shuffle and then deal his winning hand. With a prepared deck the card cheat would ensure his victim has a very good hand, just not quite as good as his. Little skill is required in this method of cheating as the deck could have been prearranged hours before the game.

As you can imagine the ‘cold deck’ has limitations for the cheat. Therefore another cheating method is to ‘stack’ the deck during a seemingly legitimate shuffle. During this ‘shuffle’ the desired cards are shuffled into the correct location in the deck. Suppose it is a five handed game of poker; the shuffler/dealer has secured the two Aces at the top of the deck, he then proceeds to perform simple overhand shuffle. In this shuffle the card cheat has just separated the Aces by ‘running’ four cards between them. Now there is just one Ace on the top. Another quick overhand shuffle and the Aces are now laying 5th and 10th in the deck. The cards are dealt and hey presto the cheat has pocket Aces!

Contrary to what people would imagine, the card cheat is able to stack a deck very easily by using the overhand shuffle. This is because cards can be pulled off one at a time, breaks can be formed between packets, and the sequence can easily repeated. Such manipulation is far more difficult with the riffle shuffle technique.

Of course when it comes to card shuffling you should also be aware that the deck may already be prearranged. The whole deck doesn’t need to be but maybe just the top 10 or 15 cards. The card cheat will then ensure he doesn’t interrupt this part of the deck. This is called ‘top stock control’. This sort of stock control is also done with the riffle shuffle. It is pretty easy to spot as the shuffler will be attempting to avoid disturbing the top cards.

Cheating using the riffle shuffle is far more difficult. It’s still possible to do false shuffles using this method but to stack a deck requires considerable skill and years of practise. So the warning to you is be very wary when someone you have seen using the riffle shuffle, changes and starts using the overhand shuffle. People who shuffle with the riffle shuffle very rarely need to do an overhand shuffle. It should also be noted that the professional card cheat will never show off his skill at manipulation. This would be very stupid. The clever cheat would look clumsy so as not to arouse suspicion.

There are two main ways of dodgy dealing. The first is what is called ‘dealing seconds’. This is where the card cheat would have his desired card at the top of the deck. This card will remain on the top throughout the deal until it gets to his turn, at which point the top card is dealt. This is a difficult card sleight and even more difficult to detect if it is done properly. The card cheat will usually push the top card over very slightly, at which point the right thumb (if right handed) comes in and clips the second card out whilst the top card is simultaneously pulled back into position by the left thumb.

Of course the card cheat only has the advantage of dealing himself one desired card using this method. The far more effective crooked deal is the bottom deal. As you’ve probably guessed, the bottom deal means dealing from the bottom of the deck. This is extremely hard to master and you shouldn’t worry too much as very few people can perform the bottom deal without giving away tell tale signs.

The card cheat will in all probability be holding the deck in what is known as ‘the mechanics grip’. The middle finger then comes in and takes the bottom card from the deck. This is all done in a very fluid manner, assuming of course that the card cheat is a good manipulator. The biggest give away sign to the bottom deal is that ‘mechanics grip’. It is not a natural way to hold a deck of cards. Another give away is the noise made by the bottom card when it is dealt. If performed badly the bottom of the deck will also wedge out slightly. Watch out for these!

Of course you should always have a postilion (the plastic card) at the bottom of the deck when dealing. This makes it very difficult to perform a bottom deal. If you don’t have a postilion then use a joker card as a substitute. Please remember that it takes years of practise to achieve an effective bottom deal, and when you add the postilion to the equation it would require a true expert. So don’t worry too much about it.

When two or more card cheats work together the difficulty of their task is dramatically reduced. The chosen cards would be gathered before the shuffle (i.e. scooped from the last hand), secured, shuffled into the desired location, and then cut. If the rules of the game dictate that someone other than the shuffler is obliged to cut the cards, then the cheater’s accomplice will duly cut the deck at the desired location.

You may ask how the cheat knows where to cut the cards? One common method is for the 1st cheat to bend the deck then cut the deck themselves, but in the act of doing this cut the top half of the deck is bent backwards. The cut is completed and as the deck is on the table there is a clear arch between the top and bottom halves, which is where the 2nd cheat will cut. This brings the deck back to its original position. Whilst this method is fairly simple, the giveaway signs are easy to spot. If this method were employed then the cut would be done very quickly to avoid being caught.

Another method is for the 1st cheat to cut the deck but to out jog slightly. The 2nd cheat then just cuts at the point where the deck slightly overlaps. The deck is then setup for the deal with the cards in place. As you can imagine, when two or more people are involved in cheating it doesn’t have to be about card manipulation. There are many ways to cheat when collusion is involved and far too many to list here.

The following procedures should be common place in your poker game to help prevent cheating;

Seating - Players should draw cards to determine who sits where. You should never be able to just sit where you like as it increases the odds for the card cheats who are in collusion.

Use a Postilion - Always have a postilion or joker on the bottom of the deck. Not only does it stop the bottom card being glimpsed, but it helps prevent bottom dealing.

Count the Cards - At regular intervals the cards should be counted to ensure they are all present. If two Aces are missing, start worrying!

Check for Markings - Regularly check the cards for marks, crimps, etc. Of course some marks will be accidental but if this affects the game then get a new deck of cards.

Cards on the Table - Ensure that playing cards are kept on the table at all times. There is no reason why a player should have to remove the cards from the table.

Of course there are many methods of cheating in poker and I don’t claim to know all of them. I also don’t want you to think that card cheating happens all the time. It doesn’t. Playing poker live is great fun and you shouldn’t let what I’ve shared with you put you off. If you play poker in an environment that you’re comfortable with and are having fun, then don’t worry. However it is always wise to know the methods which could be used to cheat you and for this reason you should follow the procedures explained above. Anyway, I hope that you’ve enjoyed reading this!

* This updated article was originally written by Tim Ryerson on 3rd February 2005. 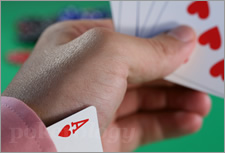 Anyone reading this who is thinking of using this information to cheat - don't even think about it!