For those of you who are fans of Phil Hellmuth, aka Poker Brat, aka Mr. Eleven Bracelets, aka The Greatest No-Limit Hold’Em Tournament Player Of All Time™, you’ll notice that he tends to be a bit tardy at the start of tournaments. Could it be that his alarm clock is perpetually ten minutes off? Could it be that, as ESPN broadcaster Norman Chad remarked, he’s waiting for the other contestants to acknowledge his presence in the room? Could it be that his late arrivals are truly a masterful stratagem that we mere poker mortals have yet to comprehend?

While it could be any one of these things, my vote goes to the last choice. Mr. Hellmuth is many things to many people: valiant but put-upon champion to himself, a pain in the gluteus maximus to most. However, he is definitely not naïve when it comes to poker strategy. How can showing up late be a beneficial poker strategy? Shouldn’t a poker player, like a good student or office worker, be at their assigned seat at the assigned time to do the assigned work? Not necessarily.

Here are a few reasons that it’s better to be late than early:

Most players, especially those who are playing in their first major poker tournament, like to show up early and find their seat right away. Once they take their seat and chat up the other players, anxious feelings may start creeping in. Since new players have so much time to kill before the first deal, they can inadvertently psych themselves out while they’re waiting. Latecomers don’t have time to worry themselves into a knot – they find their seat, sit down and get ready to play. From there, the game is their only focus, not their churning fears.

Another advantage to a late arrival is that some poker players may either be short stacked or completely eliminated by the time the latecomer shows up. Many online poker sites, including Full Tilt and Poker Stars, allow for players to register, buy in and sit down any time before the second blind level begins. In the case of tournaments with large entry fields, this can be beneficial as numerous players may be knocked out during the first level. In online multi-table satellite tournaments, where the emphasis is on survival rather than chip accumulation, late attendees will often find fewer players standing between them and the prize.

In a military operation, commanders often send a small band of troops forward to scout the enemy positions before an attack. These scout troops go on reconnaissance missions to gather data so that the commanders can make informed decisions as to when and how to hit their targets. In live poker tournaments, since the seating arrangements are pre-assigned, latecomers may benefit from doing some “recon” and gathering “intel” on their own. Wherever possible, these players can watch their opponents and gain valuable data on how they play through the first round. This way, the latecomer knows how his opponents play without giving away anything on his own playing style. Most online poker tournaments won’t deal the latecomer a hand until it’s their turn to post the big blind, which means they get to sit at the table, gather more “intel” on their opponents without either playing a single hand or risking a single chip!

Most poker books about no-limit hold’em tournament strategy teach readers that they should limit their starting hand selections to the top five to ten percent during the first few rounds. Three-time WSOP Main Event winner Stu Ungar was famous for barely playing a hand until the antes started, usually in the fourth or fifth level of a live poker tournament. Instead of feeling the frustration of wanting to play (and possibly getting in trouble with) marginal hands like Ace-Ten or pocket Sixes during the first level, latecomers sit out and wait for better opportunities.

When a latecomer arrives at a tournament table that is already underway, their presence creates a noticeable disturbance in the flow of play that was previously established. A new and unknown element has dropped into the game like a stone into a pond, its ripples destroying the smooth, placid surface of the game. Some players may go out of their way to chastise the newcomer for their lack of consideration or manners. For the latecomer, this artificially induced “tilt factor” creates a mental edge. While the newly-arrived player in thinking about their game and has already gained some knowledge about the other combatants, the rest of the table has to make adjustments and learn on the fly about this “rude” and “classless” player.

As the poker great T.J. Cloutier once said, “You can’t win a tournament on the first day, but you can damn sure lose one.” That same advice goes for the first round of a tournament as well, not just the first day. Some players may worry about missing opportunities to double up early or establishing a strong table image during the first round. Such players should keep in mind the statistic that, since the WSOP Main Event has been extended to a multi-day format, the leader after Day 1 has never won the tournament. As the blinds and antes increase, chip leads early will not get players as far as strong play late in the game. For those in need of a cautionary tale, I offer the infamous case of Oliver Hudson vs. Sammy Farha from the 2005 WSOP Main Event:

Almost every poker book teaches the advantage of late position: if you act last, you can see how your opponents play, then make your decisions based on their actions. A similar idea holds true for latecomers to the tournament itself. The latecomer can not only see how the playing styles of their tablemates, but can track the growing prize pool (in cash tournaments), the number of seats available (in satellite tournaments), and player eliminations before moving a single chip. These opportunities only help to confirm the old saying, “Better Late Than Never”. 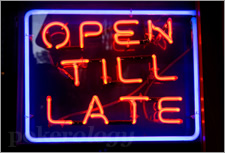 As the poker great T.J. Cloutier once said, “You can’t win a tournament on the first day, but you can damn sure lose one”