The Best Poker TV Shows Ever Made

Most poker fans will agree on the two major factors that contributed to the poker boom of recent years: online poker and TV poker shows. Not only has the customer base for online poker exploded in the last eight years, the sheer amount of TV poker content has also expanded. In a five-hundred-channel universe that must fill its voracious twenty-four hour programming schedule, poker shows have become nearly as omnipresent as late-night infomercials.

Here are some of the best US-based poker TV shows: 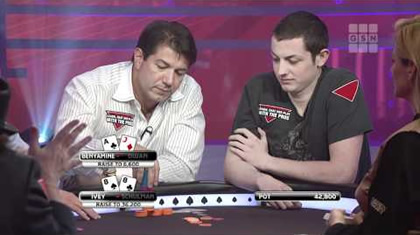 GSN’s “Doubles Poker Championship” is probably the most unique poker show on TV. Instead of playing against each other, players must cooperate as duos win a four-team single-table tournament. The format presents challenges for the player beyond reading a single opponent: each player must also understand his partner’s moves, as well as both members of the opposing teams.

The fun for the viewers often comes less from the stellar poker play the pros exhibit, but the clash in personalities among these strong characters. If Phil Hellmuth is a sore loser when he only has to depend on his own ability, imagine the meltdowns he has when a teammate lets him down.

The presentation style of “Poker After Dark” comes across much more as a high-stakes home game rather than a high-pressure winner-take-all tournament. Players are often looser and more given to table talk… at least according to Phil Hellmuth. Speaking of Hellmuth blowups, the clip above shows how the “Poker Brat” starts comparing the show to the “World Wide Wrestling Federation”.

The players take the game seriously (sometimes too much) and the commentary is insightful and educational. “PAD” is without question the best poker show on any of the major broadcast networks.

Over the last eight years, the World Poker Tour has been one of the pillars of TV poker programming. With a new tournament nearly every week, the WPT has produced more poker content than any other regular poker show. The graphics and presentation in each broadcast give the tournaments a dramatic feel, in spite of some of the corniest commentary seen this side of Norman Chad.

For the last few years, the show has been hopping networks. Starting at the Travel Channel in 2003, then moving to Game Show Network in 2007, and later to Fox Sports Net. The FSN format split each two-hour show into two one-hour episodes, making it harder to follow the action

The familiar guitar twang of the intro has carried the “Grandaddy of them All” from the run-down rooms of Binion’s on Fremont Street all the way to the spacious Amazon Room at the Rio. ESPN’s coverage of each year’s WSOP is still the measuring stick for every other TV poker show.

Despite the ratings decline in recent years and criticisms over the commentary (“I believe they are the ‘Ramblin’ Wreck’!”), the WSOP will remain the most popular TV poker show for the foreseeable future.

Although the WSOP has the glamour and prestige, GSN’s “High Stakes Poker” has the best in-game action of any poker TV show. The main difference between “High Stakes” and the other poker shows is that it shows real cash-game action, rather than a tournament. Players will often throw bundles of hundred-dollar bills in a pot along with their chips. The visual impact of seeing a player toss in enough cash to equal six months’ salary cannot be underestimated.

Of course, for every classic TV show, there are a dozen failures. Poker shows are no exception, especially ones that try to go “behind the scenes” or tell the “real story”. I’ll cover those in the follow-up to this article. 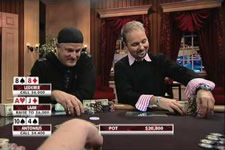 The visual impact of seeing a player toss in enough cash to equal six months’ salary cannot be underestimated.