The Best Poker Movies Ever Made

One of the great appeals of poker to a mass audience is the drama inherent in the game itself. Millions of dollars can change on the turn of a card. An unknown player can become a household name overnight. A player needs just one lucky card to make his dreams come true; the audience holds its breath in anticipation. Can he possibly beat the odds and make his hand?

If poker is inherently dramatic, why are there so few entertaining poker movies? Is it because Hollywood can’t translate the tension players feel, or is it that a group of men (and a few women) sitting around a table doesn’t produce the same visceral effects as giant fighting robots or magical teenagers?

In any event, some filmmakers were able to get the carry the feel of the game from the green felt to the silver screen.

Here are some of the best poker movies ever made:

Stu Ungar was the original “young gun” of tournament poker. In 1980, he was the youngest player to win the World Series of Poker Main Event, a record he would hold until Phil Hellmuth broke it nine years later. Ungar also holds one record that may never be broken: he was the only three-time Main Event Champion (1980, 1981, 1997).

Michael Imperioli (“Christopher Moltisanti” on “The Sopranos”) carries this movie on his back. His portrayal shows Ungar as both a genius at cards and a troubled soul in every other aspect of his life.

Putting aside the recent real-life drama surrounding its star, the “Maverick” movie with Mel Gibson was a fun, if completely unrealistic, portrait of the “gentleman gambler” from the 1960s TV show.

The final hand shown here is an example of Hollywood exaggerating the quality of most poker hands, as well as disregarding several modern rules. In today’s games, the two big slowrolls (Coburn’s quad eights and Gibson’s spade royal flush) would have earned the players reprimands from the dealer (and possibly beatings in the parking lot). The straight flush vs. royal flush ending is also ridiculous, but it’s all done with a tongue-in-cheek attitude.

While this classic movie may not display all the skills and strategies involved in the modern game, it does show the subtleties involved in the forgotten side of poker: cheating. Henry Gondorff (Paul Newman) knows that the only way to beat crime boss and poker cheat Doyle Lonnegan (Robert Shaw) at his private game is to out-cheat the cheater. Gondorff anticipates Lonnegan’s tendency to cheat with nines, brings his own rigged deck, and beats Lonnegan at his own game.

Another example of a “young gun” versus an old pro, “The Kid” (Steve McQueen) takes on “The Man” (Edward G. Robinson) in a classic game of Five Card Stud. With one card to come in the final hand, the two combatants engage in a staredown, with the interested spectators providing a running commentary. As The Man says at the end, “It’s about making the wrong move at the right time.”

“Rounders” provided the most realistic portrait of the underground New York poker scene years before many of its participants (including Poker Hall of Famers Erik Seidel and Dan Harrington) became famous. Today, online poker rooms are filled with “MikeMcD”s and “TeddyKGB”s, all seeking to capture the essence of this classic film.

In my next article I’ll be reviewing some of the worst poker movies ever made.

3 Responses to “The Best Poker Movies Ever Made” 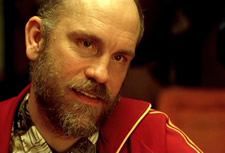 The straight flush vs. royal flush ending is also ridiculous, but it’s all done with a tongue-in-cheek attitude.