Playing poker live for the first time can be a nerve racking experience, and also a bit intimidating. The last thing you want to do is upset another player by doing things you shouldn’t, right? The purpose of this column is to offer some hints and tips on good poker etiquette and to make the introduction to live poker as smooth and enjoyable as possible.

I’ll assume that you already know the basic rules of poker and are comfortable with the mechanics of the game. But there are many more rules, regulations, and etiquette issues you should know before embarking on your first foray into live poker.

Don’t let anything in this column put you off playing live poker. Everyone was a novice at one stage and poker players are generally a friendly bunch who are welcoming to new players. If you explain you’re new to the game then nobody will expect you to be perfect, but the following points should help you integrate into the game without any unexpected bumps:

You’ve probably seen poker in the movies where they all say “I see you…and I’ll raise” – STOP! This is incorrect, and phrases like “I see you” are classed as a call, plain and simple. If you wish to make a raise then just say “raise”. Then make your bet. At some venues you might get away with this kind of sloppy table talk, but it’s a bad habit and one that should be eliminated early on.

Another very common verbal error that beginners to poker make is saying “raise”, when they are just making a bet. Don’t say raise when you mean bet. For example, after the flop the first to open the betting should say “bet” rather than “raise”. Even though there is money in the pot, they aren’t raising a new bet – they’re opening the betting. Saying “raise” should only occur when you’re actually increasing the bet and thereby raising someone else’s previous bet. Other players probably won’t say anything because it’s such a common occurrence, but a good one to avoid nonetheless. It won’t get you into trouble but saying raise when it’s just a bet is like holding up a big neon sign saying “I’m a poker novice”.

A string bet is when a player entering his chips into the pot as a bet or raise proceeds to move chips in multiple chip movement, such as dropping chips one at a time or going back to their chip stack to pick up more chips. The ruling for string bets varies from region to region, with some places being far stricter than others. Avoiding a habit for string betting is a good idea as it can prove to be a costly mistake. Here’s some advice – when you want to make a bet, put the chips in one smooth movement. Better still; verbally declare your bet amount before even touching your chips.

If you’re wondering why this is even at all important, then let me be clear about why string betting is frowned upon. String betting is not allowed because it opens up the possibility for cheating, by trying to gain a visual tell or response from another player in the pot. Other players will probably pull you up on string betting – so just be extra careful when making bets.

Here’s another betting situation that beginners to live poker often fail to understand – until it’s too late. If you don’t announce raise or call and throw one chip into the pot then it can be classed as a call. For example if it’s 100 to call and you place one 500 value chip across the line without declaring raise or call it’s usually only classed as a call. This is why it’s good to declare your action verbally before moving your chips. Just like with string betting, verbal declarations help cut out any potential mistakes.

In a few of the points mentioned so far, I’ve recommended making verbal declarations. I even said “verbal declarations help cut out any potential mistakes” – but they can also be costly, if made in error. You’ll often here poker players say “verbal goes”, and what they mean by this is – what you said first and foremost stands. If you say “call” and proceed to muck your cards, then your call stands and you have to put the chips in (you cards will be dead though in this example).

Make sure you’re up with the game (see #1) before making any verbal declarations. For example, if someone had made a raise before you and you thought there hadn’t been a raise, yet you announced call, then your call will stand. Sometimes this ruling is relaxed, especially for beginners, but it could cost you a lot of chips/money. So use verbal utterances with great care and concentrate on what’s occurred before it’s your turn, so you know exactly what you’re calling or raising.

The cards should remain on the table at all times. Sometimes new players like to hold the cards up towards their chest when sneaking a look – and most people won’t be too strict about this. It’s something beginners tend to do. However, your cards should be visible at all times. Do not hold your cards under the table or away from view. It’s quite obvious why this would be unacceptable, but I’ve seen many new players do this.

When your cards are on the table, avoid covering them with your hands. Other players should be able to see who is involved in the hand, and shouldn’t have to ask “do you still have cards?” If you want to protect your hand then just place a chip onto of them or buy a card protector.

When the time comes to fold (muck) your cards, then place them into the muck pile. A lot of new players will barely push their mucked cards forward. This can cause confusion, with other players unsure whether they’ve actually been folded. Avoid any potential confusion and properly muck your cards face down along with the other mucked cards.

Be careful and muck your cards properly. Don’t wildly throw your cards into the muck, because if you cards should miss their intended target and end up on an opponent’s hole cards, then their cards could be declared dead. They won’t be best pleased with you either! This is one reason why it’s a good idea to protect your cards (see previous point), should someone do the same to you.

#9 – Talking / Gesturing During a Hand

When a hand is in progress you should refrain from talking about the hand. General table talk is usually acceptable, but if things get serious then pipe down. If by chance you would have made a great hand, then don’t let the whole table know about it either. For example, you fold 7/2 pre-flop and the flop comes 772. Don’t thump the table, yell “Oh my god!” or shake your head profusely. Do this after the hand if needs be, but never during it. It indicates what you had to the other active players involved in the hand and is considered very poor etiquette.

If a hand enters a showdown (where cards are revealed) then you should show your hole cards as soon as possible, if you’ve been called. If your opponent has shown their cards first and you have a better hand, then reveal it immediately. Don’t let your opponent think they might have won the pot, then slowly turn over the nuts (best possible hand). This is known as “slow rolling” and is one of the main ways to upset people at the poker table. You want to win their chips, not upset them!

Playing poker live is great fun. I hope you’ve found this article useful, particularly if you’re interesting in playing live poker for the first time. If you’re playing in a casino or cardroom and are unsure or confused about any aspect of the game (such as the structure, blinds/antes) then just ask the dealer when you’re not involved in a hand, preferably upon sitting down. 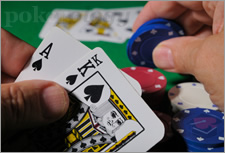 Don't let your opponent think they might have won the pot, then slowly turn over the nuts.