Most knowledgeable, seasoned poker players will agree that table selection is a critical element if one wishes to be a consistent winner on the green felt. Table selection is really defined as the ability to accurately assess the skill level of the seated players at a particular table. That and identifying the rhythm of the game which would best mesh with your approach. Assessing the skill level of seated players is most commonly accomplished by regulars being very familiar with other regulars in their favorite card emporium. But how would one go about understanding the skill levels of strangers if you’re playing in a venue for the very first time and are not familiar with any of the other players?

We’ve all heard the old adage: “If after the first half hour of play, you can’t pick out the sucker at the table, then it’s you!” To assure ourselves that will not be the case, we need to put our observation skills to work and begin assessing the strengths and weaknesses of each player at the poker table. Studying your opponents is critical to winning play and will do a lot more than guide you in decisions by understanding their individual tendencies. It will also tell you if you should be staying in a particular game or moving along to find something softer. Personally, if I can’t prove to myself through the observation of mistakes being made by my opponents that I’m seated in an exploitable game, then I begin to look for a table change. Why would anyone want to play against opponents who do not make mistakes? Exploiting your opponents’ mistakes is where your profit comes from!

What specifically should you be looking for to begin the process of assessing the competition? The first order of business is to get your head into the game and forget the ballgame on TV, forget telling the latest joke you just heard and forget flirting with the cute cocktail waitress. Those distractions prevent you from what your main objective is, which is getting down to work and studying your opponents. Watch all hands at the showdown to determine who is playing what kind of hand from what position and how. Did they raise, check-raise, limp in, or just check and call all the way to the river? Determine which players tend to get out of line, which ones are not raising when they clearly should be or are weak/tight calling stations. Pay particular attention to the betting patterns to determine which players like to slow play, try to isolate another opponent, push under pairs, defend their blinds religiously, will cold call raises and who will regularly fold to a raise unless they possess the nuts. Sounds like work? Sure it is – but why are you in this game? If it is to have some fun, maybe blow a few bucks or maybe get lucky and win a few bucks, then maybe it is too much work. Hey, there is a legion of recreational players to whom profit is not the main objective. There is nothing wrong if that is the group you fall into. However, if you’re involved to turn a profit and do so on a regular basis, then don’t consider it work but make it second nature as it must be done.

If, after closely assessing your competition, you cannot honestly say to yourself that you can identify with actual examples, that at least twenty percent of the table is well below your level of understanding of the game and therefore, less skillful, then it might be time to move along. If you make this kind of assessment part of your regular regimen then you should always be playing in games in which you have an edge. There is another old adage that would support the need for this type of in depth analysis of your opponents. There are two ways of winning consistently at the poker table. One is by one’s own brilliance and the other is through the mistakes of your opponents. The latter is the more reliable. If, after several laps around the table, you cannot identify any specific mistakes being made by any of your opponents – then maybe you are the sucker! Don’t delude yourself into thinking that you’re just as good as all the other poker players because, even if that’s true, you’ll need better cards to win. What you really need to win is an edge and that edge comes from your superior play coupled with your opponent’s mistakes. If you can’t prove to yourself through specific examples that you have an edge, then you should move on down the road.

So far we’ve talked about assessing the other players who were seated when you arrived. What if a new player joins the game once you believe you’ve got a pretty good bead on each of your opponents? The first mistake some players make regarding a new, fresh face in their regular surroundings is that they assume the new player must not be a very experienced or knowledgeable player. The second mistake is to quickly place the new player on a particular spot on the knowledge/experience curve by some preconceived notion of a stereotype based upon how that player is dressed, what jewelry is being worn, or to which gender, ethnic or age group he/she belongs. I believe these assumptions are nonsense. Instead of making wild assumptions, you should begin collecting evidence.

There are some things to take notice of before you begin to assess the new player’s actual perceived playing skill. Poker tells come in many forms, so observe the manner in which he buys in and for how much. A short buy or a full rack or more? Watch how the chips are handled which can speak volumes as to how much time has been spent around the game. Of course, chip dexterity alone should not be an indicator of an opponent’s skill. I’ve seen players who could riffle two stacks of ten chips perfectly but couldn’t play a lick! You should also observe how this new player elects to post relative to the button’s position. If he can’t wait patiently for several hands to enter at a more optimum time, what does that say about his discipline relative to starting hand requirements? Once he has been dealt a hand, observe how he handles his cards and when he actually looks at them, which is a solid indicator of how much experience he possesses. One should be observing his opponents’ possible reactions to their cards not missing that opportunity by focusing to his own cards. This leads me to my favorite test of a good player. Watch his eyes – what is he watching? Is he just focusing to his own cards or is he watching the other players? Watching what another player watches is a great indicator of his level of poker awareness.

The days of assuming a new face is just a mere “tourist” who has, until this very moment, only played for matchsticks on the kitchen table are over. Poker has exploded everywhere and some very competent players come from everywhere as well. They also come in all sizes, ages, genders and walks of life, so don’t make silly assumptions. Don’t make the mistake of assuming that new face is a fish to be taken advantage of, only to find out he’s really a shark who has swallowed your stack.

You need to constantly assess your competition so you understand where you stand in the line-up. If you determine that you’re not a favorite to take down the money, don’t fall victim to “chair glue” but rather get up and find a softer, more profitable game. Work hard to assess your competition and you’ll find the process will become second nature and it will definitely have a positive impact on your bottom line. These tips were obviously aimed at live game play. Assessing your online poker opponents is more difficult but there are many other tools which are available and I will leave their review to other Pokerology.com contributors to evaluate. The way I view it – it’s your money and if it isn’t worth your best effort to defend it and increase the odds of adding more to it, that’s your business. Shuffle up and deal! 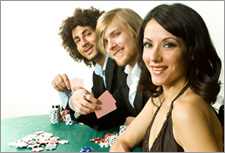 The first order of business is to get your head into the game and forget the ballgame on the TV.