Hi, my name is Tom Leonard and my poker nickname is “TIME” and to make a long and involved story short, here is how it became my moniker. Years and years ago when I was trying to improve my play, I used to think about all the variables when the action was on me and would call for time. Calling for time used to bug one of my home game buddies and he dubbed me with the moniker of “TIME” and it stuck. The reason I felt compelled to share the genesis of my nickname is because in this tale many names will be used and they are all “monikers” so you may recognize some.

Last week I played a slightly bizarre hold’em session at my all time favorite cardroom, Timmy Magic’s Poker Palace. All the current regulars were there along with some regulars of yesteryear who had drifted away. As I settled into my seat I looked around the table and received nods and smiles of greeting and recognition from a formidable group of opponents which gave me pause as I thought, hey table selection is critical so why am I sitting with all these great players? The smiling faces included Queso, RyckyRych, TheCol, DangerMouse, EddieRich, Dave Sparrow along with some players I hadn’t seen in quite a while such as mattjacknine, Patrick ‘paddyjim’ and holdemm1. I almost started to get up to leave such a tough lineup when my ego, which I sometimes refer to as just plain stupidity, got the best of me and I rationalized that it would be fun to hand out some good old fashioned whup ass to this crew of degenerate gamblers.

The game was pleasant and peaceful for quite some time with nobody stepping out of line. Everyone seemed content to play ABC poker and have an enjoyable session just passing small amounts of chips back and forth to each other. I scanned this motley crew and knew that as nice as the surface ambiance was, there was a fair amount of testosterone bubbling below the façade of smiling faces. Something special was bound to happen. True to my read I didn’t have to wait much longer as the following hand unfolded.

Queso brought it in with a raise four times the big blind from early position and everyone folded to me on the button so I made it ten times the big blind. Everyone folds back to Queso who sat there with a goofy grin and says, “So whatcha got TIME?” I give him an even goofier grin in return and say, “Position.” Now I can just read Queso’s mind which is blinking “WTF?“, which we all know means, what the fudge. No shrinking violet, Queso eyes my stack, knows I have him covered and pushes all-in. I insta call and Queso proudly flips up his red pocket rockets as his goofy grin morphs into a smug sneer. “Always got the goods, don’t you Queso?”, I state as I show him the two black aces. “Wanna chop right now or go for the flush” I ask. Queso smiles and indicates that we should run them. The dealer burns and the flop is three spades. “OK, let’s chop” says Queso. “Too late for that”, I counter. The dealer burns and the turn is a club which makes Queso flinch just from the color. I am enjoying myself immensely as I watch Queso squirm as I ride my freeroll. The river is delivered and is a big, fat heart much to Queso’s relief. Now I give him my goofiest grin yet and say, “OK, let’s chop.”

The next hand puts RyckyRych in the spot light as he limps in from early position only to be raised by malfunctioning who is reraised by holdemm1. The action is back on Rycky who has both players covered and he pushes. He gets two callers who are both holding Big Slick. Rycky is holding a pair of queens and hits his set on the flop which sends both malfunctioning and holdemm1 to the rail. Rycky, ever the sport calls after both of them, “We call that a double play down in Florida … now you guys will have as much time on your hands as Queso.” Queso glances menacingly at Rycky and treats him to a scary scowl. Before either vacated chair cushion has time to even cool a new player plops down. His name is Svengali. Everyone has heard about this master of the paste boards but he is somewhat of an enigma. He’s wearing a cowboy hat and mirrored sun glasses so no one can see his eyes. Svengali gives an almost imperceptible nod to the table and the game resumes.

The very next hand finds yours truly up against TheCol who is holding pocket jacks. Of course, yours truly has pocket queens. Neither hand improves and TheCol flings his losing hand into the muck while in a shrill voice shouting, “TIME, you’re one incredible luckbox! How did you know I didn’t have kings or aces?” I calmly smile and in a soothing voice say, “Col … all you paid was the looking price, lessons are extra.” That seems to have the desired effect as I can actually see smoke seeping from TheCol’s ears. I could be wrong but I also think I hear the faint sound of teeth grinding. It’s always a pleasure to put an opponent in a positive mind set!

The mysterious new player, Svengali, has not even played a pot as yet and we’ll all thinking that maybe he’s just a nit. I lean over to DangerMouse and say “Maybe this dude’s name should be Svennitty.” Danger chuckles and I think the Sven dude may have heard me because Danger and I catch a stony glare. Danger, EddieRich and mattjacknine get into a three way testosterone fueled raise fest with Danger dragging a nice pot with tens full. As he’s dragging the pot he is the lucky recipient of another glower from Svengali. What is up with this guy? I try and break the somber mood and call over to Svengali, “What’s up dude? How’s it hanging?” I don’t even get a glare. The man must have ice water in his veins … or maybe a light ale!

After not having even played a hand since his arrival, Svengali gets into a three way mixup with Queso and me. The flop is the beautiful sight of the king, queen and jack of spades. I’m holding the ace of spades and the king of hearts so I’m as happy as a liquored up freeroll whore. I check and get two checks in response and internally groan that I should have gotten some money in the pot. The turn is the beautiful king of diamonds. I now have top set and the nut flush draw and lead out with a pot size bet and am called by Queso and the mysterious Svengali. The river is the king of clubs and I am quite proud of the fact that I don’t jump out of my chair and scream BINGO! The master of self control that I am, I push the balance of my stack toward the pot anticipating the effect my quads will have on my foes. Svengali sneers (he really must have some anger issues) as he folds and Queso has me covered and insta calls. I show him my quad kings and begin to reach for the pot as he smirks and rolls over the ace and ten of spades for a royal flush. I’m sitting there stunned as Svengali points out that we both have an ace of spades in our hands. All hell breaks out and once a floor man is called he announces that the deck is fouled and the dealer redistributes the pot. Queso is so emotionally drained that the floor man takes pity on him and even though his royal was thrown out he is awarded a windbreaker from Timmy Magic’s Poker Palace.

Queso’s emotions went from the euphoria of Hero to Zero and then back to Hero. He immediately donned his new windbreaker and informed the table that he was through for the day. He strutted off proud as a peacock in his new windbreaker mumbling something about needing to take some new pictures. I called it day too vowing to unravel the riddle that shrouds the mysterious Svengali in a future session.

Author’s note: The selection of players in this Pokerology Tale were determined by the number of their posts on the poker forum. If any readers would one day like to be immortalized in a sequel, they need to become more active on the forum.

One Response to “A Pokerology Tale” 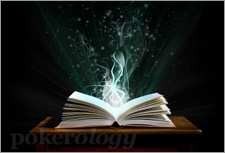 Everyone has heard about this master of the paste boards but he is somewhat of an enigma.