Poker and the Value of Position

Position refers to the order in which you act in a poker game. Your position in the betting order is critically important in Texas hold’em, and more important in no-limit than in fixed-limit or pot-limit games. By acting after your opponents, you have some critical information about the real or purported strength of their hands, while they have to act without any idea at all about what you might do when it’s your turn to act.

Position and Your Starting Hands

Your position is very important in determining the kinds of hands you can play before the flop. While big pairs have immediate impact, and a pocket pair of Queens, Kings, or Aces is probably the best hand prior to the flop and if it is, it stands a very good chance of still being the best hand once the flop is revealed, other hands have very different characteristics.

If you are holding

and are in early position, what should you do? This is the kind of hand that in all likelihood won’t stand much of a chance of surviving the flop. If it doesn’t connect with the flop, the hand will probably have to be released to an opponent’s bet. But if you get lucky with this hand by flopping a straight or a flush, or even a draw to one of these hands, you stand a chance of building a very strong hand. Unfortunately, you won’t stumble into a good flop all that often. A mid-range suited connector hand, such as

is best played against a large field when you can see the flop inexpensively. If you make a big hand you’ll have some customers who will presumably pay you off, but if you don’t connect with the flop, the cost to have tried to build a big hand was minimal.

In other words, this kind of hand plays best from late position, where you get to decide what to do after most of your opponents have acted. If there’s a raise before it’s your turn to act, you can just toss the hand away; if you have a gaggle of opponents, go ahead and call – and if no one has entered the pot you can even open with a raise in hopes of stealing the pot right there.

Even the best poker players find certain hands very tough to play from early position, such as suited connectors or small pocket pairs. When you’re out of position you have no idea what your opponents might do, or how many others will contest the pot with you. If you call and are raised, you can be certain that your opponent’s hand is stronger than yours, and unless the flop hits you hard, you’ll probably have to fold to a bet. This makes the hand more costly to play, and even if you play, you are forced to act first on each betting round. If you bet, you might be raised. If you don’t catch much of anything and check, your opponent will probably bet and you’ll have to guess about the quality of his hand, which means you’ll probably fold on the flop.

The Benefit of Position Post-Flop

We have already ascertained that the main benefit of having position is being able to see how everyone else is going to act and then making your decision as to the best play. This advantage is magnified after the flop. For example, if it checks to you, you can bet and often win the pot. If you have middle pair or even top pair and there is lots of betting action before it is your turn, you can confidently fold your hand without risking any chips.

Let’s use an example hand to demonstrate the benefit of acting last. We’ll use a scenario from a no-limit hold’em tournament, although the point we’ll be illustrating is applicable to any form of hold’em:

, which is certainly playable in this position. There is a case for raising, but in this example you decide to just call and evaluate the flop. The flop is

What should you do? Well, you can easily fold this hand. Yes, I know you have top pair with the best kicker. But in poker you have to think about what they have before you think about what you have.This type of flop and this much action means there are too many hand combinations that have you beat. There are several two pair combinations, sets or even the possibility someone flopped a straight. Even if you thought your Ace would make you two pair, the Ace of hearts would make someone else a flush. Because you are in position this is a clear fold and you lost the least amount of chips possible. If you were first to act, you might have lost chips by betting to find out where you stood.

Suppose you raised pre-flop from late position and received one caller. Your opponent, who is forced to act first, checks into a flop of

. You can bet, and if you do, you’re representing at least a pair of Jacks or Queens.  You might have a big pair or you might not (notice that we haven’t mentioned your actual cards), and while a skilled opponent knows there’s probably more of a chance that you don’t have a pair than you do based on the mathematical probability associated with the number of cards in the deck and the percentage of those cards that will help you, he has a tough decision. Because you’ve shown aggression and bet, he has to at least consider the possibility that you have a big hand.

A big hand is even more likely since you raised before the flop. Since most players raise with big pairs and high cards, your opponent has narrowed down the range of cards you might be holding, and figuring you for a pair of Jacks, Queens, or better is a strong possibility.

Because of that, even if he figures there’s a good chance that you’re bluffing, he really cannot call if he can’t beat the hand you represent.  He can fold.  He might even raise, and by doing so he’s representing an even bigger hand than you were, but he cannot call. Chances are he’ll fold.

The above scenario occurs frequently in hold’em. It’s a clear example of the benefit of acting last. Of course, you can fire out a bet when you’re first to act, but by acting after your opponent, you have some critical information about the real or purported strength of his hand. When you sense weakness you can bet, which gives him a tough decisions to make, knowing that he has to act first on subsequent betting rounds.

Position is a fundamental concept in poker and hopefully this lesson has introduced you to the value of acting last in the betting order. Position is a critical factor and when you possess it, all things become easier.

Always consider your position before contemplating whether to enter a pot. Your position should heavily influence the starting hands you play. Big pocket pairs that have immediate value and can be played from any position. But speculative hands that have potential but need to be helped by the flop to gain value, should be played primarily from late position, and only when at a bargain price.

Having position and using it with aggressive play is a powerful force in hold’em, especially in no-limit. Skilled poker players wield their position like a club and have a wide variety of plays to choose from – which we’ll examine in later lessons. Indeed, some of the largest gains in improving your game will come from increasing confidence playing position. 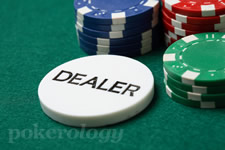 Position is a critical factor and when you possess it, all things become easier.