More and more in today’s poker, aggression is the key. This is particularly true in tournament play. The best poker players know how to pick their spots and are great at sensing weakness. One aggressive play that should be in everyone’s arsenal is the re-raise (also known as a re-steal). We will use the two terms interchangeably, but this poker lesson will focus on situations when the goal of re-raising pre-flop is to get the other player to fold.

The first step in learning the power of the re-raise is to be able to recognize situations in which the re-steal is more likely to be effective and profitable over the long run. Sure, there are times when you re-raise and the guy wakes up with Aces, but you have to take that chance sometimes to win a poker tournament.

Plain and simple, there must either be enough chips in the pot to make the risk of re-raising profitable or your stack in relation to the binds must dictate that you are in a situation that you need to take risks. For example, if the blinds are 10/20, you and your opponent both have 1500 and he raises from the button to 60, there is little value in re-stealing here and he’s not as likely to fold.

Stage of the Tournament

Bubbles are the best time to re-steal in poker because people are less likely to take big risks that might cost them their tournament life. This could be the money bubble stage, the final table bubble or near any significant jump in pay.

If stacks are deep and there are enough chips in the pot to make re-raising worth it, you can re-steal and have two ways to win:

If there’s a chance your opponent will call, you are much better off re-stealing from the button or cut-off so that you have position after the flop.

Caution – make sure you’re deep stacked enough in order to re-steal effectively without pushing all-in pre-flop. If you are mid-stacked it’s easy to commit yourself in an awkward flop situation. If you are somewhat short stacked, the best re-steal is to push all-in. Depending on how much fold equity you have (see below), this can put a lot of pressure on your opponent. Re-steals tend to be more effective and valuable during the late stages of a tournament since stacks are shorter on average and pots contain more blinds and antes.

Assuming your re-steal is pushing all-in, it is best to do this when you are not going to give your opponent the correct odds to call. Most conventional advice says that if you are getting around 2-1 you have the odds to call with almost any two cards. It doesn’t always make it a correct call, but since many people use this as a guide you should start looking for re-steal opportunities around 7-10M (M = your stack divided by the size of the pot pre-flop). Depending on their stack size, by giving incorrect odds to call you are increasing the amount of fold equity you have.

Damage to the Other Player

When looking for profitable re-steal situations you must consider your opponent’s stack size. Generally you want to avoid re-stealing into a huge stack because they have the chips to gamble with. At the same time, you don’t want to re-steal into a short stack who may feel desperate. The best stacks to re-steal against are the ones who you can do damage to if they called and lost. If you have 15,000 and your opponent has 22,000 with blinds at 500/1000 they are going to risk dropping down to 7BB. Even if they have a hand that is possibly ahead of your range, they will often still fold because they can pick a better spot to risk their chips.

Have they been stealing a lot, are they capable of folding to a re-raise, are they willing to gamble, are they a new player who overvalues their hand? These are some of the questions you have to ask yourself. Generally, re-steals are the most effective against loose aggressive players who know how to let go of a hand. By shoving into them, you are taking away their play and they will likely pick another spot. But pay close attention to who you are re-stealing from. Because re-steals have become more prominent, people are loosening their calling re-requirements. Where it used to be common place for someone to fold AT to a re-raise, some people are now insta-calling with this hand.

The main question to ask yourself is “what hand range will they put me on based on how I’ve been playing?” If you have re-stolen the last 3 times you were in the blinds, you are probably going to be called by someone who decides to look you up. If you’ve been playing like a rock, you could probably re-steal with any two cards and someone will fold AQ to you.

The most popular positions to re-steal from are the blinds because people will often raise with any two cards from the late position. While these are still effective, an often more believable re-steal position is from the button. Since a late position player may be stealing with a marginal hand, a button push is still effective against his range. In fact, a re-raise from the button looks much more believable that you have a very strong hand and will get the blinds and your opponent to fold a decent hand such as a mid pocket pair or AJ.

Notice we are waiting until now to talk about your cards. That’s because these should be the last thing you think about when determining if the situation is right for a re-steal. Ideally, you will want to have live cards to re-steal with in case you do get called. A hand like

is still only a 40% underdog against two over cards. When you factor that, along with the % of time they will fold, it makes the re-steal profitable.

Be careful re-stealing with hands like KQ or A-rag because if you do get called you are likely a 25-30% underdog. Obviously, if you have a hand that you feel is the favourite pre-flop you aren’t necessarily “stealing”. A shove might still be the correct play, but it’s more of a shove for value than for fold equity.

The following hand example is from the money bubble stage of a no-limit hold’em tournament. It folds to your opponent in the cut-off who raises to 3,000. You are in the small blind with

Your opponent is an experienced loose aggressive player. While he isn’t in every pot, you can be assured that if it folds to him in late position he is going to be raising. Your image is pretty solid. You haven’t been involved in too many pots and you have shown down good hands the last few that you have won. The big blind in the hand is a new, but very tight player who keeps commenting about making the money.

Should you fold, call or raise? Well, the worst play is to call. You are out of position with a marginal hand against an aggressive player. Unless you hit the flop perfectly, you are going to have to let the hand go.

There is nothing wrong with a fold here, but given the table image of each player still in the hand, the stage of the tournament and the stack sizes involved, I would re-steal and shove all-in. You will be giving your opponent 1.5-1 (23,900 in the pot and 15,400 to call), which makes it mathematically incorrect to call and he’s experienced enough to know that. Your stack can also do a lot of damage since it would leave your opponent with 7,500 if he lost.

If for some reason the big blind or your opponent wakes up with a hand, you are still not that big of an underdog. Regardless, the likelihood of them folding in this situation is very high and makes it move with positive expected value. You shove, the big blind folds

and your opponent folds

Strategies for Playing Against a Re-Steal

Since more and more players are utilizing the re-steal in their bag of tricks, you have to be observant and watch who may be using this technique and adjust your play. Here are some ways to counteract its effects:

Randomize your play by limping in late position

If you normally raise in late position when it folds to you and are now limping, this could freeze the action and cause the other players to be suspicious and worry you might have a monster. Since there are fewer chips in the pot to win, it also reduces their likelihood to raise from the blinds and you will have position on the flop.

Open up your calling requirements

Depending on your opponents’ propensity to re-steal, your stack size and need to gamble; you can make the call of a re-steal with a hand like AJ, KQ or a mid pocket pair and be confident that you are ahead.

Steal more from early position rather than late

Button steals have become so common place that many players automatically assume it’s a steal. But if you are stealing from an early position, it puts a lot more pressure on the other players because they are going to give you credit for a good hand.

If you pick up AA or KK in late position, consider raising larger or smaller than normal depending on what you think the re-stealer will think of your size (if you typically randomize your raise sizes). If you always raise the same amount, then just stick with that since any variation might look suspicious.

Reduce the size of your pre-flop raise

Instead of raising 3-4 times the big blind, start raising 2.25-2.75. These raise sizes are just as effective late in a tournament and reduce the amount you lose if someone does decide to come over the top.

This brings our lesson on re-stealing to a close. Hopefully you’ve picked up a few tips that will help you in future poker tournaments. Just remember that the best poker players know how to pick their spots and are great at sensing weakness – which is what you should be doing too. 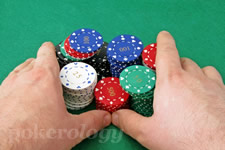 The best stacks to re-steal against are the ones who you can do damage to if they called and lost.