The flop is a defining moment in the play of a hand of hold’em. It’s the point when you know 71 percent of your final hand, and your hand has truly been defined. The second main point to realize is that the flop doesn’t “hit” anyone most of the time. With this in mind, the flop is when you start to play poker versus just playing cards. Here is a quick check list that should be automatically zipping through your mind:

The last point cuts right to the essence of poker. There is an old adage that sums up this point well. “Aside from cheating, there are two ways of winning at poker consistently. One is by one’s own brilliance and the other is through the mistakes of opponents. The latter is the more reliable!” Let’s take a look at each of the points on this check list.

If you are a skilled poker player and have invested in seeing the flop, then you’re either in good position or have a premium hand. If you find yourself out of position with a marginal holding, your best course of action is to go back to our earlier lessons and re-read them. Remember that poker is much easier when you have the benefit of position – and this is particularly true for no-limit hold’em. The positional consideration you should be addressing is your position in relation to a pre-flop aggressor. Taking this last point one step further – if you’re still in to see the flop, most of the time that pre-flop aggressor should have been you!

This point needs to be viewed in concert with what you believe are your opponents’ likely holdings. A flop’s texture is free information and is highly valuable. You need to be asking yourself; how does the board interact with what I believe are the likely starting hands of my opponents? While stated earlier that more times than not the flop doesn’t hit anyone, the texture will tell you if there are draws out there that should command your attention. Those draws are the open end straight or flush draws. Don’t worry too much about back door, runner/runner draws as, although they happen, they are not the primary holdings of better players.

The key ingredient is to know your opponents and something that has been stressed throughout the poker lessons on Pokerology is how important it is to be observant of your opponents and to figure out their strengths, weaknesses and playing tendencies. This knowledge is critical and you should always pay attention to understand your opponents’ approach to the game. This knowledge also needs to be tempered by their current state of mind. Are they winning or losing? Are they tilting or in control?

What is Your Plan?

Always remember, there is no shame in folding. More money is lost by competent poker players due to their egos not permitting them to understand that tenet. It has been said that most people don’t plan to fail, however, many fail to plan. If you are not thinking of how to proceed in a particular hand in this manner you really need to start if you aspire to becoming a stronger, more consistent winning player. In large measure this becomes the psychology of the game.

Upon assessing the texture of the board, knowledge of your opponents in the hand and your position, you can begin to formulate a plan. Remember to always have a reason for your actions. Let’s discuss some of the betting strategies and tactics that you might consider:

Make sure your bet tells an accurate story. For example, you raise in the cut-off position and the big blind calls and checks a flop of

. If you had an Ace, how much would you bet knowing those draws are out there? If you only bet 1/3 of the pot, is it believable that you have an ace? Probably not. Most continuation bets should be around ½ to 2/3 of the pot, but there are several factors such as the flop texture, table image and stack sizes that you should take into effect in addition to the story you are telling.

The number of players who called your pre-flop raise is also a major factor that will determine if you should continuation bet or not. As a good rule of thumb, you should never bluff the flop against three other players. In fact, you should also be cautious when deciding to bluff into two other players, depending on the other factors involved in the hand.

There are going to be times when you’re the one facing a continuation bet from a pre-flop aggressor. You will need to react to this based on your own holding as well as your gut feeling as to his holding and tendencies. A popular strategy to counter continuation bets is known as the float play. Floating the flop is a play wherein you feel certain you don’t hold the best hand but call a continuation bet made by a pre-flop raiser with the intention of taking the pot with a bet or raise on a perceived harmless turn card. If your opponent was being aggressive with just two over-cards it becomes very difficult for him to now call your new aggression in the hand. Be aware that this strategy is best used when you’re in position.

A probe bet refers to a bet made into a pre-flop raiser. Let’s say you call a raise from the big blind with

. Many poker authors used to recommend putting out a probe-bet or a “feeler bet” – about ½ the size of the pot to gain information about the strength of your hand. While this isn’t necessarily wrong, the game of poker has evolved over the last few years and a good aggressive player will tell you exactly what the strength of your hand is by raising your probe bet on a bluff. If you have a good read on your opponent and know he is a more conservative player, you can still probe bet profitably since they will likely not raise you without a better hand.

These days it is often better to check-raise to define the strength of your opponents hand rather than bet and be put to a decision. While this can yield more accurate information about your hand in relation to your opponents, the down side is that it is more expensive. However, the check-raise also represents a very strong hand so it can be a very powerful move to bluff with, especially if you feel like your opponent will almost always continuation bet.

The flop is a defining moment in no-limit hold’em. In this lesson we’ve discussed some of the main factors that you need to consider, such as your position, the texture of the flop and your opponents’ playing tendencies. Always consider these factors when forumlating your plan for the flop.

At the beginning of this lesson we used a well worn aphorism which highlighted the fact that, for the most part, your poker profit comes from your opponents’ mistakes not your own brilliance. Your goal at the poker table should be to help your opponents commit errors. We’ve touched on a few of the plays that can accomplish this goal such as the continuation bet, floating the flop, probe bets and check-raising. Know your opponents to know which tactics to use against them. 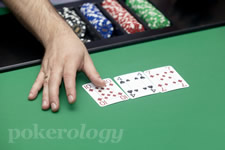 Upon assessing the texture of the board, knowledge of your opponents in the hand and your position, you can begin to formulate a plan.