As poker tactics have become more aggressive, the need to adapt your play in order to stay ahead of the curve has increased. While continuation betting is not a new concept, it has become used much more frequently than in years past and you need plays in your arsenal to combat it. One of those is the “Float Play”.

For the purpose of this poker lesson we will define floating as a bluffing play where you call a continuation bet made by a pre-flop raiser with the intention of taking the pot on the turn with a bet or raise. In this situation you may or may not have a piece of the flop, but you feel certain you don’t hold the best hand. If your opponent was being aggressive with just two over-cards it becomes very difficult for him to now call your new aggression in the hand.

An Example of the Float Play

In a $1/$2 online no-limit hold’em cash game, an opponent raises in the cut-off seat to $6 and you call on the button with

Your opponent folds and you take down the pot.

Why this play worked…

From your observation this is an aggressive player who is playing multiple tables at once and is continuation betting a high percentage of the time. His range for raising in the cut-off seat is extremely wide and he is continuation betting with his entire range which includes a lot of Ax hands, suited connectors, and broadway cards that missed the flop. When you call the flop, he is likely going to put you on a range that includes AJ, KJ, QJ, JT, J9 and various pocket-pairs. When the

hits, it really doesn’t change much in the hand and he has to fear that you will call another bet on the turn. Since he doesn’t bet here, it is very likely that he has nothing and has given up on the hand. This is your turn to pounce and take it down.

Criteria for a Successful Float Play

While you do not need all of these factors to be in place to pull off a float play, these are the ones to look for when considering it:

Bluffing is always easier and carries a much higher percentage of success against one person rather than multiple opponents – and the float play is no different. There are certainly times when a float will work when you call a raise on the button and the big blind comes along for the ride, but you should generally focus on times when you are up against one other player.

Your position in the betting order is also important. While there are some instances where you can pull off a float play out of position (see below), you will have a much higher rate of success if you are able to act last post flop. You should be looking to call a raise on the button or in the cut-off position; generally from another late position raiser.

The vital ingredient for pulling off a successful float play concerns the type of player you’re facing. If you are playing against a very passive player who always checks the flop when the miss and now they are betting, a float will likely not be the best play. You want to float against players who frequently continuation bet. But not only that, your opponent has to be capable of folding. There are many players that are robotic in their actions and are playing multiple tables at once (if online). They will often continuation bet once and give up if they encounter resistance so they can move on to the next hand without thinking too much.

Ideally you want to be facing an opponent who is capable of not only folding, but also 2nd level thinking. While a float can certainly work against someone who is only thinking about their cards (“I missed the flop and my bet didn’t work, so I better give up”), it will often have more success versus someone who is putting you on a hand. They may hold a hand like pocket tens on an AK7 board and give up on the turn because they are putting you on an ace. And this is why your flop call and turn bet should tell a believable story about the hand range your opponent is putting you on.

The Texture of the Flop

We’ve already discussed the type of player who you’ll have a higher chance of successfully floating. But your decision to float the flop should only be made once you’ve actually seen the flop – and there are good flops to float, and bad flops to float. Let’s look at some examples.

The following are good board textures to float:

The following type of flops make it believable that your hand range is made up of top pair hands and draws:

Such flops are unlikely to have hit our opponent:

We can represent that we have a mid pocket-pair or top pair.

Board textures not to float

The type of flops not to float includes very wet, high card boards:

Your opponent isn’t likely to have bet such a flop without a good hand.

While you do not need outs to make the float play work, they often can provide some insurance. For example, you may hold bottom pair or you may have a gut-shot straight draw and over cards. In this case, your plan for the hand isn’t to chase your outs or calling because you have odds. You are calling in order to bluff the turn and have outs in case the player actually has a hand.

If you are going to float on a bluff, you also need to take a similar line with hands of value so it’s hard to put you on a hand and it places doubt in your opponent’s mind. If you are only making this play as a bluff people will catch on. As with any play, you don’t want to your opponent to pick up a pattern and start adjusting to it. Pick your spots and go with the flow of the game.

So far we’ve examine the classic float play, whereby you call your opponent’s continuation bet in position and then bet when they check the turn. Now let’s take a look at some of the floating variations so that you’re fully equipped to deal with them.

In many cases, when an intermediate player bets into you after calling your pre-flop raise, they are trying to define the strength of their hand and will often shut down if you call them. While raising can be a fine play, you can often do it for cheaper by floating and betting when they check the turn. In many cases, your call actually looks stronger than a raise since a raise can be interpreted as a bluff. In addition, the turn can also bring scare cards that allow you represent a wider range and cause your opponent to fold.

Floating Out of Position

While you should exercise caution floating out of position, you can do this with the right board and when you have a good read on your opponent. On a heavy drawing board you can float the flop and lead the turn to represent a made straight or flush. Against a player who will continuation bet once and give up, you can check/call the flop and then check the turn to see how he reacts and then bluff the river. However, this has to be done only against the right type of player since this will look like a very bluff heavy line.

As the game of poker evolves, players are using the float play more and more. Not only do you need to adjust against them, you need to recognize when good poker players have adjusted to it against you. This can only come through paying close attention to the players and the game flow at the table.

This is a very common line to take with a marginal hand versus a player who is capable of floating. If you are up against a thinking player and are planning on floating, you need to be prepared for this line. There are different ways you can combat this and are very dependent on the board texture and your table image. There are times when you can check the turn if it brings you good outs and there are times when you need to be ready to bet the turn and the river if it tells an accurate story about the hand you are representing.

Another effective strategy is to raise their turn bet. This is a fun play to make and can work really well with the right bet sizing reads. Here’s an example:

You decide to call the 800. The turn brings the

The small blind folds and you take down the pot.

If you are purely floating as a bluff, you have to have a dead on read that your opponent is capable of check-folding the river after they bet two streets. Because you are calling the flop and turn, then betting the river, this type of bluff can get very expensive and is often fancy play syndrome at most low and mid-stakes games. Do not use this play unless you are an experienced player.

The float play can be a very effective arsenal in all forms of poker, whether you are a cash game or tournament player. It is one of the many ways that you can exploit a positional advantage against the right players. You should be targeting players who you think will often bet once and give up and those who you have a good read on their range of hands. The float play will never work unless you try it, maybe make a few mistakes, and keep practicing. While there are some turn cards that should cause you to abandon the play, you can’t get scared when it’s time to act, so trust your gut instinct.

But let’s finish with a word of caution; while the float play can be very effective ploy, it’s also a strategy that more and more players are using – and defending against. So don’t overuse the float play. You don’t want to your opponents to pick up a pattern and start adjusting to it, so pick your spots wisely. As mentioned above, against good players who are capable of countering a float play, in order for your floats to be believable you must also be taking the same betting line with good hands as well. 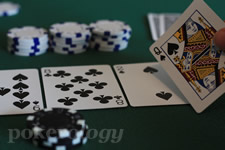 The vital ingredient for pulling off a successful float play concerns the type of player you’re facing.