Over time the use of this strategy has almost become the 100% default action by many poker players. Right up front we will state that if players employ this poker strategy every time they have taken the lead pre-flop, they are continuation betting too frequently. When this is the case, what can be utilized selectively to one’s benefit can become a major leak. As in all of poker, predictability is analogous to stepping into the cross hairs of all but your most obtuse opponents.

In this lesson we will attempt to explore the why, when and against whom this action should ideally be taken. We will also recommend some counter strategies for when your opponent is the one making a continuation bet.

The Purpose of Continuation Bets

As stated above, the strategy is based upon the fact that a hand is not usually improved upon by the flop so attacking your opponent with further aggression, regardless of your holding, can many times win the pot. It can also be used a reverse bluff when you hold a strong hand and would like to build the pot. The main purpose, however, is to win the pot immediately.

The fewer opponents you are facing the higher your chances of success in winning the pot with a continuation bet. As a general guide, consider the following:

Continuation betting against more than one opponent, while much less frequently, gives your game a degree of unpredictability. Although if there are four or more players then you’ll probably want to have hit the flop before sending more chips toward the middle – and a check may be in order.

The Texture of the Board

As the Mad Genius of Poker, Mike Caro, has stated… hold’em is a game of high cards while stud is a game of live cards. Keeping that counsel in mind, if the flop comes Jack, Queen and King there is a high likelihood that one of your opponents may well be holding a match to one of these wheel house cards. They weren’t calling your pre-flop raise with 6-3 offsuit!

The texture of the flop is critical to whether a c-bet is the play with the best expectation. Aside from high cards, be careful of coordinated boards that favor straight and flush draws. Ideally, you’ll want to see a ragged, rainbow flop.

Let’s look at a few examples. Suppose you raise with

and get called by the button and the blinds. The flop comes

This is not a good spot to c-bet. You’re against three opponents and your hand value is only an inside straight. You missed your high cards and flush potential and one of your opponents could have easily connected with such a flop. If checked to, then check and hope you get a free look at the turn. If you bet and then get raised by the button or check-raised by one of the blinds, you would have to fold, so see if you can hit your draw on the turn.

Let’s suppose you’re holding the same hand, yet this time you’re against a single opponent and the flop is dealt

This is a completely different situation and if your opponent checks it’s a great time for a semi-bluff c-bet to either take the pot right then or if called you have two overs and the second nut flush draw. If you were facing more than one opponent then it would also be a good time to make a continuation bet, unlike the previous example.

You can also make a continuation bet when you flop a very strong hand, such a set. Remember that in poker it’s important to play different hands the same way. If you regularly make continuation bets when you whiff on the flop, you should also bet when you make a strong hand too – so as not to arouse suspicions. Your intention in poker is to manipulate your opponents and one advantage of frequently c-betting is that you will give your good hands some cover and disguise.

If you’re playing no-limit hold’em then you will also need to decide the size of your wager when planning a continuation bet. Many factors should contribute to your decision including: opponent playing tendencies, stack sizes and your own table image. You need to balance your bet size for two reasons. Understanding that the strategy is not fool proof… you don’t want to bet too small which will invite a call and to bet too large becomes foolhardy.

But it’s important to be consistent with your betting. Therefore your continuation bets should be the same size as any other post-flop betting and conventional wisdom seems to favor a bet size of at least half the pot. To bet less extends better calling odds to your opponent and to bet more becomes too costly when you run into an opponent that actually has a hand. This is not a hard and fast rule and you’ll find yourself making adjustments through experience, feel and the general nature of the game.

While it is true that knowledge of how you believe your opponents will react is a universal poker criteria to successful play, when betting into an opponent with nothing, it is good to know how tight or loose he may tend to play.

In addition, just as you are making a play so may be your opponent. Is he savvy enough to be floating you? This is a play in which your opponent may suspect you are continuation betting so he just flat calls expecting you to check on the turn. If you do check after he calls your continuation bet, his intention is to seize upon your apparent weakness and bet to steal the pot.

The factors outlined above are the major criteria one should evaluate to determine the wisdom of making a continuation bet. In a perfect situation you should be in position against a single weak/tight opponent making a bet of about half the pot into a raggedy board. The half pot bet will offer him 3-to-1 odds which aren’t very good drawing odds. If you know your opponent is knowledgeable regarding drawing odds, this becomes a positive to offering him poor odds to a possible draw.

Now let’s take a look at the same situation in the mirror. Instead of aiming the shotgun at a lone opponent, we’ll imagine you are looking down the barrel of the continuation better. At the risk of sounding like a broken record, always be observant of your opponents in order to improve your decision making. Is he aggressive and loose or timid and tight or where in that range does he dwell? You know many players love to see a flop and then feel compelled to fire a continuation bet to end the action. Know your opponent’s tendencies – this knowledge pays dividends.

Reverse engineering is a term used in many fields to describe a process wherein you first dissect a competitor’s product, marketing plan or just about anything in order to determine how it’s made or done with the intention of replicating it or improving upon it. The best way to combat an opponent who is continuation betting is to understand his thought process and, if appropriate, play back at him. Review the following checklist to determine if you’re being manipulated by an opponent’s continuation bet.

Identifying the Meaning of Your Opponent’s Bets

There are many different types of bets in addition to continuation bets… value bets, probe bets, and semi-bluffs as examples. There is nothing worse than attempting to thwart what you believe is a continuation bet by calling all the way to the river only to face the ultimate revelation that your opponent was value betting the whole time.

Continuation betting is a solid poker strategy to employ when the criteria outlined above is in place. However, it should represent only one arrow in your quiver of ploys. As in all of poker, don’t use it every time you have been the pre-flop aggressor as you will become predictable and, therefore, exploitable. Instead, observe your opponents and determine who among them does not understand the wisdom of mixing up one’s game. 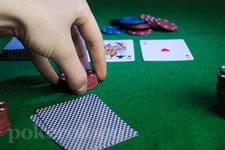 The fewer opponents you are facing the higher your chances of success in winning the pot with a continuation bet.