To be a top level poker player, of any game, you must understand the concept of table image – yours and your opponent’s. Then you must learn how to exploit it.

Your Opponent’s Image in Your Mind

This is the simplest form of table image. It is how you view other players. At its most accurate it is your impression of them based on your observations of the way they play poker. In its simplest form you can reduce it to a word. Are they tight, weak, aggressive, or passive? Are they chronic bluffers, straightforward, tricky, or dumb? You decide.

Update It Based on What You See

Don’t let stereotypes blind you to what a poker player is really like. It’s easy to start off with a generalization based on your opponent’s sex, race, age, or general demeanor. This may be helpful as a starting point in a live poker game. But if you are to have an accurate and useful image of your opponent, it must be constantly updated based on what you see him do. Say, for example, that from your experience, you have noticed that young players tend to be aggressive. If you retain that as your impression of every young player you play against, no matter what he may do at the table, you will be doing yourself a disservice. Some young players, perhaps most, are indeed very aggressive. But many are not. The table image of your particular opponent should be based on what you have seen him or her do – not on your first impression.

It does you no good to make observations about your opponents if you don’t use those observations to good use. Form an opinion about your opponent and use it to figure out what their betting action means. For example, if you have observed that your opponent plays very few hands, but that when he plays he almost always comes in for a raise, you can conclude that he is a consistently tight and aggressive player. So if he raises in front of you, you can narrow the range of hands he’s playing, putting him on a very strong hand – probably a premium pair or a big Ace. If you have a weak Ace your best option is probably to fold. On the other hand, if your image of your opponent was of a wild and loose player, with that same weak Ace you might want to call or even raise (depending on what you thought his image of you was).

Here’s another example of your opponent’s table image affecting your play. It’s the river. You’re in early position and have been check calling with your flush draw. You and your opponent each have fairly large stacks. The river doesn’t make your flush – but it makes a straight possible:

You have nothing. If you know that you’re against a very timid player you might bet the river to get him to fold. On the other hand, if you know he’s sharp enough not to buy such a play, and tight enough not to have been betting with nothing, you should probably agree to check and give up to a bet from him.

Here’s another example of how to use your opponent’s image to your advantage. You’ve flopped top pair medium kicker in late position against an early position raiser. If he bets the pot on the flop, you might want to call if he has the image of a weak player, hoping to raise him on the turn to take the pot away. On the other hand, if he has a particularly strong image you might want to raise right away.

Your Image in Your Opponent’s Mind

For the lowest limits in poker, against the simplest opponents, you can pretty much get by just by thinking about how they play. Play straightforwardly, characterize your opponents, and you will usually do enough to be a winning poker player. But against tougher opponents, the ones you’re likely to face as you move up the ladder to bigger stakes and tougher games, you will have to worry about the image you have at the table.

Understanding your image in the mind of your opponent requires that you see yourself through their eyes. This is a difficult step for many poker players – caught up as they are in how they’d like to look. But if you are restricted by ego from acknowledging how you truly appear, you will not be able to maximize your ability to deceive your opponent.

Your Table Image and Your Recent History

Generally speaking, your image at the table will depend on your recent history of action. Forget how you think of yourself. Think about how a player, knowing nothing about you, would view your play based on what they have seen lately.

Here’s an example. You think of yourself as a tough, tight, aggressive player. You’ve played for years in some very big games and have made most of your money by being more selective, more disciplined, and then more aggressive than most of your opponents. You tend to raise aggressively when you perceive yourself to be ahead, you tend to only chase when you have the pot odds or the implied odds to do so, and when you don’t have those odds, and when you’re behind, you fold.

In this poker session you were fortunate enough to be dealt a much higher than average percentage of strong pre-flop hands. More often than normal for you, you found yourself in a position to raise pre-flop. In fact, you did so five out of the first six hands. The flop hit you every time. You initiated the bet or raised every single time after the flop – getting your opponents to fold.

What do you think your table image will be to those opponents who have been observant enough to have noticed how you have played? Do you think they’ll see you as a strong, tight aggressive player? Surely not. Though that might describe your general style of play most of the time, it would be far off from what your opponents had recently observed. Given your recent history at the table, they are most likely to view you as a maniac – someone who raises with little and then keeps pounding away. How are they to know that you have been uncharacteristically hit by the deck?

For you to take advantage of them, you’d have to recognize your likely image in their minds. Forget how you see yourself. Forget that their impression doesn’t do you justice – and that anyone who was really familiar with your play would know that these past six hands were not representative of your true nature. That’s irrelevant (unless one of your opponents has played a lot with you in the past). What matters is what your image is now.

Taking Advantage of Your Table Image

You can use your table image to your advantage. If your opponents think that you are a maniac, they are much more likely to disrespect your bets and raises. Accordingly, you should tend to be more aggressive than normal with very strong hands – worried less about your opponents folding to your bet than you would normally be. Similarly, if your image is that of a maniac, you should surely not try to bluff – as you won’t be believed.

Conversely, if you are viewed as weak – as someone who folds to undue pressure even if the proper play would be to call – then you should be more inclined to chase – since your opponents will be more likely to bet their weak or moderately strong hands very strongly – assuming you are more likely to fold. Similarly, if you are viewed as very tight and passive, you should be more inclined to bluff and semi-bluff, since your strong bets will be more likely to be believed.

One final note. Your table image is not static. True, your clueless opponents may not ever think about what type of poker player you are. But your more observant opponents, for whom your table image is important, will be re-evaluating what type of poker player you are, as they see more of your play. Though they might characterize you as tight early in the session, as you get more playable hands and play them, you’ll be seen as something more complex by your better opponents. For example, a three-bet might knock your stronger opponents off of their strong hands pre-flop the first couple of times you try it. But by the third or fourth attempt, your better opponents will begin to be suspicious that you are doing it without the typically very strong hands that most players require for this pre-flop move. In a phrase, they will begin to expand the range of hands that they think you need to make such a move.

Similarly, if you call pre-flop and then raise your opponent after the flop a few times in a row, they may well start to think that you are doing so as a sophisticated play for the pot rather than as a true indication of the strength of your hand. You need to give your opponents credit, accordingly, for catching on. This doesn’t mean that you can’t use deception against them. Rather, it just means that you have to account for their new impression of your play when you devise your deceptive poker plays. 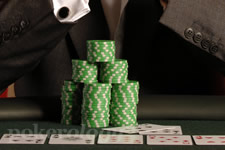 If you are restricted by ego from acknowledging how you truly appear, you will not be able to maximize your ability to deceive your opponent.