One of the oldest adages in poker – it’s one you’ve heard repeated time and time again – is that if you can’t spot the fish during your first ten minutes at the table, it’s you. Most adages have a least a modicum of truth in them, and this one has a lot.

How do you spot the fish at the poker table, and what should you do when you can’t? Everyone knows that you have to be observant at the poker table, but there’s so much going on that it’s just about impossible to pay attention to everything. And even if you could, there are some things that aren’t happening that you need to pay attention to also. More about that later.

The Best Way to Study Players

Increasing levels of familiarity will help you with this task. That’s another way of saying that as you continue to watch your opponents, you’ll pick up things later on that you probably won’t see initially. So it’s best to look at the big-picture things first.

What’s obvious and available for all to see? When first sitting down at the table, look for skill signs and begin correlating your opponents’ play with the hands they turn up at showdown. You can easily do both at the same time.

Poker skill signs are easily found in live poker games. How comfortable is your opponent with the game, the speed of play, and the others at the table? Is he comfortable with his chips? Does he riffle them with an air of sureness and certainty that suggests he spends hours upon hours at the card table? Sure, there are poker players graced with manual dexterity who can riffle chips like a slight-of-hand artist and can’t play worth a damn – but there’s usually some correlation between these things and skill.

In some cases it may be very high. In others, not at all. But you have to start somewhere and if your opponent is at ease with the game’s mechanics, give him credit for being able to play, but be ever vigilant and willing to downgrade that rating based on information gathered later.

The most accurate information you’ll be gathering about your opponents will be the hands they turn over at the showdown. Whenever cards are turned over at a hand’s conclusion, the information is gold. You know what your opponent was holding and if you replay each of the betting rounds in your mind, you’ll be able to see how he valued his particular hand in the face of whatever action was initiated by him or in response to the action of his adversaries.

Showdown hands provide insight into a player’s willingness to aggress if he was the guy doing the betting or raising. Was he aggressive with a very big hand? Was he on a stone cold bluff? Was he semi-bluffing with a drawing hand? All of this information can be gathered and stored in your mental database simply by observing the hands players expose at showdown and correlating it against the action that took place on each wagering round.

This is the most precise and reliable information you can gather about your opponents because it is all based on observable facts. You don’t have to make assumptions about what you think he might have had; the facts of the matter – in the form of showdown hands – are all there for you to see.

You can learn which players are willing to defend their blind from early position with weak or medium strength hands and who will cold-call a raise with a marginal hand. Showdown hands will also tell you which players will call when the pot odds are not favorable to them.

Who’s a calling station? Who is aggressive all the time? Which players like to limp-in regardless of their place in the betting order simply because they like to see as many flops as they can?

Who always comes in for a raise? Which players will always raise from late position when first to enter a pot? Which of your opponents will never release a hand like Ace-King or pocket Jacks, even when all the signs point to the fact that they are beaten?

Players who won’t fold can be value bet to death, but they can’t be bluffed. Others, who will fold all but the best hands, are easily bluffed, and scrutinizing opponents’ hands that are turned up at the showdown and examining them against any whatever wagering took place on the various betting rounds just might buy you a license to steal.

Every time a new player sits down at the table, you have to begin scoping out his or her game. While it’s generally a good idea to develop a quick impression of his play during his first 10 minutes at the table, that’s not nearly enough.

Many players come to the table resolving to play good poker, only to change gears the minute they lose a hand. When this happens, you need to reassess your opponent. Maybe he was pretty snug – and therefore bluffable – when he first sat down, but after taking a lick or two, he might fly open and call every bet made in his direction. If that’s the case, you have to do a complete about-face and become a value bettor rather than a bluffer – at least where this guy is concerned.

How much your opponent chooses to wager in a no-limit game is critically important information. If your opponent is a raw beginner who bets proportionally to the strength of his hand, you can play him as though he’s turned his cards face up.

Some of your opponents will play power poker. They are very selective and aggressive and when they bet, it’s usually a large wager. Others are small-ballers, typically wagering less than three times the big blind when they raise before the flop.

Many players will try to keep the pot small with medium strength hand, while betting big with powerhouse hands and bluffs too – albeit for very different reasons.

The only way you’ll be able to categorize these opponents – and thereby determine an appropriate strategy for beating them – is to examine showdown hands and correlate them against the wagering that took place during the hand’s play.

In a live poker setting you also need to be aware of common poker tells, even though they are seldom as reliable as watching the hand an opponent turns over and correlating it with how he played on every wagering round of the just-concluded hand.

Poker tells, by definition, require some educated guesswork on your part and they have to be applied differently for each opponent. Nevertheless, there are a few nearly universal tells that you can rely on, unless your opponent’s action shows you that a particular tell does not apply in his case.

When you first sit down at a poker table, your antennae won’t be able to pick up nuanced signs. So you have to begin painting with a broad brush. Find out who’s loose and tight, and which players are passive and which opponents are aggressive.

That’s your basic cut at reading a table: loose vs. tight; passive vs. aggressive. You’ll find players fitting into each of those four basic boxes:

Some of the time your opponent’s will wobble and vacillate between boxes. Relegating your opponents into these little squares will seldom be a perfect fit, but it’s a start. Once you’ve got them categorized, begin refining your judgments about how they play with an eye to determining how they vary their play under differing circumstances.

Some players get very aggressive when raised while others seem to turn turtle and curl up in a foetal position.

Studying your opponents is always a work in progress. Even when you’ve studied an opponent for quite some time and feel like you have a good read on him, it’s important to remember that he is not a machine that responds the same way every time. He will fool you at times, and surprise you at others. He may be different tomorrow than he was today.

Studying opponents is not a perfect science. But if all you do is get a little better at your game because you took the time to read the handwriting on the wall that every poker player offers up to the table at large, you will have raised your game and that’s always a step in the right direction. 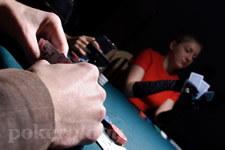 The most accurate information you’ll be gathering about your opponents will be the hands they turn over at the showdown.