The Importance of Stack Sizes

In no-limit hold’em the size of your stack of chips and those of your opponents should have a significant impact on how you play a hand. If you’re playing in a $1-$2 no-limit game and have $250 in front of you, but you have just one opponent who has only $25 left to wager, the effective stack size is $25. That’s all you can win from him and all he can win from you. The maximum potential leverage of a wager either of you might make is only $25.

and come out betting $6, which is a typical raise of three times the big blind. We’ll assume you are called by one opponent and both blinds fold. Now the flop is

. You think your pair of queens is the best hand and come out betting.

Let’s say you bet $8, a wager of slightly more than half the pot. Your opponent, who began the hand with $25 and called your initial wager of $6, now has $19 remaining. What do you think he’ll do? He’s not likely to call your bet. With only $19 left, he will either fold or raise all-in, because an all-in wager stands some chance of inducing you to fold. Your bet on the flop means your opponent would only have $11 remaining if he called, and if he does call, he’ll probably face a call for the remainder of his chips on the turn. He’s much better off raising and getting all his chips in right now, rather than calling his money off in dribs and drabs throughout the hand.

Your opponent’s big advantage to raising all-in, rather than calling now and then having to call for the remainder of his chips on the next betting round, is that raising gives him what players refer to as fold equity. That’s another way of saying that as long as there’s some chance that your opponent’s raise will convince you to fold, in the long run he’s better off moving all-in than he would be by simply calling your bet and then calling another wager on the next betting round.

Suppose he does raise all-in. You’re probably going to call because he can’t hurt you all that much even if his hand is better than yours. In fact, it’s tough to think of why you would fold under these circumstances. After all, if your opponent was fortunate enough to flop a set, you still have an opportunity to improve and win the pot, and the cost to call is reasonable because he doesn’t have many chips remaining. Moreover, he might have a hand like K-J and thinks his pair of jacks is the top dog, when in fact, you’re still ahead of him. When you think of the hands your opponent might be holding that would motivate him to raise under these circumstances, the majority of them are currently running behind your pair of queens.

Now let’s assume the same hands, but this time you each have $500 in front of you. The effective stack size is now $500 instead of $25, and that’s a big difference. You could win $500, but you could lose that much too. It’s a far cry from the $25 effective stack size in the previous example. Your risk is precisely 20 times greater than it was before—$500 as compared to $25—and that increased level of risk should point you in the direction of increased prudence.

Suppose you make a slightly-more-than-half-the-pot $8 wager and your opponent raises $150. You have an overpair to the board, but realize that even if you call his $150 wager, you can expect to see bets on the turn and the river designed to put your entire $500 stack at risk. Unless your opponent is a complete maniac—someone who bets and raises huge amounts with nothing at all in his hand more often than not—discretion is usually the better part of valor and folding is the best play.

Even though your pair of queens figures to be at the top end of the hands he would raise with, it is certainly not better than all of the hands he might hold. So there’s some room for doubt that didn’t exist in the earlier example. Well, to be very precise, the level of doubt might be the same in both examples, but the cost is really quite different. If your opponent was fortunate enough to flop a set in the example where he only had $25 remaining, you couldn’t get hurt very much if he raised with a hand that happened to reside at the top of his potential holdings. But in a situation where the stacks are big and each of you had $500 potentially at risk, folding an overpair is usually a better decision than calling off all your chips.

Putting All Your Chips at Risk

You will find some opponents who will go all-in regardless of the cost with a big pocket pair, particularly pocket aces, and that’s a major leak in their game. Big and pretty as they are, aces are only one pair, and if his opponent flops two pair or a set, he’s looking to take every chip from the guy willing to go to his grave with aces.

While you’re not going to crack an opponent’s pocket rockets all that often, you don’t really have to. If you have an opponent who is willing to play top pair or an overpair for all his chips, all you need do is have this confrontation once a day or so to ensure that you have a healthy return on your investment at the poker table.

Many poker players make it a point never to go broke with one pair, except for situations where they are short-stacked in a tournament and have to make a stand in an attempt to double up or go home. But under normal circumstances, many of your opponents will not put themselves in a position where they have to confront the possibility of going broke with a single pair—even if it’s aces.

But some players are willing to put all their chips at risk with one pair. Players who were reared on fixed-limit hold’em seem to really suffer from this problem. To limit hold’em players, pocket aces are generally a through-ticket to the river, barring some odd board like four of a single suit that doesn’t match yours, or a four-straight on board with a bet and a raise before the action gets around to you. But those are rare birds and limit hold’em players generally play a pocket pair of aces fast and strong regardless of the board.

This affliction also bedevils very tight players too. They play so snugly that when they finally pick up a premium hand they are unwilling to release it, since they fold so many other hands with regularity. These players are often smart enough to understand they can be in trouble with one pair—even when that pair is aces—but are often emotionally unwilling to release the kind of hand their tight, rocky play has been waiting for all session.

One of the expensive lessons learned when taking up no-limit poker is that decisions made on one betting round impact those made subsequently. In a fixed-limit game, a bet on the flop or the turn is sort of independent of what might transpire on subsequent rounds. Sure, your opponent might bet the turn if he bet the flop, but the amount of his bet is a known quantity and can easily be factored into a play-or-fold decision on that earlier betting round.

But whenever an opponent bets or raises on the flop or the turn in a no-limit game, there’s a good chance he’s going to make an even bigger wager on the next betting round. When all of your chips might be at risk on subsequent betting rounds, you have to consider the potential cost of impending bets when considering a decision to call now.

This has the effect of implied odds being leveraged against you. A call made at the price of a few chips when you have a drawing hand must be made with a considered awareness of what you intend to do if you miss your draw on the current wagering round and your opponent fires a very big bet at you subsequently. If that happens the cost to take a card off and see the river will have gone up dramatically, and the odds against completing your hand with only one card to come—as compared with the odds against making your hand with two cards to come when you’ve just seen the flop—have just gotten significantly longer.

You’ll find many poker players – particularly those who play online – actively seek out no-limit games where they can buy in for a short stack. There they employ tactics designed to double up whenever they can while minimizing big losses specifically because they do not play a big enough stack to put their bankrolls at risk.

A short-stacker might look to buy-in to a cash game from between 15 and 30 big blinds. That’s a big difference from the maximum buy-in, which can range from 100 big blinds to an unlimited amount. Because of the difference in stack sizes, short stacked and deep stacked players are essentially playing different games for different stakes at the same table, and whenever there are two deep stacked and one short stacked player contesting a pot, the side pot is likely to be much larger than the main pot.

Because a short stacked player has little leverage over the actions of his more deeply stacked opponents, he has to play tight poker, while the deep stacked players can employ a looser style, using their stack size to pressure other players while manipulating the pot odds offered to them.

A tight-but-aggressive short stack strategy works best with a minimum of seven others at the table. If the table is short-handed, a short stacked specialist will be hard pressed to keep up with the cost of the blinds paid while waiting for big, playable hands. In addition, short stack strategy works better against loose opponents. Our short stacked specialist is looking for opportunities to go all-in for his short buy-in, and hoping for two or more callers when he does.

Determining the effective stack size is critically important in every hand you play. Without an awareness of how much potential risk exists based on the stack sizes, a player can easily get into more trouble than he’s looking for. It’s been said that poker is a game of money played with cards, and without being cognizant of stack size and the amount of money at risk on any given hand, a player can be in grave danger and not even realize it.

The traps of stack size are easy to avoid. Just estimate your opponent’s stack size—and always be aware of how many chips you have too—at the beginning of a hand. You needn’t be precise about it. A good estimate is all that’s needed to help you avoid the dangers of playing too small a hand for too much money, or playing too weak a hand to survive as a short stack specialist. 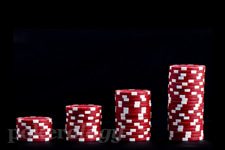 Without being cognizant of stack size and the amount of money at risk on any given hand, a player can be in grave danger and not even realize it.