Never bluffing in a poker game is resigning yourself to being a lifetime loser. You just can’t win without stealing a few pots every now and then; it’s that simple. But if you bluff too often, your opponents will figure it out – even the weakest of them will eventually catch on – and they’ll call whenever they have any sort of a hand, fold when they don’t, raise with their big hands, and eventually break you in the process.

That makes the proper strategy abundantly clear. In poker you have to bluff some of the time, though in moderation – not too often but not too infrequently, either. You need the right mix, and you need to figure out when to bluff and how often to do it.

The Truth About Bluffing

The truth about bluffing is that there is no simple, formulaic answer. Against poker players who call most of the time, you should seldom bluff. And if your opponent is a real calling station, you should never bluff. Instead, the way to beat these players is to bet your hand for value, knowing they’ll call with anything, or even nothing at all, to prevent losing to a bluff. Against a real rock, you can steal much more often, since you know he will toss away all his mediocre hands, and if he raises, you can safely throw away your bluff.

But against most other poker players who sometimes call and sometimes don’t there’s no magic button to push that tells you when to bluff. But there is something you can do, and that’s to semi-bluff with your drawing hands. When you do there’s not much your opponent can do about it.

What is a Semi-Bluff?

A semi-bluff is nothing more than a bet with a hand that’s probably not the best one right now, but has a pretty high likelihood of improving to the best hand on subsequent rounds. Drawing hands – particularly straight and flush draws – fall conveniently into that category.

If you flop four to a flush there are nine remaining cards of your suit that will complete your hand, and the odds against that occurring from the flop to the river are only 1.86-to-1 against you. That’s less than 2-to-1, and that’s not bad. If you want to look at the positive side instead of the odds against you, a flush draw has a 35 percent chance of getting there from the flop to the river.

If you flop a straight that’s open on both ends, or a double belly-buster – a five-card combination with two “holes” so that any of eight cards will complete it – the odds against making your straight from the flop to the river are 2.17-to-1 against you, which means you figure to make it 31.5 percent of the time. That’s not quite as good as a flush draw, but it’s good enough, and because the pot will usually be offering more than 2-to-1 on your money, it’s usually a worthwhile wager to make.

Selective Aggression is the Key

One of the keys to winning poker is selective aggression, which always pays off in the long run. It’s almost impossible to win in the long run by playing poker passively. If you do, you’ll win the minimum on your good hands because you weren’t aggressive enough to build the pot, and you’ll lose the maximum when your opponents have winning hands and are willing to commit money to them. You can’t win with unmitigated aggression either. Opponents tighten up slightly against maniacal players, but then really commit their money to pots in which they have the best of it and break the maniac in the process.

Semi-bluffing is one way to be both selective and aggressive. By betting drawing hands that have a decent chance for improvement, selectively aggressive players give themselves two ways to win. When an opponent folds to their bet, the semi-bluffer takes down the pot right there, and it doesn’t matter that he was trailing at the point he made his bet. Even if called, his hand can improve on either of the next two betting rounds, and if our hero is drawing to a flush or a straight, there’s a very good chance he’ll win the pot at the showdown if he makes it.

It’s this combination of bluffing along with holding a drawing hand that can easily improve which makes semi-bluffing such a powerful concept. Let’s say you have a flush draw on the flop. Although your hand will improve to a flush 35 percent of the time by the river, you’re behind right now even if your opponent holds even as little as one pair. In the long run he figures to win 65 percent of the time if all you do is quietly call in hopes of completing your hand.

But if you come out betting, or even check-raise with your flush draw, and your opponent folds 25 percent of the time you do this, you’ve gone from having a 35 percent chance of winning to a 60 percent chance, and crossed the Rubicon that separates long-term winners from others.

That’s the beauty of semi-bluffing. Your two ways to win are added together to turn your hand from one that figures to lose most of the time into one that is a long-term winner.

You Can’t Semi-Bluff with Just Any Hand

You’ve got to be careful. You can’t semi-bluff with just any hand, because just any hand usually doesn’t have the additive power to improve enough to be a long-term favorite. What if you have an overpowering urge to semi-bluff with 8-3 offsuit? You have no flush draw and no open ended straight draw either. The only way you figure to win at the showdown is to catch two running eights, two running treys, or an eight and a trey on the turn and river, and the price you’ll pay to draw is too high.

And the chances of improving to the best hand with a flush draw or a straight draw are a lot better than the chances of catching two miraculous cards on the turn and the river to make a winning hand out of an unimproved 8-3 on the flop.

Because you shouldn’t bluff all of the time, but have to bluff some of the time in order to win, betting your better drawing hands adds the selective ingredient to the aggressive requisite in the recipe for winning poker.

If you’re playing poker against savvy opponents, the kind who study your play and understand that you like to semi-bluff with flush and straight draws, it actually increases your opportunity to bluff effectively – but only on occasion; not all of the time – with hands like 8-3. If you do elect to bluff by betting an otherwise hopeless hand when two suited cards flop, you can bet again if a third suited card appears on the turn or the river. Your opponent, who presumably has been sensitized to your proclivity for betting flush and straight draws, is likely to believe you and release his hand when you do.

The other side of this coin is that your clever opponent will tend to make a sizeable raise any time he thinks you’re semi-bluffing. If he knows he has the best hand right now and thinks you’re drawing to beat him, he’ll punish you by charging a hefty fee to draw to your hand. He may be able to price you off of your semi-bluff by doing this because the cost to draw will not be overcome by the size of the pot you’ll win if you get lucky.

Like almost everything in poker, each tactical ploy is a two-way street, which means, of course, you’ll have to think along with your opponent just as he is thinking along with you. Nevertheless, the bright side to semi-bluffing is that most of your opponents won’t play well enough to foil your strategy, and in the long run, you’ll find that semi-bluffing with drawing hands is a strategy that pays off for you in a big way. Because you have to bluff some of the time to have any chance of being a long-term winner, why not use semi-bluffing when you have the opportunity? It gives you two ways to win and has a lot more going for it than randomly opting for a naked bluff with an otherwise hopeless hand. 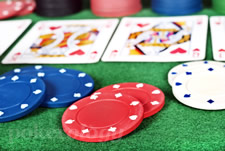 Betting your better drawing hands adds the selective ingredient to the aggressive requisite in the recipe for winning poker.