Implied odds are important when you’re the guy on a draw who’s hoping to run down an opponent with a hand that’s currently better than yours – but only right now, not necessarily later. Reverse implied odds come into play when the shoe’s on the other foot – when you’re the guy with the made hand – and your opponent is the one who’s drawing.

Just to cover all the bases, let’s not think about those fortunate situations when you’ve flopped a monster hand. Maybe you’ve flopped a full house, or top set, or the nut straight and the flop contains three different suits. Reverse implied odds won’t come into play here because you’re not concerned about opponents running you down. In fact, you’re hoping for them to improve… to a second best hand, one that’s good enough to bet on but still weak enough to lose.

Let’s think about all those marginal holdings – the kind that make up the majority of hands you encounter. With a marginal hand you generally want to go to a showdown relatively inexpensively – and so do your opponents. With your big hands and a sufficient number of weak bluffing hands to balance your betting line, you want to play big pots. That’s generally the plan for most no-limit hold’em players. When you have one of those all-too familiar, good-but-not great hands – the kinds of hands that have only a scant chance of improving – and your opponent either has a better hand already or is drawing to complete a big hand, future betting rounds could cost you a lot of money. Now the implied odds favor your opponent, and what’s worse, you might never know it.

Hands like small pocket pairs and suited connectors are hands that are helped by implied odds. But suppose you have

and the flop is

. You’ve flopped top pair with top kicker, but the board is draw-heavy, and could easily support a flush draw, a straight draw, two pair, or even a set. They’re all possible with this kind of flop. Still, your hand might be in the lead right now. Suppose there’s $30 in the pot and your opponent bets $20 and is all-in:

It’s an easy call and the fact that he has run out of additional money to wager negates the entire idea of implied odds.

But let’s suppose you’re playing deep stacked and each of you have $400 in your stacks, what are you going to do if the

Now what? Even if you call, you’ll probably have to call another bet on the river with a marginal hand and a scary board. If you check, he can check behind you and take a free card if he’s on a draw, or come out betting and you won’t be sure whether he has a big hand or is bluffing.

If he’s first to act, he can check and if you check behind him, he will have gotten a free card. If he checks, you bet, and he check raises, you’re also facing a tough decision.

Win the Minimum, but Lose the Maximum

Reverse implied odds often punish overly aggressive players. Although they usually win the amount of money currently in the pot when their opponents fold, they stand to lose the maximum if their opponent either has a better hand or makes one, then snaps off the aggressive player’s overly large wager with a marginal made hand that doesn’t figure to get any better regardless of which cards fall on the turn or the river.

Reverse implied odds, just like implied odds, are not mathematically precise since they require estimating how our opponents will behave on future betting rounds. If the current pot odds are good, you can often continue playing, even in the face of reverse implied odds. But if the pot odds are marginal and the board is draw-heavy with hands that figure to crush your made hand if they are completed, you should be trying to get to the showdown as inexpensively as possible, or thinking about releasing your hand.

In a nutshell, reverse implied odds should be considered when you are unsure about whether you have the best hand and it will cost more on future betting rounds to find out. 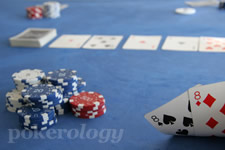 Reverse implied odds are never pleasant unless your opponent has no more money to wager.