The Reasons for Betting in Poker

Understanding how to bet is one of the fundamental skills in poker. If your aim is to become a skilled poker player, you have to understand why you are betting in the first place and how to manipulate your opponents into doing what you want so you can win as much as possible. Skilled poker players know exactly why they are betting and what they are trying to accomplish.

In later lessons we’ll cover some of the reasons behind calling a raise or re-raising, but they are far too situational, extensive, and quite simply beyond the scope of this lesson. Instead we’ll be keeping it fairly simple by examining the basic betting concepts that apply to pre-flop scenarios in no-limit hold’em when you’re involved in an unopened pot – that is, situations when you’re not facing a raise.

Before we talk about some of the reasons to open the betting by raising, be aware that in poker there are usually far more reasons to fold than to bet or raise. It’s important that you always exercise good starting hand selection. Put simply, don’t play too many hands. Most players do, and it’s probably the single biggest mistake made at the poker table. After all, whether you’re playing online poker or in a traditional casino, most of your opponents – like you – love poker. They came to play, not to throw away hand after miserable hand that doesn’t warrant wagering on. Unless you’re having a rare run of extremely good hands, most of the time you should toss your starting hand away with no regrets and save your money.

Why You Should Raise

“Why should I raise? I just want to see the flop and see what happens”. This is a common statement among novice poker players and it’s important to understand why this is ultimately a losing philosophy. While not as common or as significant an error as calling when you should have folded, failing to raise when the time is right will cost you money in the long run.

You should always strive to play an aggressive style of poker – which means that if you’re in the hand you are most often times going to be raising or re-raising. Good reasons to raise are as follows:

To Thin the Field

In most cases you don’t want to play a raised pot versus more than two other players. Even if you have a big starting hand it can still be vulnerable and you don’t want someone catching some random two pair hand or a crazy straight draw. The fewer people in the hand means you have fewer people to fight to win the pot and fewer decisions to make, so you should often be looking to raise when you enter the hand.

To Take Control of a Hand

Another very good reason to raise is that it announces to the poker table that you have a strong hand. Even if you miss the flop you can often carry on with your aggression by making a continuation bet and take down the pot. Since you raised pre-flop, players will more likely respect your next bet. When you raise pre-flop you’ll often find that other players will check to you after the flop, to see what you’re going to do. You’ve taken control of the hand.

To Raise for Value

The most common, straight forward reason to raise is when you have a good starting hand. Believing you have the best of it based upon your hand’s value you want to get more money into the pot – pretty simple, right? Not so fast! There are several other considerations to evaluate. Raising pre-flop for value can be somewhat tricky in terms of bet size because you want to accomplish several objectives:

You need to determine what your bet size should be to accomplish the above objectives. I believe you should be consistent in how you bet regardless of your holding so as to make it more difficult for observant opponents to put you on a hand accurately. My recommendation is to raise three times the big blind plus one additional bet for every limper in front of you. Do that every time and no one can get a read on your play. Also, this type of bet should accomplish all three objectives.

While you’re still learning how to play poker it’s very important that you avoid raising the minimum. A common beginner mistake is when they raise the minimum with a pair of Aces after three of four people have limped in. This is bad because while Aces are the best hand pre-flop, it’s unlikely that the others will fold. “But I want them to call and build the pot” – actually you don’t. Aces are not a favourite to win versus four random hands.

The point is that you should be raising an amount where you maximize how much you win.

To Get Others to Fold

Since bluffing is certainly part of poker, sometimes you will be betting in order to get others, who may have better hands than you, to fold. This is especially true in tournament poker where stealing the blinds and antes is crucial for building your chip stack.

If your goal is to get others to fold, you can’t be timid. While a smaller raise can look like a big hand, you want to bet an amount that your opponent can’t call. However, keep in mind that each bet tells a story. While going all-in might be the largest amount you can bet, if it looks like you want a fold then you might get a call from someone who doesn’t believe you.

When Calling is an Option

While you should strive to play an aggressive style of poker, particularly when playing no-limit hold’em, there are situations in which it is best to just call pre-flop. Here are two examples:

There are times in which the strength of your hand, your position at the table and other situational factors dictate that it is better to limp into the pot. Being first to act is one of these times. However, the important concept to remember is that you should only be limping with a hand you can stand to call a raise with. An example would be limping in early position with a small pocket pair in hopes of catching a set.

If you find yourself in a situation where 3 or 4 players have already limped in, it’s often okay to call with certain types of hands – although it’s still important that you use good hand selection. Just because other people are playing doesn’t mean you can justify playing any two cards.

What you should take away while you are still learning to play is that when you are faced with a tough decision, calling is almost always the last choice. If you’re playing poker correctly, you’ll fold more than you raise and raise more than you call. That’s the ticket. Calling too often with mediocre and weak hands is a one-way street to a busted bankroll.

Remember to Always Ask Why

In poker there are many reasons to bet and one should always have a reason versus just firing out chips. Being aware of criteria such as position, knowledge of opponents’ tendencies, your current table image and the depth of stack sizes should help you identify what your objective is before proceeding.

To conclude, remember to always ask why. That is how you learn. Skilled poker players need to be astute enough to understand the wisdom in always asking why before proceeding. Have a plan and then execute your plan. 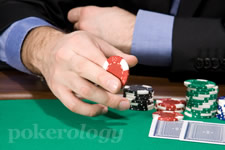 In poker there are many reasons to bet and one should always have a reason versus just firing out chips.