How to Play Razz

Razz is a simple game and the objective is to make the best possible low hand. The format of this game is the same as seven-card stud high but in razz only the lowest hand wins. If you’re familiar with seven card stud, just know that razz is essentially seven card stud, but upside down.

Here’s a brief overview of the rules of razz:

Under these rules the best hand in razz is ace, deuce, three, four and five – this is known as a ‘wheel’. Yes it’s a straight, but remember that straights and flushes don’t count in razz – it’s only the rank of cards that matters.

The Betting Structure of Razz

Razz is normally played eight handed and since it’s a stud game it’s played with a fixed-limit betting structure. The betting is almost identical to seven-card stud, a game we assume you’re familiar. Therefore in this next section we’ll only be highlighting the differences between the two games.

An example of a razz game, with antes being posted:

Here are two razz hands at a showdown. See if you can work out who wins?

. This makes a straight, but remember that straights and flushes don’t count for anything in razz. In this example hand B is our winner.

Similar to its high hand cousin, razz prizes live cards so the value of your hand rises or falls based upon what exposed cards you see around the table. Obviously, you want to start with three low cards and not see any of your outs exposed in an opponent’s hand. It also helps for small ranks that you already hold to be out as it minimizes you pairing that card. The minimum starting hand you should play against a strong group of starting players is three cards no higher than a seven.

Razz is a game of boards and it’s fairly easy to determine if you’re ahead in a hand or behind, which means that chasing low cards can be expensive. Likewise, if you have a bunch of babies on board, it’s tough for someone to call you who is showing a worse hand than yours.

As in all forms of poker, observe the tendencies of your opponents and adjust your play accordingly. Many players avoid this variation of poker as they find it very stressful to be dealt starting hands that would be excellent for high only. As they go on a run of pocket Kings, rolled up Queens and other starting hands which would be powerhouses in regular seven card stud, they tend to begin to tilt in razz. Be sure to keep your emotions in check when playing this game.

Razz has been around for a long time, but has seen a resurgence of interest since mixed games such as HORSE have become popular in recent times. There is no substitute for playing experience so the best way to learn how to play razz is to play it. Hopefully this lesson has given you a taste for the game. 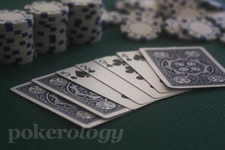 Razz is a game of boards and it’s fairly easy to determine if you’re ahead in a hand or behind.