No self-respecting poker player would dream of playing the game without a basic knowledge of strategy. Yet many players think nothing of sitting down at a poker table and risking prodigious amounts of money without understanding the human side of the game. Comprehending what goes on inside the minds of our irrational, flesh-and-blood opponents is just as important to winning as any mathematical formula. What’s more, the ability to look inward and recognize how your own thoughts and feelings influence the way you play, both for good and for ill, is crucial if you want to win at this game in the long run.

Having a feel for the psychology of the game helps you in two ways. First, the better you can read your opponent’s thoughts and feelings, the better you can read his cards. But even more important, a deeper awareness of your own personality enables you to play at your absolute best and side-step common pitfalls such as tilt. Opponents come and go, so we begin with the one player you can never get away from: you.

Poker players are some of the most delusional people on the planet. We don’t play too many hands, we just like to see flops. We didn’t raise at the wrong time; it was the opponent’s fault for not folding when he was supposed to. For every mistake we make at the poker table, there is an equal and opposite rationalization to explain it away. And when all else fails we can blame bad luck.

Competition brings out the fragile ego in all of us, but there is something about poker that makes losing even harder to take. Nobody enjoys losing money, but something even more important than money is at stake: pride. Poker is steeped in machismo, and to admit your opponent might be stronger, smarter, or just plain better than you is to admit a terrible weakness. The poker mind will go to incredible lengths to avoid such a revolting thought.

Make no mistake, confidence is essential. You can’t be a winning poker player without it. To withstand the brutal swings you must have faith in yourself. But when does confidence cross the line to become overweening pride? That’s where self-knowledge comes in. At the poker table, the ability to be uncompromisingly honest with yourself is worth its weight in gold.

Easier said than done, of course. Losing hurts, and to couple that hurt with the realization that the loss was your own fault is like pouring lemon juice on a cut. It will always be easier to blame a tough loss on a luckbox opponent than to contemplate the possibility we didn’t play the hand right.

No discussion of poker self-delusion would be complete without discussing tilt. When an otherwise intelligent, educated poker player begins to play below his skill level because of emotion, he is on tilt and almost invariably destined to lose a lot of money. Players on tilt throw their money away – by the handful or in a steady parade of small losses – because they’re making decisions based on anger and frustration instead of thinking things through. Tilt is the ultimate expression of poker self-delusion because players on tilt almost never admit that anything is wrong.

Step one is recognizing that you’re on tilt. This is no small task. A big part of accomplishing this is learning to recognize your tilt triggers, those irksome things that upset you enough to put you on tilt. A trigger can be anything from an obnoxious opponent to a particular type of loss – anything that gets under your skin and stirs up your emotions in a negative way.

Step two in overcoming tilt is to leave the game. Even if it’s just for a short while get up and do something else, anything else, so long as it doesn’t involve throwing your money away in a poker game. If you learn nothing else about yourself as a poker player, figuring out what puts you on tilt – and how to get away from the table when you are tilting – will save you a fortune over the course of your poker career.

Your Own Playing Style

To delve deep into your poker psyche, you need to think about your own poker playing style. It comes down to why you play poker in the first place. Do you play to socialize? Because you enjoy the thrill of competition? To prove something? Whatever the reason, or combination of reasons, your style of play is going to reflect that.

Self-honesty is the silver bullet. It does you no good to learn correct poker strategy if you won’t use that knowledge when it counts. You can read books, study hand histories, buy fancy software to calculate percentages for you – but nothing and nobody will ever make you into a first-rate poker player but you.

Between the recreational player who thinks nothing of losing money so long as he can have fun doing it, and the hard-core nit who hangs onto every chip for dear life, there’s a staggering variety of poker players out there. If you want to play the game at a higher level, you must be able to read them all. Only by reading your opponent can you put him on a range of hands, and only by putting him on a range of hands can you hope to make the correct decision most of the time.

The psychology of reading your opponents is as much as art as a science. Sure, we have the four major categories:

These groups are also commonly known as the rock, calling station, shark and maniac. The majority of your opponents can be pigeonholed into one of these groups. It’s crude, but it’s a place to start. Yet there’s much more to reading your opponent than just slapping a label on his forehead.

To being with, try thinking of these categories not so much as four separate boxes but rather as points on a spectrum. Or to be more precise, two spectrums. One spectrum runs the gamut from ultra-milquetoast passive to chip-spewing aggressive, while the other spectrum begins with the tightest of rocksand ends in loosey-goosey land. Job one is to figure out where each of your opponents weighs in on the passive-to-aggressive and tight-to-loose scales.

Everything we do – the way we move, speak, dress, groom ourselves, adorn ourselves, etc – says something about our personality. Aggressive players tend to be very forceful in every aspect of their lives: dressing in bright colors, speaking loudly, using language that’s harsher and more blunt, buying in for excessively large amounts. These players want to intimidate. They need to be the center of attention. And in a poker game nobody is more intimidating or attention-grabbing than a maniac. Easy to spot, tricky to play against, maniacs have a singular talent for putting their opponents on tilt.

Conversely, passive poker players refrain from conflict. Social by nature, they’d rather not rock the boat or rub anybody the wrong way – a considerable disadvantage in a game where the object is to take your opponent’s money. Tight players tend to be very deliberate and conservative in everything they do, dressing moderately, stacking chips neatly, talking seldom. Loose players are more freewheeling and impulsive, liable to be impatient, chatty, and sloppy with chips.

Beware of stereotyping, however. Few players will fit neatly into any given category. As for stereotyping according to age, gender, race etc, that’s a dangerous trap. While it’s probably true that the average 21-year-old male is going to play a lot more aggressively than the typical 50-year-old female, there are always exceptions and you should never lose sight of that.

Once you’ve got some sort of psychological read on your opponent, put that knowledge to use and adjust your play accordingly. Against a maniac, know there will be some wild financial swings in your future if you remain in this game. If you can’t handle that, leave. If you can, tighten up, reraise with your good hands, and above all don’t let him put you on tilt. If your opponent is too passive, be more aggressive. If your opponent is too loose, value-bet more and bluff much less. For every flaw, there’s an optimum way to exploit that flaw and it’s your job to find it.

Once you have a good understanding of yourself and your opponent, the real psych-out games can begin. This involves higher levels of thinking. Level 1 players only think about their own cards, while level 2 players at least ponder what their opponent is holding. Playing at level 3 means you consider what your opponent thinks you have. Obviously this is impossible without having a read on your opponent and more than that, a grasp of how your opponent is reading you.

You must be aware of your table image. Then if you can put yourself in your opponent’s shoes, figure out how he’s making decisions – and not how you would be making decisions if you were in his place – you’re ready to play poker at a higher level. To go even higher, level 4 asks the question: “What does he think I think he has?” Assuming your opponent is also playing at a high level of thinking, the mind games between the two of you can go on almost indefinitely.

There are several factors that play into a successful bluff, but ultimately the bluff lives and dies based on the player it’s aimed at. If he senses what you’re up to, if he’s got a stronger hand than you figured, if his confidence is inflated by a few recent wins, you’re done. It’s not just about bluffing weak players; it’s about bluffing players who are feeling weak in that moment.

Some of this is purely tactical. Before pushing out any bluff you should always consider position and stack sizes. But part of knowing when and who to bluff is pure psychology. Any time you get the sense that your opponent’s spirit is weakened – because he just endured a tough loss, perhaps – that’s often a good time to strike. By the same token, be aware that any time you’re in a sheepish frame of mind and playing more passive, opponents are more likely to aim bluffs in your direction.

Psychology is no substitute for cold hard poker math. But psychology can add an incredible depth to your game, and to your wallet, when it’s used in conjunction with solid poker strategy. It creates a one-two punch that is virtually unbeatable. By opening up your eyes to the human side of the game, even as you continue to calculate odds, there’s no reason you can’t have the best of both worlds. 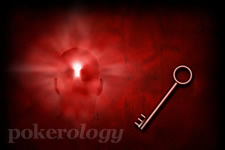 Once you have a good understanding of yourself and your opponent, the real psych-out games can begin.