In this lesson you’re going to learn the first and most important step about how to play poker by learning the all important poker hand rankings.

Hopefully all these points will make perfect sense by the end of this lesson.

Poker Hands (from Best to Worst)

Be sure to pay close attention and memorize the poker hand rankings. Let’s start with the best possible hand in poker….

A Royal flush consists of five cards of the same suit, in sequence from 10 through to Ace. Remember that all suits are equal in poker. If two or more players hold a royal flush (highly unlikely) then the pot is split, i.e. the players share the winnings.

Four of a Kind

This hand contains four cards of the same rank/value. This example shows four 8’s, plus a 5 (remember that all poker hands must have five cards). If two or more players have four of a kind, then the highest value wins (e.g. four 9’s beats four 8’s). If two or more players share the same four of a kind, which can happen when using community cards (more on that later) then the winner is decided by the fifth card. So a player with four 8’s and a 6 would beat a player with four 8’s and a 5.

Five cards of the same suit in any order. Our example shows a Queen high flush. If two or more players have a flush then the player with the highest ranked card wins. If the players share the same high card then it’s determined by the value of the 2nd, 3rd, 4th, and 5th card respectively.

Three of a Kind

A paired hand contains two cards of matching rank, plus three additional cards. The value of the pair determines who wins in the event of a tie. For example a pair of 10’s beats our example hand. If players share the same pair then the best hand is determined by the value of the highest additional card. If this is the same then it goes to the second card, and if necessary the third. So, a pair of 9’s with an Ace, 2, and 10, would beat our example hand. As would a pair of 9’s, King, 10, and a 3.

If a hand doesn’t fall into any of the above categories, then it is judged on the value of the highest ranked card among the five. In this example we have a hand which is Queen high. If players share the same highest card, then it goes to the value of the 2nd, 3rd, 4th, and even 5th card if necessary. A hand of Queen, 10, 9, 5, 4, would beat our example hand.

As you already know, a poker hand consists of five cards. In many variations of poker, players receive or can choose from more than five cards. For example, in Texas Hold’em each player is dealt two private cards, but can also use the five community cards that are available for all the players to use. This makes a total of seven cards, but each player must choose their best five cards to make their best possible hand. Here’s an example:

In the above example, the best five cards among total of seven (two private cards and five community cards) would be combined to make a flush.

If you don’t fully understand the poker hand rankings then please read through the list again. It’s vital that you know which hand beats which. Of course, how good a poker hand is, is very dependent on which type of poker game you are playing and other factors such as the number of other players you are playing against. You will learn the true strength of a poker hand as you gain experience of playing the game.

We have created a printable poker hand rankings chart that you can use as a source of reference. Hopefully we’ve explained the poker hand rankings to you well enough whereby you don’t need this chart, but it still might be handy for some. The chart will load as a PDF (link opens in a new window) and you’ll need to have Adobe Acrobat installed on your computer to be able to view it.

Make sure that you memorize the poker hand rankings before moving onto the next lesson. 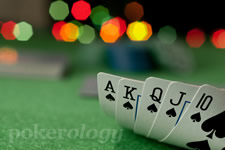 You will learn the true strength of a poker hand as you gain experience of playing the game.