This lesson assumes that you have a solid grasp of all the fundamental concepts involved in poker. Of these concepts, understanding position is arguably the most important because you are able to make decisions after you’ve gathered information from your opponent(s). As you progress and develop as a poker player, some of the largest gains in improving your game will come from increasing confidence playing position. It’s easy to play your strong hands, but it’s the ability to use position and play poker regardless of the strength of your hand which separates the good poker players from the great ones.

Keep in mind that in any poker game, you must play the tendencies of your opponents first. Making a move in position is irrelevant if the person you are playing with isn’t capable of putting you on a hand. Having said that, the concepts addressed in this lesson assume your opponent is at least capable of second level thinking – which is to say that in addition to his own cards, he’s also thinking about what you were dealt.

We’ll start by looking at some poker strategies and tactics that can be employed pre-flop by using the power of position. Be aware that one or two of the strategies that follow are more focused on tournament poker than cash games due to the increased emphasis on pre-flop action.

Irrespective of the poker variant or format, it’s common knowledge that leaning toward the side of aggression is more profitable in the long-run. One way to use aggression is to buy position. Let’s say one or two players have limped in ahead of you and you hold a hand like AJ, KQ or 77 in middle position. Depending on stack sizes and your reads you can certainly make an argument for calling, folding or raising. However, by calling you will often induce others to limp behind you, giving up position, and now you are forced to play based solely on whether you connect on the flop or not. By raising, you can force the players behind you to fold and you have now bought position after the flop.

Many players re-steal from the blinds after someone in late position raises. This is most common in tournament poker. Players frequently re-steal from the blinds because they assume the late position player is stealing and cannot stand a re-raise. However, re-stealing has become more common from the blinds and people’s games are adjusting to steal from earlier positions such as the hi-jack and middle position so they give the appearance of having a bigger hand. This is where having position comes in. By re-raising from the button or cut-off position, it looks like a very strong hand. It puts significant pressure on the blinds and they will often fold a hand as strong as AQ and mid pocket-pairs. In addition, it also tells the original raiser that you have a real hand. Again, this goes back to reading your opponents. Don’t re-steal against the tightest player at the table or someone whose raise has committed them to the hand. Pick your spots versus opponents who are aggressive, have a wide range pre-flop and are capable of folding to a re-raise.

Another benefit of having position is being able to get into pots with hands that have heavy implied odds against a pre-flop raiser. These might be suited middle connectors, small pocket pairs or low suited connectors like

. In these cases, you are calling a raise in position because it gives you multiple ways to win the pot. If you hit your hand, it will likely be well disguised and you can win a big pot. But more importantly, it also gives you the chance to outplay your opponent if you do miss your hand because you can make your play based on observing their actions first.

Freezing isn’t necessarily a poker play; it is simply another benefit of having position. By calling your opponents raise when you are in position it can freeze them in the hand. Their intention was to steal the blinds and now that you’ve called, they are going to proceed with caution. Calling the raise from an opponent who often raises in middle or late position can have both short term and long term benefits. In the short-term, they may put the brakes on and allow you to take down the pot post-flop. The long-term implication of this is that it sets a tone at the table that if they come in raising, they will have a fight on their hands, thus deterring them from stealing.

A squeeze play occurs when an aggressive player opens the pot, someone calls them in position and another player (often in the blinds) re-raises. A squeeze play is most effective when the original raiser has a loose range, the caller tends to be passive and the stack sizes involved do not commit the other players. The re-raise puts pressure on the original raiser because he’s not sure what the middle player is going to do and you are effectively “squeezing” the middle player. If the middle player had a very strong hand, he would have re-raised in the first place. Caution: squeeze plays should be used sparingly and rarely at low buy-ins. In low buy-in poker games, the middle player will call very often because they feel committed to the hand and feel the need to “look you up”. Make sure you have a good read on both players to maximize the effectiveness of this poker play.

In certain situations, you can use position pre-flop to trap your opponents into thinking you are not strong. Ever since “Harrington on Hold’em” described the squeeze play people have added this into their poker arsenal. Because of this, you can use position to trap aggressive players in the blinds by calling a raise with a big pair such as KK or AA, inducing the player to re-raise over top. Use this play with caution, however, as the big blind will be getting good odds to enter the pot.

We’ll now look at some of the key concepts of using position post-flop. These strategies and tactis are suitable for both tournament poker and cash games.

Floating refers to calling a flop or turn bet when in position in order to take the pot down on the next street, and is used in three primary situations:

Let’s start with pot control. Suppose you call a raise in position with a mid-pocket pair such as 88 and the flop comes A64. Your opponent may or may not have an Ace, but they are betting the flop regardless. By calling here, many opponents will shut down on the turn for fear that you have an Ace. You can certainly raise here to see where you stand, but depending on your stack size, calling may be better so that you control the size of the pot.

Using the float play to bluff can be effective when you know that you are up against an aggressive player who almost always makes a continuation bet. You can call the flop with a wide variety of hands in order to read how your opponent reacts on the turn. Floating for this purpose becomes even more powerful if there is an obvious draw on the board, since you can represent the hand if it hits.

This same tactic can also be used to set a trap. Let’s say you flop a set or some other strong hand and you are up against an aggressive player who is capable of firing on the turn. While raising the flop might sometimes be the better play depending on your opponent; just calling the flop can make your opponent think you are weak (i.e. floating with a mid pocket pair) and cause them to bet the turn strongly.

Just as you might float versus an opponent who you think might be making a continuation bet, you can also mix up your game and raise the flop as well. In this case, the assumption is that we have also missed the flop and are bluffing in hopes of getting our opponent to fold. Having position affords you the ability to read if your opponent is making a continuation bet based on his bet sizing and the texture of the flop.

You can also use the power of position against a player who bets out from the blinds. A player will often catch a piece of the flop or have called a raise from the blinds with a pocket pair and will place a small bet on the flop to “see where they are at”. Position affords you the ability to tell them exactly where they are – behind (or at least this is what we want them to think). This play is most effective if you originally raised pre-flop because you are continuing to represent a strong hand.

There are many ways to use position to your advantage. Poker players, for the most part, are acutely aware of the value of position but many squander it unless they believe they have a worthy hand to play. Position should be used as a weapon and only squandered when it appears hopeless to become involved. Position is a strong factor and when you possess it, all things become easier.

The concepts explained in this lesson are really just the tip of the iceberg. The only way to improve at poker is to trust your instincts and put yourself in situations where you can use position to your advantage. Once you have successfully made plays by using your position (and not relying on the strength of your cards) your confidence will grow and your ability to outplay your opponents will skyrocket. 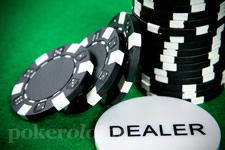 Position should be used as a weapon and only squandered when it appears hopeless to become involved.