This is my favourite starting hand in Omaha/8 since it gives top pair, two nut flush draws and a great draw to the nut low including counterfeit protection. Counterfeit protection means that if an ace, deuce or trey hits the board you still have the two best low cards to put with it. As an example, if the final board was K-2-5-Q-4, your deuce would have been counterfeited but you would still have the nut low (using one of your aces and the trey) as well as a straight. If three of the cards were either clubs or spades, you would have the nut flush for high with a wheel (five-high straight) for low. This would be a very good holding hoping to scoop the entire pot. If another player held the nut low as well but your high hand was the winner, you would win three quarters of the pot made up of the high half and half of the low half.

While this Omaha/8 hand offers no low possibility, since you must use two cards from your hand, it does offer two nut flushes, straight possibilities with two different high pairs which could make sets and then, if the board pairs, very good full houses. This is the type of hand where you hope that no one qualifies for low and you can scoop the pot with just a winning high hand. However, there’s a danger in flopping a set with your pair of aces, or with any pair that’s eight or lower. The danger is that you’ve already put one low card on the board, and you may be vying for only half the pot instead of all of it.

This is an excellent Omaha/8 starting hand because you have four low cards offering double counterfeit protection coupled with straight draws and the nut flush draw. Having the three and four suited does not add value as a four high flush with three of that suit on the board is really a liability and not an asset.

This hand provides no possibility of a low hand so you would definitely like to see all high cards on the flop including a ten. There are also two flush draws, one to the nut and the other to the second nut. This is the kind of hand that, if no or only one low card flops you need to raise and re-raise to make it very expensive for low hands to chase in order to qualify. The object here is to scoop a one way pot for high. In fact, if you’re in late position and a number of players have already entered the pot, you should raise. Most of your opponents will play low hands, and a large number of opponents points to a deck that is presumptively rich in high cards, which favor your hand. So go ahead and get more money in the pot. If the flop contains big cards, you are likely to scoop. If it contains all low cards, you can easily release your hand.

This Omaha/8 hand offers the opportunity of a nut flush, nut low and straight draws. With a pair you can also flop a set or even quads. Counterfeit protection is part of its upside as well. This is a good hand that is not quite a powerhouse.

While you usually want an ace in your hand this Omaha/8 hand represents very good counterfeit protection. Obviously, you would like to see an ace and two small cards hit the flop which would give you a nut low. The straight draws enhance the value of this starting hand. You’ll notice this isn’t double suited since getting a four or five high flush is really of no value. This hand’s value is in straights and lows with counterfeit protection.

Playable with Some Caution, Starting Hands

This is an example of a playable Omaha/8 hand where caution should be exercised. While there are two flush draws and a myriad of straight draws they are all somewhat problematic. In an action game like Omaha/8, where there is frequent raising, it can be very expensive to wind up with a second best hand for high or low. With a hand like this, if you make a low hand, it is unlikely to be the best low, and even a straight may not be the nut straight. Moreover, any flush you make may not be the best flush either.

This hand is a far cry from the two pair hand of A-A-K-K which was highlighted in the powerhouse section. While it looks good, including the straight possibilities and jack-high flush draw, caution is recommended anytime you’re not drawing to the nuts. It doesn’t mean you shouldn’t play them, but it does mean you should be a bit cautious when you do.

Here is another hand that on the surface looks pretty good with draws to both a king- and queen-high flush, straight draws, and two good low cards. While the winning hand can certainly be made with this start, the hand can also lead to trouble with a capital “T”. This hand exemplifies just how important an ace in your starting hand really is. You cannot make a nut flush or a nut straight or a nut low unless an ace comes on the board.

I’ve offered up three examples in each of the three categories to highlight what I believe represent the powerhouses, just good, as cautiously playable starting hands. Obviously this is not meant to be a complete listing but to give you a sense of the upsides and downsides of Omaha/8 starting hands. As with all forms of poker, your starting hand values need to be viewed in concert with your position, the texture of the game, your opponents’ playing styles, as well as your own style and the degree of risk you enjoy. 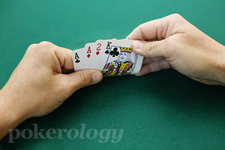