How to Play Omaha

Omaha is a board game similar to hold’em in so far as there is a flop, a turn card, and a river card. Learning how to play Omaha is simple if you’re familiar with Texas hold’em. In this lesson we’ll frequently compare the differences between Omaha and Texas hold’em, so it’s assumed that you are familiar with the game.

In Omaha each player receives four starting cards versus just two in hold’em. Of these four cards two must be used with any three from the board to make your best five card poker hand. This is something that beginners often forget – and such rookie mistakes can prove expensive.

. However you don’t have a flush since you must use two of your hole cards and three board cards to make your hand. This is different to hold’em, where a player is permitted to use both of their hole cards, only one, or none and just play the board.

A flush is only possible in Omaha if a player has two of that suit among his four cards. In this particular example the best Omaha hand you can make is;

– which is one pair.

The fact that you must use two cards from your hand and three from the board in Omaha, means you can quickly see that being dealt four of a kind is really a very poor hand as you only have a pair and both your key outs are dead.

Receiving four cards and being forced to use two of them in your hand results in your hand having six possible variations. In a nine handed hold’em game there are nine possible hands competing for the pot. In a nine handed Omaha game there are actually fifty four possible hands lurking out there. This dynamic makes for several changes in your approach to playing winning Omaha versus hold‘em. Let’s review several of them:

The nut hand in Omaha is very often held by one of the players due to the aforementioned dynamic. This can be very treacherous for a newcomer to Omaha who is accustomed to playing hold’em. The nuts will be shown down much more frequently in Omaha. This means that your hand values need to go up or you are destined to become a donator. Knowing this is one thing but adhering to it is quite another. With six possible hand combinations, many players have difficulty getting away from marginal hands.

– which is double suited. This way you would have two nut flush draws and two individual high pairs. You do not have two pair as you can only and must use two cards from your starting four with any three cards from the board.

With all players having six combinations in their starting four card hands, you can imagine that there are usually plenty of draws lurking about. As a rule of thumb you should usually abandon straight and flush draws that are not to the nuts. Drawing to the second nut draw in Omaha can be a very costly endeavour. While you may play somewhat looser pre flop based upon the multiple combinations of draws, once you are able to confirm that your draw is not to the nuts it should make you tighten up considerably. While discipline is a vital characteristic for playing all forms of poker well, Omaha demands restraint in order to be successful. Many players are unable to summon this level of dedication to purpose so Omaha can be profitable for the stronger willed among us.

Again, due to the multiple variations in a four card starting hand you gain the benefit of additional outs. While multiple draws occur in hold’em they become almost common place in Omaha. This again is the reason that the best Omaha starting hands utilize all four cards. If half of your starting hand is useless, you are spotting your opponents too much edge.

While implied odds are an important consideration in all forms of poker, the importance they hold in no-limit hold’em is far and away more critical than in Omaha. This is because the other players are aware that the nuts get hit more often and therefore become reluctant to pay them off. If you’ve become accustomed to using implied odds to bolster your drawing rationale in other forms of poker, temper their use in Omaha.

Reading opponents’ hands becomes a real challenge in Omaha due to the multiple combinations of each four card starting hand. My advice is to give your opponents more credit for hand values than you might in other forms of poker. This is true because there is less bluffing in Omaha since most players realize the nut hand is often out. Always being aware of what the current nut hand is will serve you well in Omaha.

These elements highlight the major differences between Omaha and hold’em and prepare you for understanding some key Omaha strategy concepts which will be outlined in our other lessons on Pokerology.com. 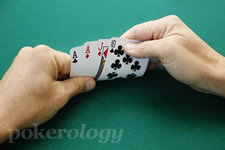 As a rule of thumb you should usually abandon straight and flush draws that are not to the nuts.